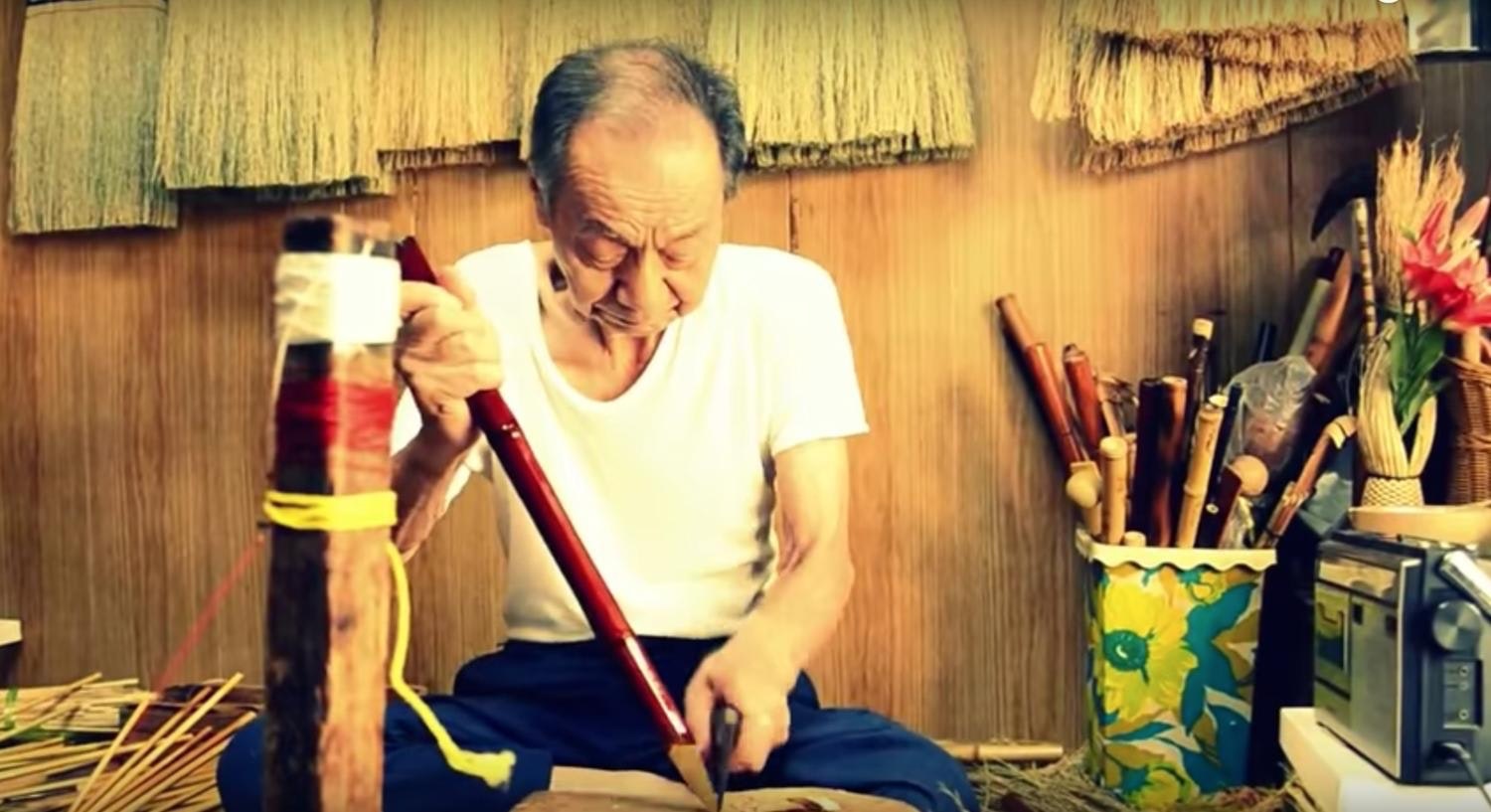 The PR Video for Edo Houki

Katsumi Arai himself is the second generation to make Edo Houki, a traditional craft handed down from the Edo period, and has been making it for 60 years.
At present, there are only two broom craftsmen in Tokyo, Katsumi Arai and the craftsman from the old Edo Houki shop, Shirakiya Denbei.

This video features broom maker Katsumi Arai working in peaceful silence.
His handiwork and craftsmanship is remarkable.
Take a look at the techniques of a craftsman who has preserved a tradition handed down from one generation to the next.

Edo Houki are said to have originated near the end of the Edo period (1603-1868) when the Shirokiya Nakamura Denbei Store, founded in 1830, began making brooms from a plant called "Houkimorokoshi."
Since then, Edo Houki makers have improved their brooms to be lighter and more comfortable to use.

There are two type of brooms: “Niwa Houki,” for outdoor use, and “Zashiki Houki,” for indoor use.
Both types of brooms were must-have items back in the day.

There used to be 40 to 50 Edo Houki shops in Edogawa-ward, but the number of shops has decreased as of late due to vacuum cleaners being more popular, as well as there being fewer Japanese style rooms.
The historical culture of traditional craftsmanship, that has continued for nearly 200 years, has been handed down to Mr. Arai Katsumi.

How to Make Edo Houki

This video clip features the manufacturing process of an Edo Houki.

First, broom makers separate the houkimorokoshi which will be used to make the brooms, into high-grade and low-grade.
This sorting process is very time-consuming, as it has a significant effect on the finished product.
After the sorting process is completed, they soak the houkimorokoshi in water to soften the tips of the ears.
The process involves wrapping hemp thread around the stems and tying them tightly.

After that, a certain amount of houki grasses are bundled together.
Two or more bundles are threaded onto a skewer and wound together.
You can see this crafting process in the video at 0:21.

The thickness of houki grasses varies widely. Whether or not the appropriate materials are selected depends entirely on the skills of the craftsman.
It may seem easy, but it requires a lot of experience and skill.

After they're tied, a long handle is attached to them.
You can see this scene in the footage from 4:55.

The craftsman uses a string and wire to attach a long handle.
The knot is tied tightly so that it will not come off, and sometimes it is adjusted by tapping it with a hammer.
You can see how difficult this is in the footage from 5:54.
All process, including Kushigata (the process of decorating it) are conducted by the craftsman.
Every step shows the skills of a master craftsman who has inherited the culture of a traditional craft.

Thoughts of an Edo Houki Craftsman

Making Edo Houki requires a lot of physical strength.
According to Katsumi Arai, while he is called a craftsman, he does not see himself as one.

During the 1960s and the 1970s, electric vacuum cleaners began to become popular, and today, automatic vacuum cleaners such as the Roomba are available.
The demand for newer, electric, and even automatic cleaning devices, created an unfavorable market for the traditional Japanese craft.

However, in recent years, Edo Houki have been given as gifts, presents, and souvenirs by those overseas, and the commercial value of Edo Houki has increased to the point where it is now considered a work of art and traditional craft.

What are the advantages of using a traditional Edo Houki in the age of modern vacuum cleaners?
First, it's quiet.
Second, it's effective at removing dust from tatami.
And lastly, you can feel the traditional culture of the Edo Period in its handle.
Because of this, the Edo Houki, which is guaranteed to last 10 years, is being reevaluated by many.

If you're interested in Edo Houki, be sure to check out some online shopping sites like Amazon or Rakuten.
The price range of Edo Houki ranges anywhere from several thousand yen to up to 10,000 yen (~$10-$100 USD).

Give the traditional Edo craft a try!