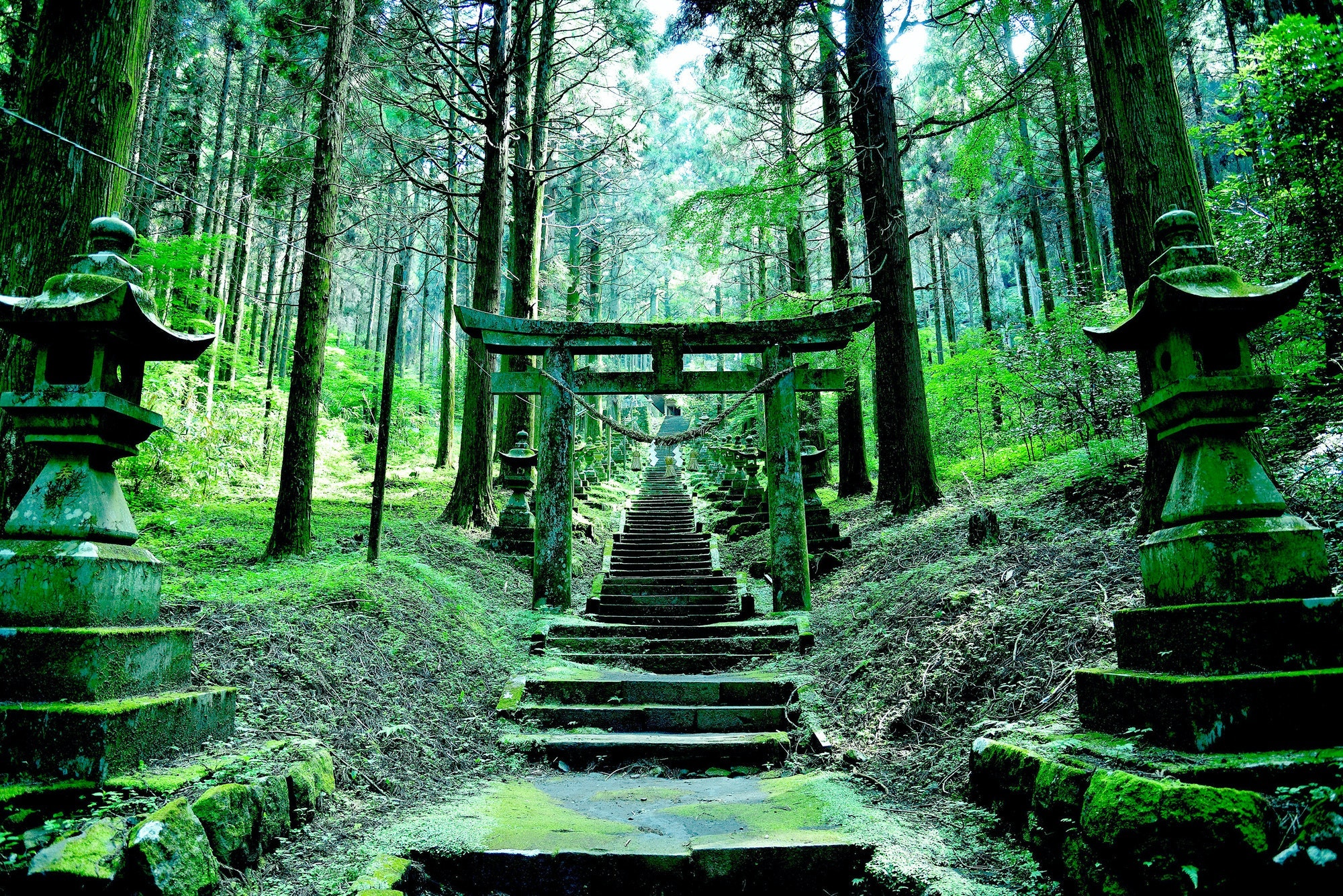 Kamishikimi Kumanoimasu Shrine: The Setting for a Popular Anime, This Shrine in Kumamoto Prefecture Is a Must-See for Anime Fans. Enjoy the Mystical Atmosphere That Will Transport You to Another World!

Hakone Shrine - Introducing the Highlights of the Popular Power Spot and Tourist Destination in Kanagawa Prefecture, Where Many People Come To Seek Good Luck!

Itsukushima Shrine Is a Popular Spot in Hiroshima You Don't Want to Miss! The Vermilion-Lacquered Torii Gate Over the Sea Is a Fantastic Sight, Chosen as One of the Three Most Beautiful Sights of Japan!

Hiraizumi's Chuson-ji Temple: Registered as a World Heritage Site, It's One of the Most Popular Spots to See Iwate Prefecture as Its Dyed a Brilliant Red by the Autumn Foliage

There are numerous shrines throughout Japan.
Just counting those registered with the Ministry of Education, Culture, Sports, Science and Technology (MEXT), there is said to be 85,000 shrines, and if counting smaller shrines that aren't registered with MEXT, then that number rises to 100,000. AND, if you count the small wayside shrines throughout the country, there is said to be more than 200,000 shrines across Japan!
Shrines have a history of being created as ritual facilities for the belief in Japan's indigenous religion, Shinto.
Some of the older shrines were placed under the control of the Jingi-kan (Department of Shinto Affairs) officials. These were called "Shikinaisha" (式内社). Others, not under the control of the Jini-kan were called "Shikigaisha" (式外社).

It is said that Japan is home to eight million gods, and natural landscapes, such as mountains, rivers, lakes, and marshes, were worshipped by many.
There are also many shrines that enshrine deities from myths and legends, real people, animals, and more.
Shrines were sometimes used for Buddhist beliefs as well as Shinto facilities.
There were also shrines influenced by Shugendo and Onmyodo, as well as shrines with original beliefs, such as Yoshida Shinto.
Post-modern shrines are considered to be institutions of the State religion Shinto, and furthermore, today's shrines have been reorganized as religious facilities.
Many of the shrines now operate as religious organizations affiliated with the Association of Shinto Shrines.
That being said, many shrines, such as Yasukuni Shrine, Fushimi Inari Shrine, and Nikko Toshogu Shrine, operate as stand-alone religious institutions.

Shrines were ranked in accordance with the "Kindai shakaku seido" (近代社格制度, modern shrine ranking system) in the early Meiji era (1868-1912).
Although the shakaku ranking system was abolished in the Showa period, it is still considered a standard for the ranking of shrines.
Also, shrines, called "jinja" (神社) in Japanese, are also called "shago" (社号).
Major shrine names include "Jingu," "Tenmangu," "Taisha," and "Miya."

The symbol of a shrine is the large torii gate at the entrance.
The torii gate is said to represent the boundary between the sacred grounds of the shrine and the secular world.
The forest around the shrine is called "Chinju-no-mori" (鎮守の社), and large trees that have been growing since ancient times are often tied with a shimenawa (標縄, enclosing rope) and honored as sacred trees.
After passing through the torii gate of the shrine, there's the approach to the shrine, and along the mountain path, there are many highlights, such as the "chozusha" (a place for purifying one's hands, a sacred pond, and a sacred bridge.
There are two types of main shrine halls: the Honden (本殿) and the Haiden (拝殿), with guardian dogs and lanterns placed in front of them.

There are also various other buildings on the grounds of the shrine, such as the Kagura-den (神楽殿), the Maidono (舞殿), the Ema-den (絵馬殿), the Heiden (幣殿), and the Shamusho (社務所, shrine office).
These buildings are managed by the Shinto priests and chief priests.
In many cases, auxiliary shrines are built on the grounds of a shrine, where gods related to the shrine are enshrined, or there are subordinate shrines, where gods not directly related to the shrine are enshrined.

Many of Japan's shrines are in pairs, known as the "two-shrine system." These include the kami-sha (上社, upper shrine) and the shimo-sha (下社, lower shrine).
Some shrines even go by a three-shrine system.

Kamo Shrine: This shrine consists of two shrines- Kamigamo Shrine and Shimogamo Shrine.
Suwa Taisha: The kami-sha and shimo-sha are located on the north and south sides of Lake Suwa.
Kumano Sanzan (Three Grand Shrines of Kumano): Kumano Sanzan is composed of Hongu Taisha, Hayatama Taisha, and Nachi Taisha.
Munakata Taisha: Consists of the three shrines, Hetsumiya Shrine, Nakatsumiya Shrine, and Okitsumiya Shrine, as well as Okitsumiya Yohaisho located in the northern part of Nakatsumiya.
Niu Kawakami Shrine: Originally a single shrine, Niu Kawakami has been divided into three shrines: the kami-sha, naka-sha and shimo-sha.
Akiha Shrine: Akiha Shrine refers to two shrines: an upper shrine located near the summit of Mt. Akiha, and a lower shrine located near the foot of the mountain.
Fujisan Hongu Sengen Taisha: The Hongu (main shrine) is located at the foot of Mt. Fuji, with the Okumiya (rear shrine) at the top.

The Architecture of Japan's Shrines

It is important to remember proper etiquette when visiting a shrine.
When passing through the torii gate of a shrine, take a bow and walk through the gate without stepping on the threshold.
It is said that the center of the approach to a shrine is where the gods walk, so you should try to avoid the center and walk along the edges.
At the shrine's chozuya, take the hishaku (柄杓, ladle) in your right hand and pour water over your left hand to purify it, and then change the ladle to your left hand to purify your right hand.
Next, take the ladle again in your right hand and pour water into your left palm to purify the mouth.
After that, purify your left hand, wash the handle of the ladle, and return it to its original position.

At the main hall of the shrine, first give a slight bow, then place your money into the offeratory box and perform "ni-rei ni-hakushu ichi-rei."
Ni-rei ni-hakushu ichi-rei (二礼二拍手一礼) is a method of worship that involves two deep bows, two claps and a prayer, followed by one more bow.
This method of prayer is only done at shrines, and not at temples, so it's important to remember to distinguish between the two.

A Ranking of Japan's Most Popular Temples and Shrines

As one of the world's largest travel information sites, Tripadvisor has released a ranking titled "Travelers' Choice: Top 30 Temples and Shrines in Japan 2019."
The top 30 shrines and temples in this ranking include famous shrines, temples, and some unique lesser known shrines.

Take a look at the temples and shrines listed here and be sure to make note of the spots you're interested in.

What to Do When Visiting a Shrine in Japan

The people who build shrines in Japan are known as shrine carpenters.
In addition to building culturally significant shrines, temple carpenters are also responsible for major repairs.
At Japan's shrines, be sure to take a close look at the beautiful Japanese architecture created by the craftsmen.
There are a number of shrines in Japan that are known as "power spots" as well, so be sure to stay on the lookout for them.
After visiting a shrine, you can receive a good luck charm or write your wishes on an ema as well.
Sometimes you can even draw a fortune at the shrine.

If you plan on visiting many shrines, you can also receive goshuin (御朱印, temple seal) stamps in your goshuincho (御朱印帳, temple seal book).
Shops selling Japanese sweets, specialty foods, and souvenirs are often open near shrines.
Buying some of these delicacies is a great way to remember your trip.
If you want to take a closer look at traditional Japanese architecture or enjoy the solemn atmosphere that only temples and shrines can provide, be sure to visit one of the many temples and shrines scattered throughout Japan.
We also recommend checking out our videos to get a taste of the beautiful atmosphere of Japan's shrines.
Check out the various videos and find your favorite shrine!