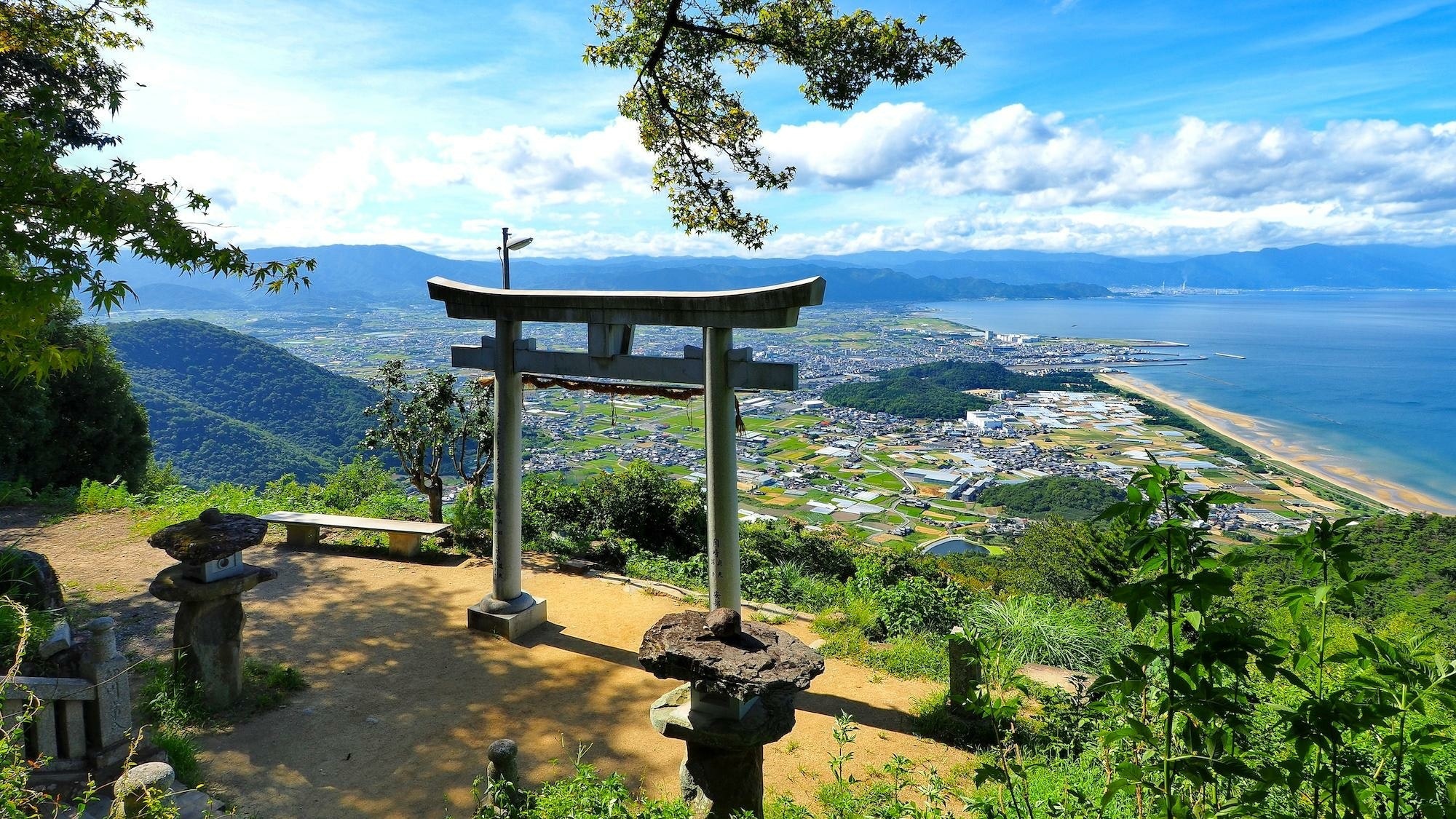 The Torii in the Sky: Takaya Shrine Video Introduction

This video, titled "A Spectacular View of Takaya Shrine's Torii in the Sky at Sunset in Kanonji, Kagawa" (話題の絶景…高屋神社「天空の鳥居」からみる圧巻の“夕日” 香川・観音寺市), was uploaded by "Setonaikai Broadcasting" (KSB瀬戸内海放送).

A Spectacular Sunset From the Torii in the Sky

Takaya Shrine is located at the summit of the 404-meter-tall Mt. Inazumi, between the cities of Kanonji and Mitoyo in Kagawa Prefecture. The torii gate of the main shrine is called "Tenku no Torii" (天空の鳥居, "The Torii in the Sky") in Japanese. From the torii, visitors can look out over the city of Kanonji and the Seto Inland Sea. Beyond the torii, the sea and sky can be seen and it truly feels like you're floating in the sky. It's also a popular power spot for beautiful sunsets.
[Video] 0:21 - The View Overlooking the Seto Inland Sea

The torii gate, sea, and sky, create a world reminiscent of the movie "Your Name." It's not a film location, but it's a popular spot for tourists on Instagram. The video also shows the sunset, so be sure to check it out.
[Video] 】0:47 - Sunset at Takaya Shrine

Takaya Shrine at the top of Mt. Inazumi

Takaya Shrine, also known as "Inazumi Shrine" or "Inazumi-san," sits at the top of Mt. Inazumi and is a well-known local shrine; in 2018, it was selected as one of the 88 Views of Shikoku.
Climbing up from the lower shrine to the main shrine, you'll find the middle shrine on the way. The view from each of the torii gates is so spectacular that you'll want to stop and take a look. There are a total of 270 stone steps 'til you reach the top, and if you're lucky, you may see a wild rabbit on the way up. In spring, the large festival "Takaya Matsuri" is held, with a parade of drum stands amidst the blooming cherry blossoms and lion dances. The deities of the festival are Ninigi no Mikoto, Ukemochi, and Konohana Sakuya. The deities are believed to provide maritime safety, protection from floods, traffic safety, safe childbirth, a good harvest, and prosperous business.

Things to Do Near Takaya Shrine

In addition to Takaya Shrine, there are many other places to enjoy sightseeing around Takaya Shrine in Kanonji. There's a campground, an athletic park for hiking and climbing Mt. Inazumi, as well as a beach for swimming and clamming.

After experiencing the world like "Your Name" at Takaya Shrine, consider checking out the surrounding area. To get to Takaya Shrine, you can take a shared-ride bus or community bus from JR Kanonji Station. To get there by car, take the Sanuki Toyonaka IC and follow the signs. Parking at Takaya Shrine is free of charge, but please note that there are times on weekends and holidays when private cars are restricted.

Summary of Takaya Shrine, the Torii in the Sky

Takaya Shrine in Kagawa Prefecture offers a mysterious and beautiful view. Visiting this shrine standing in such a beautiful place will put your heart at ease.

Taking photos with the Torii in the Sky and the setting sun is truly a magnificent experience. The photos are great for Instagram too, so be sure to take a bunch! If you need some inspiration, check out the video for an idea of some of the different angles you can try.
[Video] 0:28 - The Torii in the Sky and Blue Seas at Sunset

The video also features an interview with a man who came to this location after learning about the Torii in the Sky on the Internet. It's truly a spot to throw on your bucket list.

鈴木実鈴（Misuzu Suzuki）
Well-paced, easy-to-read writing for everyone! I am writer and a mother.
SUBSCRIBE