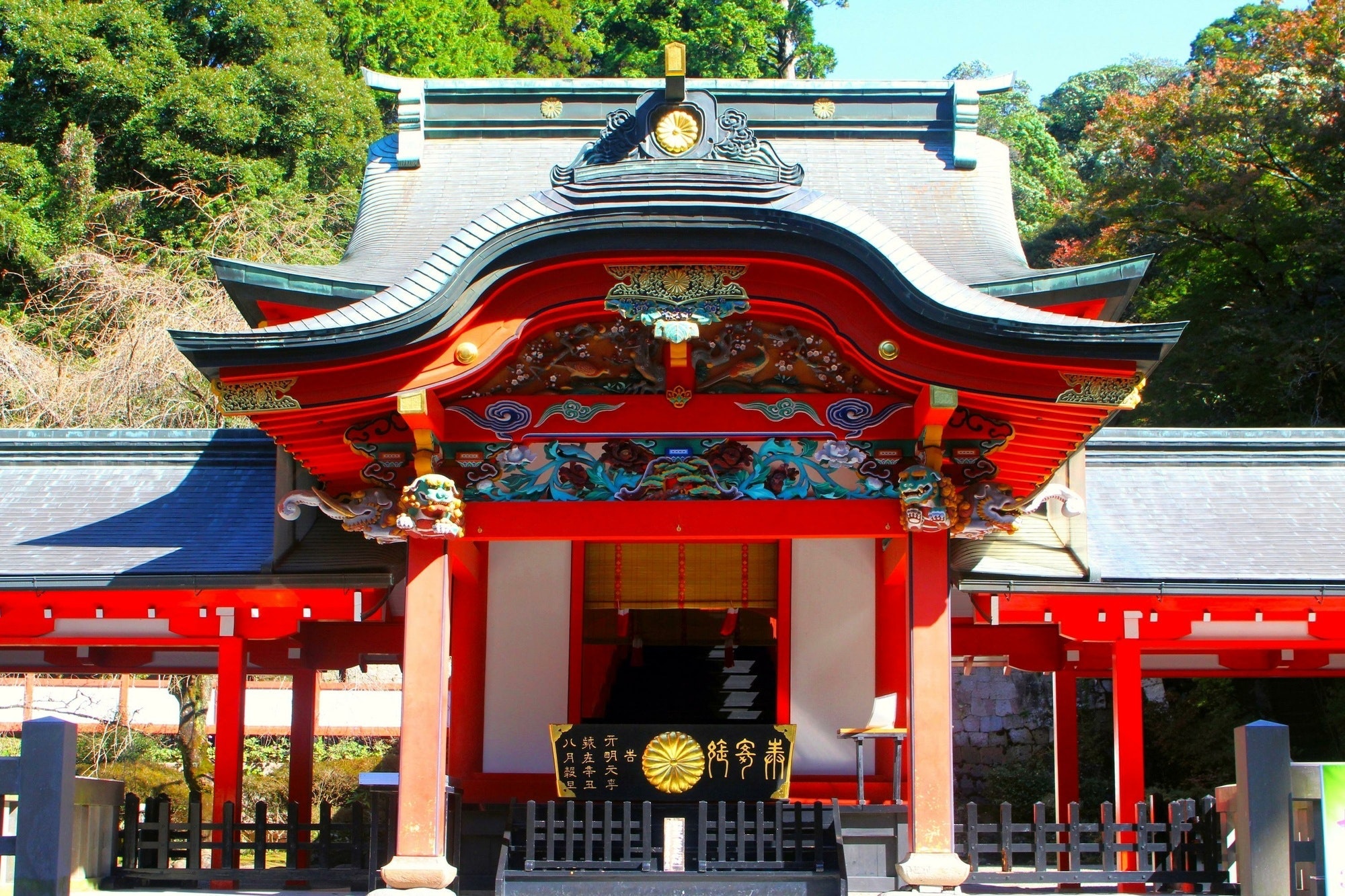 As you can see in the video, Kirishima Shrine's main building is surrounded by nature and is the perfect place to enjoy the beautiful colors of the fall foliage.
Throughout this 8-minute long video, you can take a look at the grounds of Kirishima Shrine in 4K while listening to the accompanying background music.
Be sure to follow along with the video to experience how it feels to take a trip to Kirishima Shrine!

More About Kirishima Shrine and Its History

Kirishima Shrine is located in Kagoshima Prefecture and was founded in 540 AD making it an extremely historical and important shrine in Japan.
It was initially built during Emperor Kinmei's (欽明天皇) reign in the sixth century by a monk named Keiin (慶胤) on Setoo Hill (背門丘), between Mount Takachiho (高千穂峰) and Hinotokomine (火常峰), and was later moved to its current location.

From 1:36 in the video, you can take a look at the many buildings of Kirishima Shrine, including the main shrine building, which has been designated an Important Cultural Property.
The shrine building, which enshrines six deities, is not to be missed!
The shrine is covered inside and out in a luxurious vermillion lacquer coating and is often referred to as the "Nikko of the West" or "Nishi no Nikko" (西の日光) in Japanese.

Highlights of Kirishima Shrine include the sacred cedar tree, the wall painting "Nijushikozu" (二十四考図), the dragon pillars of the hall of offerings, and the giant torii gates.
The famous "Sazare Stone" (さざれ石), which is mentioned in Japan's National Anthem "Kimigayo," the poem "Shinseikourinnohi" (神聖降臨の碑), which is engraved into a stone monument, and the sacred tree "Ogatamanoki" (招霊木), are another three spots you don't want to miss out on!

If you climb the 80-step stone staircase from the vermillion-colored bridge to the observation deck, you can catch a stunning view of Kagoshima Bay (鹿児島湾), Sakurajima (桜島), Kagoshima City (鹿児島市) and Mt. Kaimon (開門岳).
It's a great spot to take pictures to share with your friends on Instagram!

Other Reasons To Visit Kirishima Shrine

It has now been more than 300 years since Kirishima Shrine was rebuilt by order of Yoshitaka Shimazu (島津吉貴公).
Many people visit Kirishima Shrine these days seeking good luck, family happiness, prosperity of descendants, and success in their careers.

Kirishima Shrine is also believed to be a power spot and worshipped as the god of good luck and separation.
There are people who claim to have experienced strange phenomena here and there are even mysterious legends surrounding the area called "The Seven Wonders of Kirishima" (霧島七不思議伝説) in Japanese.
At the shrine, you can receive a special seal stamp called a "shuin" as well as purchase items like good luck charms, known as "o-mamori," as well as spiritual crystals and bracelets.

Kirishima Shrine is a sacred shrine in Kagoshima prefecture nestled in nature and is gaining popularity year after year as a spiritual power spot in Japan.
As you can see from 2:16 and 5:19 in the video, Kirishima Shrine is also a famous spot to enjoy the beautiful autumn foilage.

There are many hot springs, hotels, and restaurants in the area surrounding Kirishima Shrine where you can enjoy lunch or simply relax after a day of sightseeing.
If you have some time to spare, consider visiting some of the other popular tourist spots in the area, such as the Kirishima Open Air Museum (鹿児島県霧島アートの森), Maruo Falls (丸尾滝), or Kirishima Plateau's Mahorobanosato (霧島高原まほろばの里).