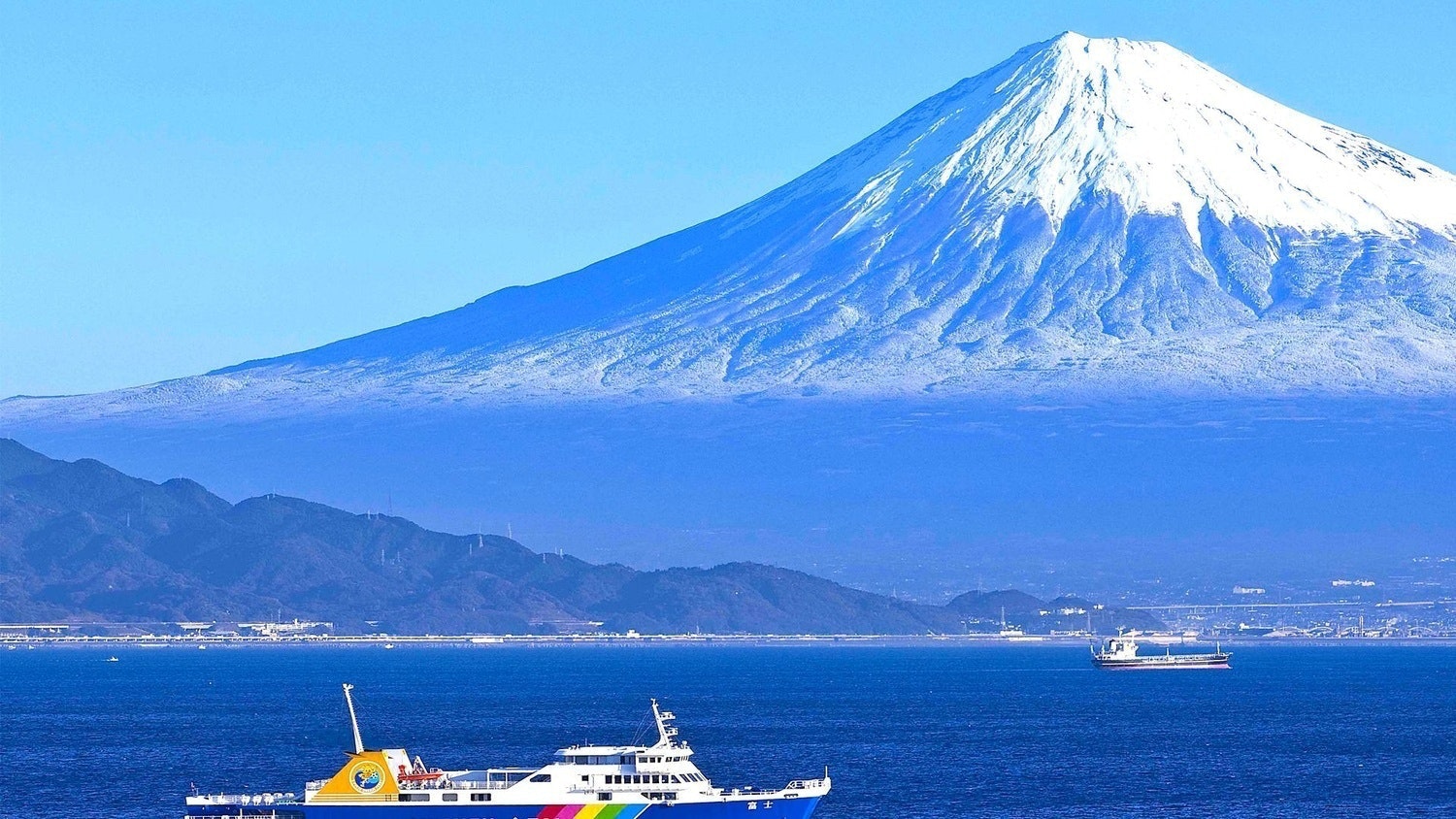 Fuji - Japan's Largest Tourist Attraction and the Pride of the Country. Its Mysterious Beauty Fascinates All Who See It

The Graceful Sight of the World-Famous Mount Fuji Can Be Enjoyed From All Over Japan. This Article Will Help You Find a Spot to View Mt. Fuji That’s Just Right for You!

The Mt. Fuji World Heritage Centre Is a New-Age Museum That Fuses Digital and Analog! The Museum, Located in Fujikawaguchiko, Yamanashi, Is Full of Facilities That Convey the Beauty of the World Heritage Site Mt. Fuji!

The View of 1,000 Cherry Trees in Full Bloom at the Foot of Mt. Fuji Is Incredible! The Beauty of the Pink Tunnel of Cherry Blossom in Oyama, Shizuoka Will Blow You Away!

Go Sightseeing at Lake Yamanaka, Nestled at the Foot of the Sacred Mt. Fuji! The Yamanakako Area, Surrounded by Nature, Is One of the Top Sightseeing Destinations in Japan!

Oshino Hakkai - Breathtaking Scenery at the Foot of Mt. Fuji!

Kitaguchi Hongu Fuji Sengen Shrine - Learn About One of Japan's Most Famous Power Spots, Located in Yamanashi Prefecture, Where the Sacred Mt. Fuji, Resides, and Information About Popular Amulets and Shuin Stamps for Tourists!

Kamiike Pond Is a Mysterious Pond Surrounded by the Sea, Yet Filled With Freshwater Carp. Enjoy the Beauty of This Tourist Destination in Shizuoka, One of the Seven Wonders of Izu, Whose Mysteries Have Yet to Be Solved!

Mt. Fuji is the tallest mountain in Japan, boasting an elevation of 3,776 meters.
It is a huge mountain that spans from Fujinomiya, Susono, Fuji City, Gotemba, and Oyama in Shizuoka Prefecture, to Fujiyoshida and Narusawa in Minamitsuru District in Yamanashi Prefecture, and the surface of the mountain extends to the coast of Suruga Bay.
Mt. Fuji, with its gracefully sloping peak, is a freestanding mountain that is easily recognizable even from afar.
As a sacred mountain that symbolizes Japan, Mt. Fuji is widely loved not only by the Japanese, but also by those outside of Japan.
Mt. Fuji has been selected as one of Japan's Three Holy Mountains, Japan's Top 100 Famous Mountains, and is one of Japan's Top 100 Geological Features.
Mt. Fuji was registered as a special place of scenic beauty in 1952, as a historical site in 2011, and as a world cultural heritage in 2013, along with related cultural assets.

The oldest record of Mt. Fuji is its description in Hitachi no Kuni Fudoki (常陸国風土記), where it is spelled "福慈岳" as opposed to the common spelling "富士山."
In older texts, Mt. Fuji is sometimes written "不二山" or "不尽山" as well.
It is believed that these names are what led to the spelling used today (富士山).
Today in Japan, there are many places at the foot of Mt. Fuji that use the same "fuji" prefix. These include Fuji City, Fujinomiya, Fujiyoshida, and Fujikawaguchiko.
Places where you can see Mt. Fuji from are sometimes called "Fuji-mi" (富士見). "Mi" (見) means "see" in Japanese.

Mt. Fuji has been regarded as a sacred place for mountain worship since ancient times.
In particular, Asama Shrine, which is dedicated to the gods Asama-Okami and Konohana-Sakuyahime, has been a sacred place for the Asama faith since ancient times, and there are many subordinate shrines and branch shrines throughout Japan. There is also a faith in Fuji called Fuji Shugendo, which was established by a priest of Fuji.

Mt. Fuji is known as an active volcano, and around 300 years ago, there was a major eruption called the Hoei Eruption of Mt. Fuji.
Although there has been no volcanic activity for a while, there is a possibility that an eruption will occur again in the future, so all possible disaster prevention measures have been taken.
Fuji has erupted many times in its long history, each time causing major damage to the surrounding area.
Fuji has long been revered and worshipped as a mountain where the gods live.

After the opening of the mountain on July 1st, Mt. Fuji is crowded with many climbers during the climbing season.
The history of climbing Mt. Fuji dates back quite far, and it is said that Prince Shotoku rode a horse to the top of the mountain in the Asuka Period.
Records show that many people had already climbed Mt. Fuji by the Heian period as well.
Even during the Kamakura period, there were many climbers who climbed the mountain for training purposes.
Mt. Fuji was once considered to be a mountain that women were forbidden to climb, but during the Edo period (1603-1868), women began to climb Mt. Fuji as well.

At present, there are several hiking routes for sightseeing on Mt. Fuji. These include the Fujinomiya Trail Head, Subashiri Trail Head, Gotemba Trail Head, and the Yoshida Trail Head.
Most climbers take the Yoshida Route, which has good traffic access and is very convenient.
The end of the motorway is called the fifth station, and after that, you will need to walk up the trail with your equipment prepared.
For safety reasons, the rules for climbing Mt. Fuji require climbers to dress appropriately, wear climbing or trekking shoes, carry rain gear and warm clothes, and a light.
In order to prevent accidents, such as slips and falls, it's important to check the weather in advance and remember to climb with good manners.
Mt. Fuji is equipped with live cameras, so it's recommended that you check the weather before you visit.
In addition, Mt. Fuji also has a parasitic volcano called Mt. Hoei, which also has a mountain climbing course.

The World Heritage Site Mt. Fuji: An Object of Faith and Source of Art

We encourage you to visit these scenic spots when you visit Mt. Fuji.

Mt. Fuji is a fascinating mountain with many different faces depending on the location, time of day, angle, and season.
Mt. Fuji can be seen in the following forms.

Aka Fuji (赤富士): Mt. Fuji dyed red by the morning sunrise.
Beni Fuji (紅富士): A snow covered Fuji dyed by the sunrise or sunset.
Sakasa Fuji (逆さ富士): A view of Mt. Fuji reflected on the water's surface at Lake Motosu and other lakes.
Diamon Fuji (ダイヤモンド富士): This is a phenomenon in which the sun shines like a diamond on top of Mt. Fuji.
Kage Fuji (影富士): This is when the shadow of Mt. Fuji is reflected in the sea of clouds surrounding the mountain.
Kasagumo Fuji (笠雲富士): This is when the clouds above Mt. Fuji rest on it's peak in the shape of a rice hat.

Days on which you can see these views are few and far between, so if you get the chance, be sure to savor the moment. Don't forget to take a picture as well!
In Japan, there's also the tradition "goraiko" (ご来光) which is the viewing of the sunrise from atop a tall mountain. This is often paired with "hatsuhinode" (初日の出), the first sunrise of the year, at the top of Mt. Fuji.
Sightseeing flights are also operated from Haneda Airport to view the sunrise.
Mt. Fuji can be seen from not only Shizuoka and Yamanashi prefectures, but also from 20 prefectures in the Kanto and Kansai regions. The furthest point of view is from the town of Nachikatsuura in Wakayama Prefecture.
According to the Japan Map Center, the northernmost point at which you can view Mt. Fuji is Mt. Hanatsuka in Fukushima Prefecture.

Paintings and Works of Art That Feature Mt. Fuji

Fuji has a long history of being used as a motif by painters.
One of the most famous is Katsushika Hokusai's "Thirty-six Views of Mount Fuji."
In this work, Mt. Fuji is depicted from various points of view along with the lively sea and other landscapes.
There's also, Utagawa Hiroshige's "Thirty-six Views of Mount Fuji," which has a splendid painting of Mount Fuji.
Other paintings with Mt. Fuji as a motif include "A Distant View of Suruga Bay and Mt. Fuji" (駿河湾富士遠望図) by Shiba Kokan, "E-tekagami" (絵手鑑) by Sakai Hoitsu, and "Heaven and Earth Shine" (乾坤輝く) by Yokoyama Taikan.
Mt. Fuji is a motif that has been painted by not just Japanese artists, but by many western artists as well.
Mt. Fuji has also been used in the classics "Taketori Monogatari" (The Tale of the Bamboo-Cutter), "The Tale of Genji," and "Ise Monogatari" (The Tales of Ise), and in modern times, it has been incorporated into the literary works of Natsume Soseki and Osamu Dazai.

Mt. Fuji, which spans Shizuoka and Yamanashi prefectures, has many great sightseeing destinations around its base. Here are the rankings of the best places to visit around Mt. Fuji., as recommended by the popular travel information website, Gurutabi.

Among these, we highly recommend Fuji Five Lakes, which is located at the foot of Mt. Fuji.
The five lakes are Lake Motosu (本栖湖), Lake Shoji (精進湖), Saiko Lake (西湖), Lake Kawaguchiko (河口湖), and Lake Yamanakako (山中湖), and the surrounding area has been designated Fuji-Hakone Izu National Park.
At Fuji Five Lakes, you can have a special time enjoying activities such as canoeing and SUP while gazing at the magnificent view of Mt. Fuji.
The Mt. Fuji area also has an urban park called Mt. Fuji Children's World (富士山こどもの国) and a hot spring resort where you can relax and enjoy yourself as you please.
Around the five lakes, there are many trendy cafes and restaurants that serve hoto, Yamanashi's local cuisine, and on top of being delicious it's great for taking Instagram pictures!
In the Yamanashi area, we also recommend Yoshida udon, another local specialty.

Since the Shizuoka area is connected to Kanto and Kansai by Shinkansen, you can easily go sightseeing there.
Fuji Shizuoka Airport, with both domestic and international flights, is also located in Shizuoka, making it easy to access even from distant places.
Mt. Fuji is a popular sightseeing spot in Japan that everyone should see at least once.
Be sure to take a trip to the Mt. Fuji area to see the magnificent views created by Mother Nature!