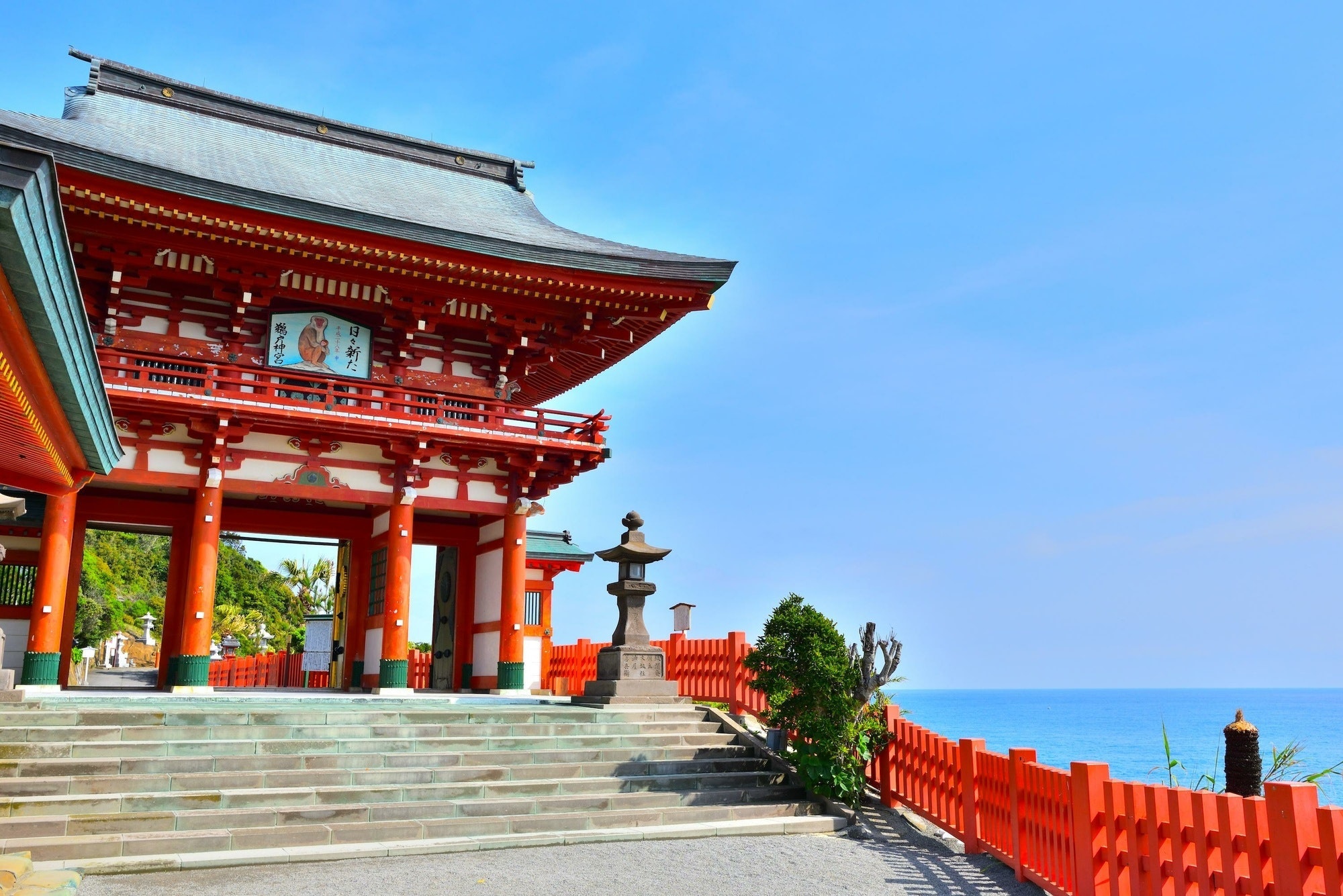 Udo Shrine is a shrine located in Nichinan, Miyazaki Prefecture, in Japan's Kyushu region and was previously classified as a Kanpei Taisha (imperial shrine); however, in the present it is designated as a Beppyo Jinja (a shrine designated and tracked by the Jinja Honcho (Association of Shinto Shrines).
As you can see from 7:04 in the video, the main shrine is enshrined in a rock cave (sea cave) on the cliffside facing the Hyuga-nada Sea (日向灘).

In order to worship at the shrine, you need to go down the stone steps along the cliff, making it a rather rare shrine, as most shrines require you to walk up to them.
In this article, we'll introduce Udo Shrine in Nichinan, Miyazaki Prefecture.

A Look at Udo Shrine in Nichinan, Miyazaki Prefecture? The History of the Shrine

Udo Shrine is famous as a sacred place for worshipping the sea, and the rock cave where Udo Shrine is enshrined is said to be the place where Princess Toyotama built a birth hut to deliver the deity, Ugayafukiaezu.

① Lucky Shimenawa (福注連縄) The shimenawa rope at the entrance of Udo Shrine is used to purify the body and remove any impurities.

② Petting Rabbit (撫でウサギ)
It is said that by petting the rabbit associated with Udo Shrine, wishes for recovery from illness, good luck, and success will come true.

③ Shuinchō
Seen at 10:48 in the video, this is the red stamp book that shows the characteristics of the shrine.
We recommend getting one along with an omikuji to commemorate your trip.

The main shrine of Udo Shrine is built in a natural cave.
Its charm lies also in the surrounding scenery.
The magnificent view of the natural scenery, such as the blue sky and the azure sea combined with the vivid, scarlet-painted shrine gate and tower gate is, in a word, splendid.

In addition, there's "Ochichi-Iwa," which looks like a woman's breast and is famous for praying for safe childbirth, and the so-called milk water dripping from it.
There's also a sacred stone shaped like a turtle with an indent on its back, and it's said that if you're a man you throw an "undama" (lucky ball) with your left hand and if you're a woman, you throw it with your right hand, and if you manage to throw it into the indent perfectly it's said to make your wishes come true.
There's also Haccho-zaka, an 800-meter long stone staircase that leads from the port of Fukigei to the gate of the shrine.
It's the oldest stone stairway approach to a shrine and has strange rocks such as "Futahashira-iwa" and "Mifune-iwa."

"Udo Senjojikikigan" on the south side of Udo, where Udo Shrine is enshrined, is another spot we highly recommend.
It is a stratum (Neogene Miyazaki Formation) that was deposited from 1,000 years ago to 1 million years ago and is characterized by the repeated accumulation of hard sandstone layers and soft mudstone layers.
Over the years, it has been exposed to the harsh waves and winds and rain of the Hyuga-nada Sea and has been eroded to its present appearance.

The wavy rocks created in this way are also known as the "Devil's Washing Rock" or "Devil's Washboard" and have been designated a cultural property by Miyazaki Prefecture.

The Values and Customs of Udo Shrine in Nichinan, Miyazaki Prefecture

Udo Shrine also has two legendary boulders called "Ochichi-Iwa" and "Hikikiri-Iwa" and are said to have aided Princess Toyotama when she was breastfeeding her children.
Both are places of worship for people who wish for safe childbirth and child rearing.

At Udo Shrine, there is an event called Shanshan-Uma, which is a tradition of Miyazaki that was held from the middle of the Edo Period (1603-1868 AD) to the end of the Meiji period.
On a steep and difficult road called Nanaura Nana Touge, the bride rides upon a horse with the groom taking the reins and heads for Udo Shrine.
This custom has disappeared, but it is held as a sightseeing event to reproduce what it may have looked like at the time.

In 2017, the Udozaki area became a nationally designated scenic spot called "Udo," and the locals refer to Udo Shrine as "Udo-san."
Aside from being a beautiful scenic spot, it is also a popular power spot and Instagrammable tourist destination.

Shanshan Umadou Chu-uta Taikai is a singing event in which visitors compete in singing a traditional Japanese folk song.
The event is held in March every year, so if you are thinking of sightseeing at Udo Shrine consider visiting during the event.