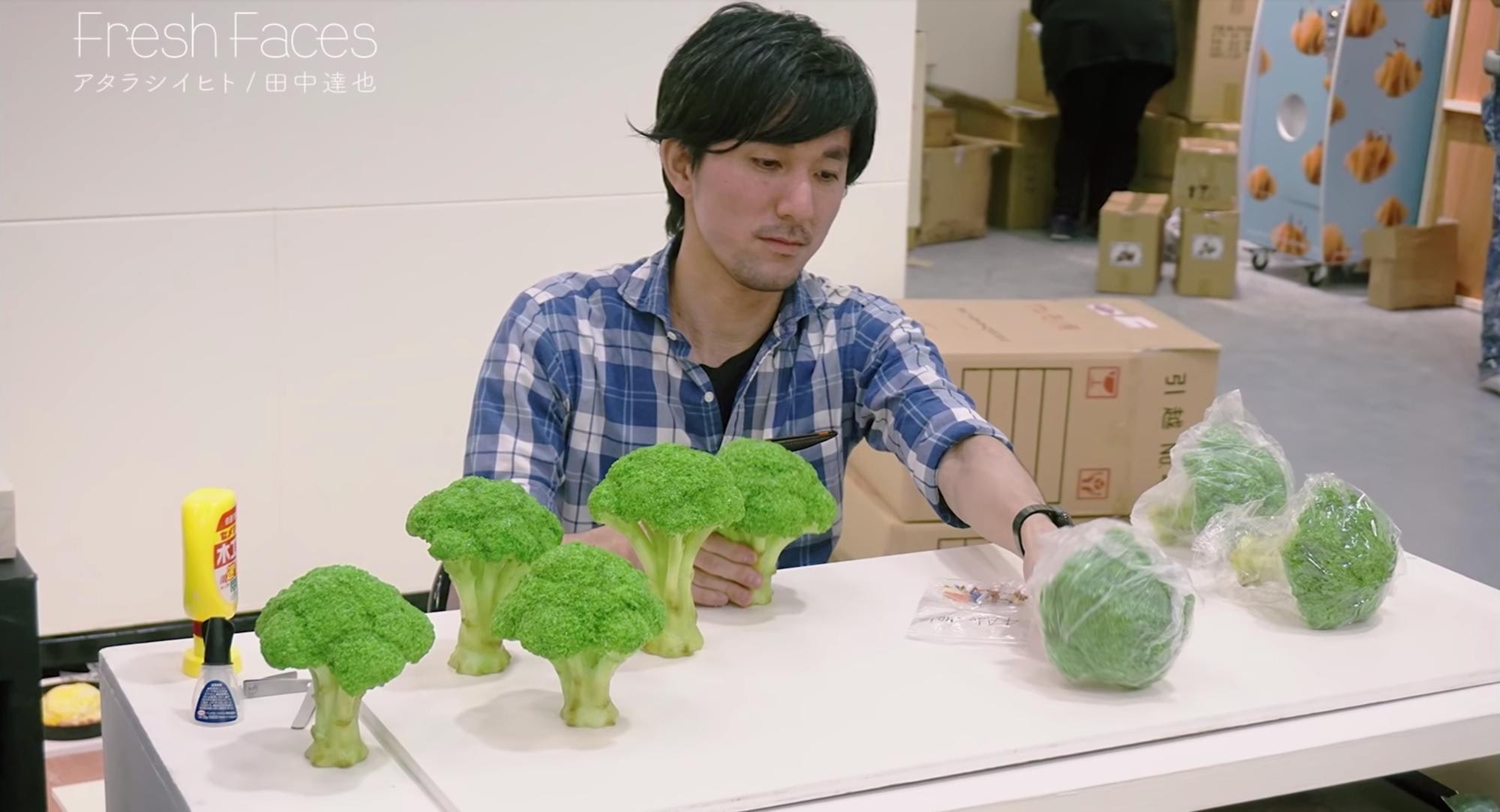 Tatsuya Tanaka likes to use every day objects, such as stationery and food, to create the illusion of a miniature world in his pictures.
For example, using onigiri (rice balls) as mountains, broccoli as trees (video 1:09), or lettuce as waves (video 1:16), he can create a small world for his miniature dolls.

Tatsuya Tanaka was born in 1981 in Kumamoto prefecture (熊本県, kumamotoken), but currently lives in Kagoshima prefecture (鹿児島県, kagoshimaken), working as a miniature art photographer and illusion artist.
In 2011, he started a calendar art project called "Miniature Calendar" composed of a variety of his photographs.
Since then, he has appeared on television in shows such as Jonetsu Tairiku, in magazines, and other media, and has gained fans from around the world.

Posting pictures of his art work on Instagram and other social networking sites has gained him a lot of attention and followers.
In 2017, around 830,000 people from around the world were accessing pictures of his work through SNS.
Tatsuya Tanaka's creative artwork has even been featured in the title sequence of the NHK morning television drama "Hiyokko."

Where Can You See Tatsuya Tanaka's Artwork?

You can see Tatsuya Tanaka's artwork, such as the popular "Kumowassan" (クモワッサン) (shown at 1:06 in the video), on his Instagram or other social networking sites, or by purchasing a book containing a collection of his photographs.

We also highly recommend attending his miniature art exhibition, "Tatsuya Tanaka Exhibition" (田中達也展, tanakatatsuyaten).
In 2017, the highly popular "Miniature Life" exhibition was held in Kyoto prefecture (京都府, kyoutofu), Hyogo prefecture (兵庫県, hyougoken), Miyazaki prefecture (宮崎県, miyazakiken), Nagoya city (名古屋市, nagoyashi), Kobe city (神戸市, koubeshi), Fukushima prefecture (福島県, fukushimaken), and many other places all over the country.
The "Miniature Life 2" exhibition was due to be held in 2020; however, due to the rapid spread of the Coronavirus, the exhibition was unfortunately cancelled.
Be sure to check online for information about future exhibits.

From 2:37 in the video, you can see how his most popular piece of artwork "Kumowassan" was created.
If watching this video has sparked your interest in the world of miniature art photography, consider purchasing some miniature 3D models and try to create your own miniature world!