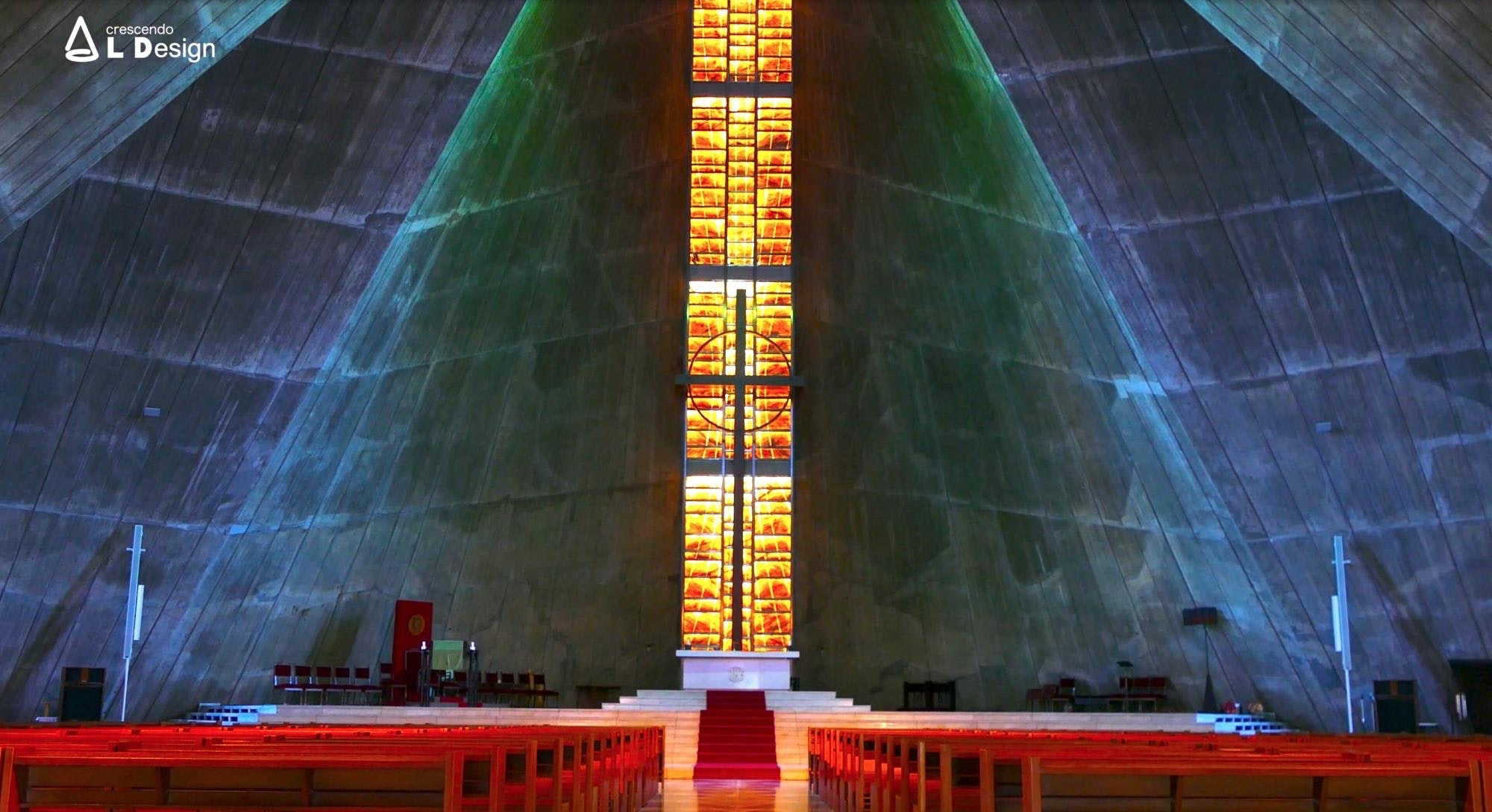 In the video we see an awesome aerial view of St. Mary's Cathedral Tokyo, which is normally on seen from ground level.
You'll be impressed by the beautiful reflection of the church in the evening and at night.

What is St. Mary’s Cathedral Tokyo?

St. Mary’s Cathedral Tokyo is a church located in the Bunkyo-ku area of Tokyo, a 15-minute walk from Edogawabashi Station on the Tokyo Metro Yurakucho Line, across from the Chinzan-sō” building.
It has the largest number of adherents in Japan in the Catholic Church's bishopric, which covers Tokyo and Chiba Prefecture.
It is also accessible by bus from Mejiro Station on the JR Yamanote Line.

It was originally built in a wooden Gothic style in 1899 as an auxiliary temple of "Maikai Juku" (玫瑰塾) but the building was destroyed by fire during the air raids of World War II in Tokyo.
The present building being constructed in 1963.

There is also a bust of St. Francis Xavier and a replica of Michelangelo's Pieta found in the Basilica of St. Peter in the Vatican.
Michelangelo's Pieta can be seen at 2:58 in the video.
English Masses and lectures by a priest are also held at St. Mary’s Cathedral Tokyo and you don't need to be a follower to attend.

Other events, such as a pipe organ concert, which can be seen at 3:16 in the video, are also held, and weddings and ceremonies can be held there as well.
You can also tour the facility during public hours.

St. Mary's Cathedral Tokyo is a very popular building designed by Kenzo Tange.
The building has a thin, curved, hyperbolic-parabolic shell structure, and the exterior walls are made of stainless steel.

As you can see from 4:30, when viewed from the sky it's shaped like a cross.
There are no pillars in the bare concrete interior, which gives it a solemn and sacred atmosphere.
The inside of the building is shown at 2:27 in the video.
The building was designed without the use of CG and 3D techniques, and was entirely hand drawn.

In 1978, singer Doji Morita (森田童子) performed live at the Cathedral and the CD "St. Mary's Cathedral Tokyo Recording" was released, allowing listeners to feel the atmosphere of the cathedral.

Enjoy the video showing St. Mary's Cathedral Tokyo glistening in the sunshine and its amazing structure in the nightscape of Tokyo.