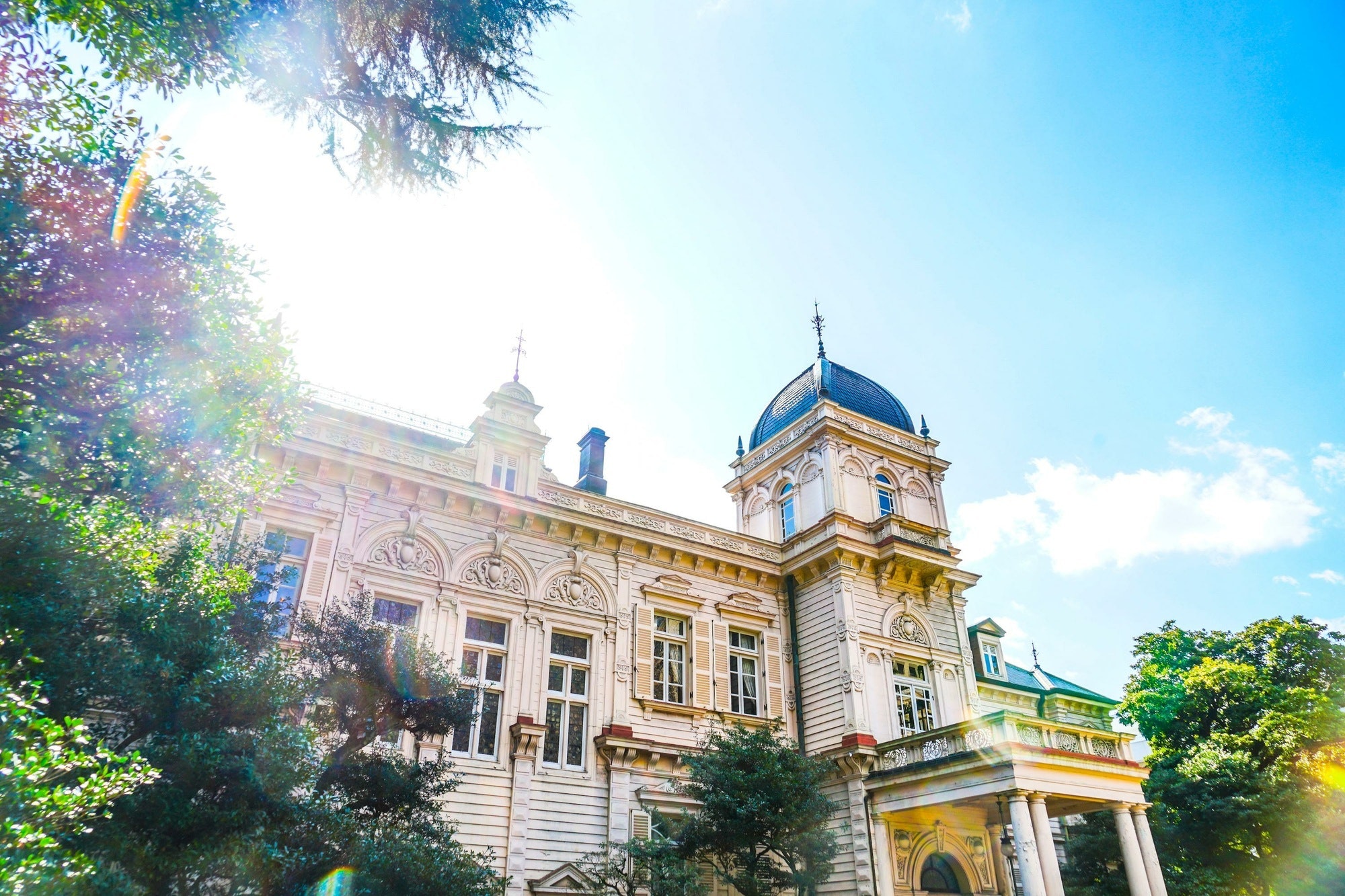 Due to the dissolution of the zaibatsu, as directed by SCAP after the war, the Iwasaki Family residence was requisitioned and they lost much of the buildings and garden; however it was later returned to the Japanese government. Presently, there are 3 buildings left, the Western-style building (main building), the billiard room, and the Japanese-style building. They are designated as important cultural properties.

The building itself was designed by the Englishman, Josiah Conder. An authentic, wooden, Western-style 2 story building with a basement was very rare at the time and it is said to have eventually had a large influence on modern day Japanese housing.

All of the Kyu-Iwasaki-tei Gardens is open to the public as a metropolitan garden, and there is also a café there so it's teeming with people during lunchtime or seasons in which you can see the cherry blossoms and autumn foliage.
The elegant Western-style building is also used for filming many TV dramas and movies thanks to its beautiful appearance.

The Highlights of Kyu-Iwasaki-tei Gardens

There are so many points of interest at Kyu-Iwasaki-tei Gardens that we couldn't possibly cover them in one go.
The architecture of the semi-Western mansion representing the wealthy of the Meiji era (1868-1912) immediately after the opening of the country, is considered to be a very modern style even by present-day standards. When you enter the house, the decorations, including vines wrapping around the wooden columns, catch one's eyes immediately. This particular design is called Jacobian-style architecture and was very popular in 19th century England.
This can be seen from 1:10 in the video.

On the other hand, the serene Japanese-style garden has the look of a traditional Japanese garden, with garden stones, lanterns, and artificial miniature hills. At tea ceremonies, you can enjoy tea and Japanese confectioneries while enjoying the scenic nature of the seasons at the beautiful Kyu-Iwasaki-tei Gardens.

The Tumultuous History of Kyu-Iwasaki-tei Gardens

Kyu-Iwasaki-tei Gardens is located at Ikenohata 1-chome, Taito-ku, Tokyo, where the residence of the Takada Domain was located in the Edo period (1603-1868).
After the Meiji Restoration, due to the abolition of feudal domains and the establishment of prefectures in 1871, the Takada Domain was dissolved and it became the property of the former Maizuru clan governor, Sukeshige Makino. However, it was bought by Yataro Iwasaki who was part of a zaibatsu, and the 3rd generation head of that family, Hisaya Iwasaki, built Kyu-Iwasaki-tei.

After the war, the zaibatsu were dissolved by SCAP, the building became government controlled, and was managed by the Tokyo Metropolitan Government. It is indeed a monument that has survived a tumultuous history to the present day.