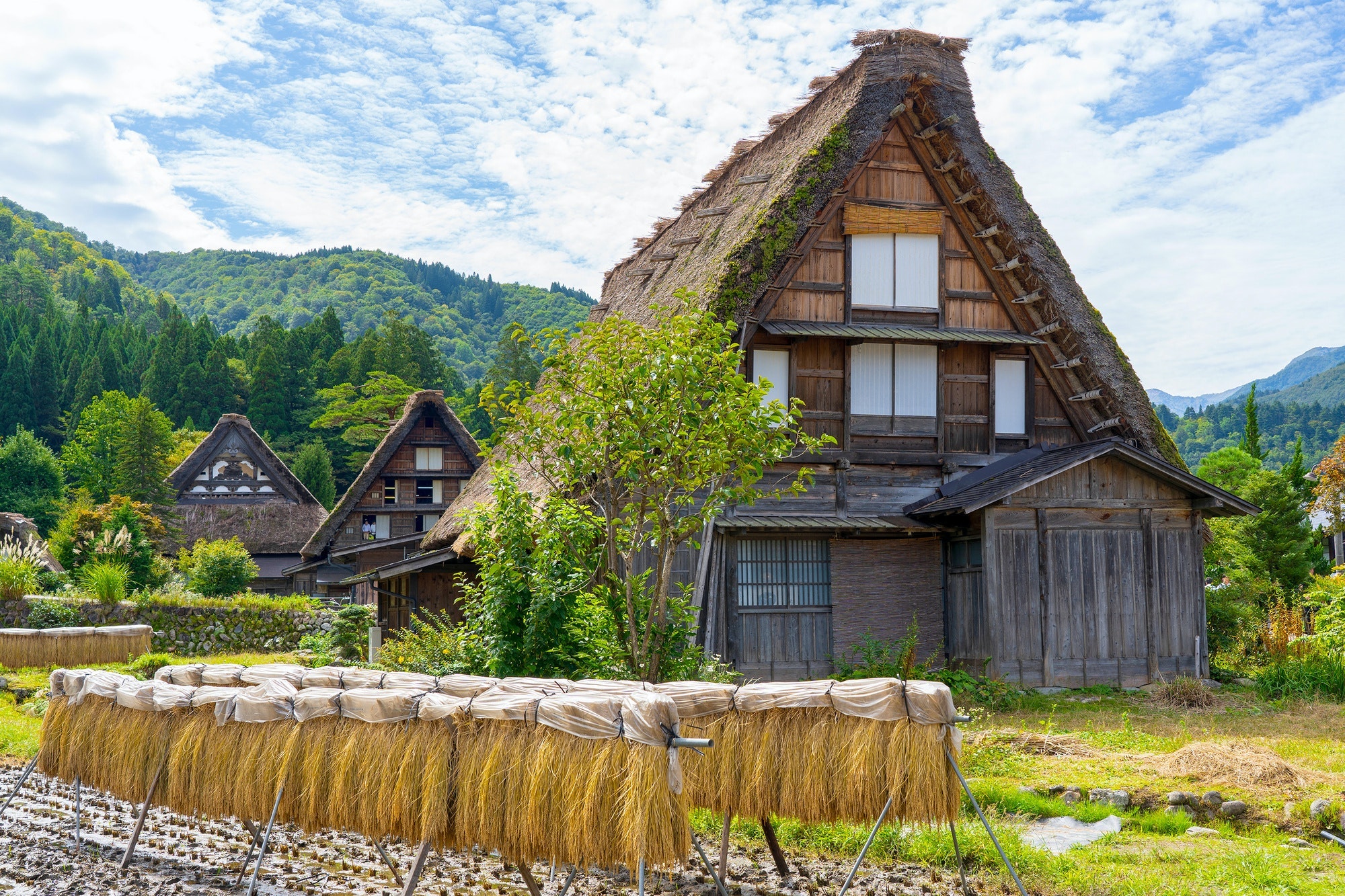 The Skilled Thatchers of Shirakawa-go?

The young thatcher was born and raised in Shirakawa-go, Gifu, in the Tokai region (東海地方) of Japan.
Shirakawa-go, a registered World Heritage Site, is situated in an area that experiences heavy snowfall each year.
The characteristic Gassho-zukuri-style houses are built to withstand the harsh weather conditions, however, constructing the thatched roofing is not only hard physically but also requires a vast amount of knowledge and skill.

More About Shirakawa-go, a World Heritage Site in Gifu Prefecture

The unspoiled landscape of the Japanese villages Shirakawa-go in Gifu prefecture and Gokayama (五箇山) in Toyama prefecture (富山県, toyamaken) is hard to find anywhere else in Japan.
Both of these historic villages were registered as UNESCO World Heritage Sites in 1995.

As mentioned previously, Shirakawa-go is located in Gifu prefecture.
This area receives some of the heaviest snowfall in Japan and around 100 gassho-zukuri houses of varying sizes have been built in this remote area of the country.
You can see the snow-covered gassho-zukuri houses from 1:47 in the video.
Gasshozukuri Minkaen (合掌造り民家園), an open-air museum located in Ogimachi (荻町) lies along the Sho river (庄川, shougawa) and was registered as an Important Cultural Asset in 1976.

Shirakawa-go used to be rarely visited by outsiders, especially during the winter months, however, as the beauty of the landscape became well known through the media and internet, the number of tourists dramatically increased and Shirakawa-go is now one of the top sightseeing spots in Japan.
The village is often lit up at night and the snow-covered gassho-zukuri houses look like something out of a fairytale.

More About the Thatchers of Shirakawa-go

The sericulture (silk farming) industry was very important to the Shirakawa-go region.
You can see the attics where the silk worms were kept from 1:48 in the video.

The typical shape of the thatched roofs is called "Kirizuma" (切妻) and the main materials used to make the roofs are Chinese silver grass (ススキ, Miscanthus sinensis) and Kariyasu (刈安, Miscanthus tinctorius), both of which are water-resistant and breathable.
The roofs are generally replaced every 30-40 years, with small repairs being made along the way.
The layout of the houses within the village and even the angle of the roofs have all been carefully designed taking into consideration the fact that they must be able to withstand the strong winds and heavy snowfall of that region.

The smoke which rises from the sunken fireplace (irori, 囲炉裏) helps to prevent pests and degradation of the roof and improves the overall durability.
The thatchers use techniques like these to ensure the roofs are strong enough to withstand the rain and wind.

Reroofing the Houses of Shirakawa-go

Photo：Re-thatching by a thatching craftsman

Gassho-zukuri houses have been built in Japan since the Edo period (1603 AD-1868 AD).
Built without the use of nails, the houses are split into two areas: the first floor living space and the attic space used for silk-farming.
Windows can be built into the roof and the spacious design of the Kirizumazukuri (切妻造り) roofs create the ideal conditions for silk farming during the harsh winter months.
The roofs are supported by pillars that are cut at a particular angle, lodged in place, and then tied securely.
No nails are used to hold the pillars in place.
In this way, the frame of the roof is strong yet flexible enough to withstand earthquakes.
The above are all great examples of the high level of skill involved in Japanese engineering and construction.

The design and functionality of the thatched roofing is one of the highlights of the houses in Shirakawa-go.
The roofs are highly durable, however, being made from natural materials, they do require reroofing every 30-40 years.
Reed screens called "sudare" are first laid down as a base, after which bundles of miscanthus reed, cut to around 80cm in length, are piled on making sure to leave no gaps.

The most difficult part of the reroofing process is perfecting the edge of the roof, as this affects not only the final look of the roof but also the durability.
Reroofing is a huge project which with the combined effort of the local thatchers takes on average 2 months to complete and costs approximately 20 million yen.
You can take a look at the reroofing process from 6:52 in the video.

Summary of the Thatchers of Shirakawa-go, a World Heritage Site in Gifu Prefecture

Shirakawa-go, a village nestled amongst the mountains of Gifu prefecture, is a popular sightseeing destination which attracts a large number of tourists year after year.
Other popular tourist spots and events in the Shirakawa-go area include Hirase Onsen (平瀬温泉, hiraseonsen), the autumn foliage of the area, Myozenji Temple (明善寺) where you can collect Goshuin (御朱印) and see the Doboroku Festival (どぼろく祭, doborokumatsuri) as well as the lion dance called "Shishimai" (獅子舞) in Japanese.

You can also take a look at Shirakawa-go online on the Shirakawa village office website, which incldues live camera footage taken from the observation deck.