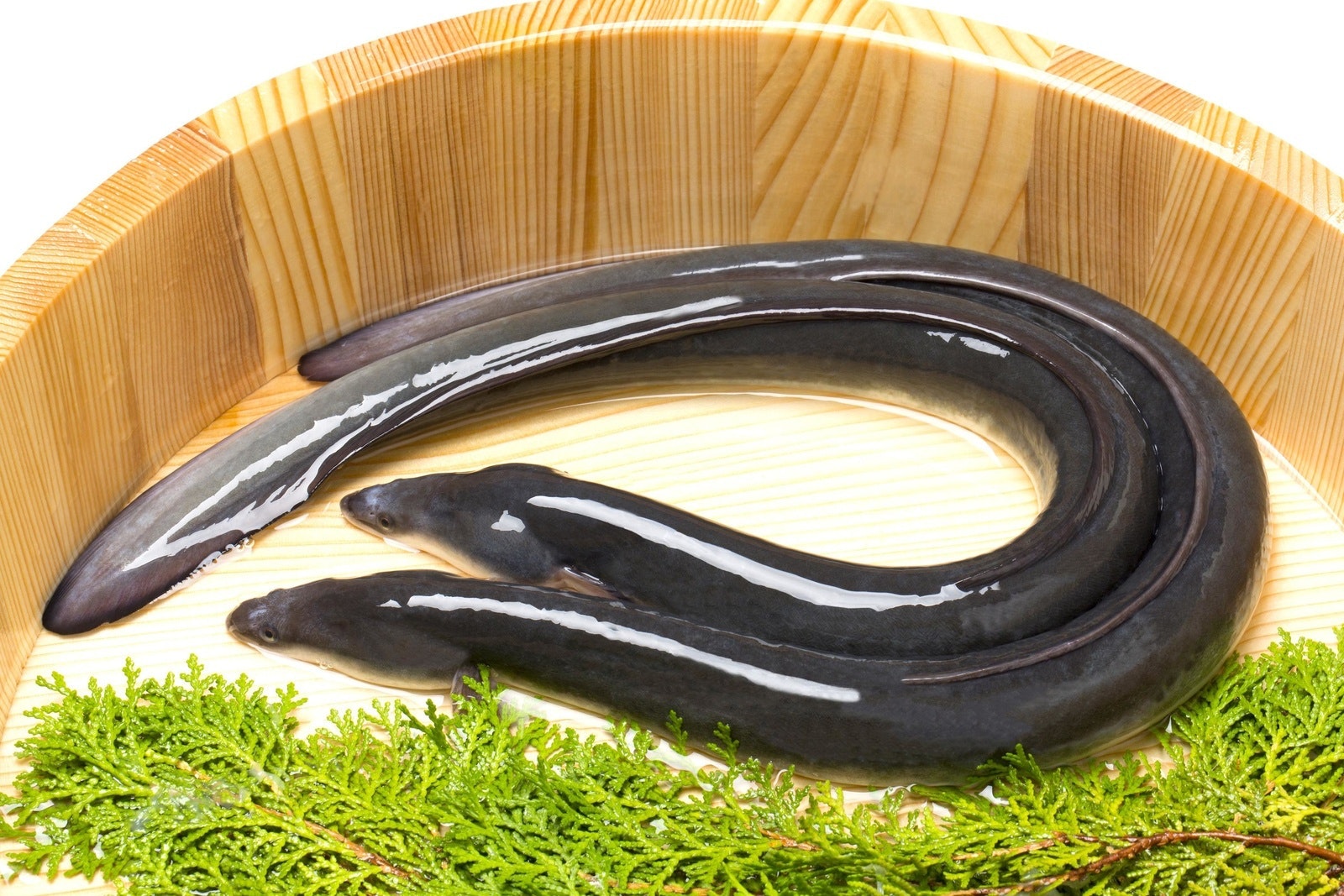 An Impressive Video of Chefs Preparing Eel at the Famous Restaurant Kawatoyo in Narita, Chiba. Take a Look at the Flashy Skills Catching the Eyes of Passersby!

The Splendid Skills of the Artisans of the 200-Year-Old Eel Shop "Nodaiwa" in Minato, Tokyo! Explore the Secrets of a Popular Japanese Dish That Has Long Delighted the Japanese Palate

Rare Footage of How "Kinshi-don," a Popular Menu Item at Kyoto's Long-Established Eel Restaurant "Kyogoku Kaneyo," Is Made

Eat Freshly Cut and Freshly Cooked Unaju! A Look at the Delicious Unaju of Unazen, Near Tokyo Sky Tree in Azumabashi, Tokyo!

Editing Supervised by Hattori Nutrition College! Check Out How to Prepare and Cook Eel in This Video!

Unaju/unadon are Japanese dishes that consist of a bowl of rice topped with kabayaki eel and a generous amount of soy-based sauce. It originated in Japan and was popular as a local cuisine of Edo Tokyo.

The combination of eel, which is delicious on its own, topped with a thick sauce made mainly of soy and mirin, is truly exquisite, and it can be eaten on anniversaries, ordered at restaurants, delivered, and even made at home.

If you add condiments, such as powdered sansho (Japanese pepper), nara-zuke (traditional Japanese pickles), or kimosui (eel soup), you can enjoy it even more, and it's one of the dishes that Japan is proud to present to the world.

The history of unaju and unadon goes back as far as the Bunka period (1804-1818) and is considered to be one of the oldest of all rice beds.

There are many theories on the origin of unaju and unadon, but the most widely believed theory is that Okubo Imasuke, the sponsor of Nakamura-za, a theater in Tokyo's Ningyocho district, sandwiched kabayaki between beds of rice and delivered them to the theater to prevent the kabayaki from getting cold.

It is also said that in 1857, undaon was already being sold at "Uranagaya" in the neighboring town of Sakai.

Nowadays, the method for making kabayaki eel has been perfected, but there were a lot of innovations in the process.
In the Edo period, eel was grilled with sauce before simmering, but in the Meiji period, steaming technology was introduced to Japan and steaming techniques were established in the Taisho period.
Because sandwiching an eel between two beds of rice would have meant steaming it twice inadvertently, this style of unaju and unadon have disappeared in Tokyo, and the currently popular recipe of eel on top of beds of rice has become the most popular.

The Differences Between Unaju and Unadon

Unaju and unadon are often used interchangeably, but the cooking process actually differs slightly between the two.

Eel with rice was simply called "donburi" (丼, rice bowl) in the Edo period (1603-1867) as an abbreviation of "unagi-donburi" (鰻丼, eel rice bowl), and in the Meiji period (1868-1912) it was called "unagi-donburi," from which it was then abbreviated as "unadon."
Generally, eel sold at relatively affordable prices at chain restaurants such as Sukiya, is often called "unadon" because it's served over a bowl of rice.

The term "unaju" is used to refer to eel rice when using multi-tiered boxes called "jubako" (重箱).
As you can see, unaju and unadon are used depending on how the dish is served, but it is said that the name is not the only determiner.
If you look at the menus of various restaurants serving eel, you'll see that unaju is more expensive than unadon.
Why is there a difference in price between unaju and unadon? There are many theories on this, but here are a few.

1. The Quality and Quantity of Eel Is Different
Unadon is all about the eel on the surface, but in the case of unaju, where eel is often sandwiched between two beds of rice, the amount of eel may simply vary.
Furthermore, unadon is often prepared with mass consumption in mind and made with eels purchased from farms, unaju is often prepared with wild eel, hence the higher price.
There are ranks such as "superior" (上) and "extra special" (特上) when ordering unaju or unadon, but this only differs in terms of the quantity of eel, not in terms of quality.
Since eel is typically sourced from a single supplier, if eel from a different region is used, this will always be clearly stated.
In some restaurants, unaju is not only larger in quantity than unadon, but also has an aspect of a being a higher-level menu item that comes with a combination of items, such as eel soup and other small dishes.

2. Different Parts of the Eel
The amount of each part of an eel is always the same, and the widest and thickest part of an eel is considered to be the most delicious.
The difference in price comes from the fact that unaju prioritizes the use of said section, while other parts of the body are used more often in unadon. 3. Differences in the Origin of Unaju and Unadon Generally speaking, eel rice in a bowl is called "unadon," while eel rice in a Jubako box is called "unaju," but in reality, "unaju" also has other meanings as well.
Unaju also means "eel stacked on top of eel," and in some areas and stores, the term "unaju" is used to describe a bowl of rice with eel on top and eel on the bottom.
There are various theories about unaju and unadon, but the nuance is generally the same from region to region, so you should have no problem if you just remember unaju as a slightly more luxurious dish than unadon.

Names Besides Unaju and Unadon

Unaju and unadon is called "mamushi" (真蒸す) in the Kansai region.
There are various theories as to the origin of the word "mamushi," such as one that says it was a mispronunciation of the word "manmeshi," which is the same as "unagi-meshi" (eel rice) just in a different dialect, or other theories that say it derived from wordplay.

Eel rice that is served in a rice bin instead of a donburi bowl or jubako is called "Hitsumamushi" in the Kansai region, and "Hitsumabushi" in the Chukyo region.
Generally speaking, it has no relation to the "mamushi," a type of pit viper, but there is a theory that it may have originated from the snake.

Eel rice is also a standard ekiben (station bento), and is sold as a specialty at Hamamatsu Station near Lake Hamana in Shizuoka Prefecture, one of the major production areas of eel rice.
It is sold in a small box which is neither a bowl nor a jubako, so it is called "unagi-meshi" or "eel bento."

About Fukagawa-don and Yanagawa Nabe, the Local Cuisine of Tokyo

While eel is used in Unaju and Unadon, Fukagawa-don (aka Fukagawa-meshi), a local cuisine of Tokyo, is made using shellfish, such as various clams, and Yanagawa-nabe (hot pot) is made with loach.

1. Fukagawa-don (深川丼)
This is an attractive local cuisine of Tokyo, with a robust flavor due to the shellfish and the rich broth.
Various clams are the main shellfish used in this dish, and it is completed by pouring the broth, which is cooked with vegetables including green onions, etc., over rice, or cooking it with rice.
When Manila clams (アサリ, asari) are used, it's also called asari-meshi and has become a very popular ekiben.
The recipe is very simple, and the fact that you can make it at home is one of the reasons why it's so popular.

2. Yanagawa Nabe (柳川鍋)
Yanagawa nabe is another local dish of Tokyo, and is made by boiling boiled loaches and burdock with mirin (rice wine) and soy sauce and finishing it off with whisked eggs.
Because the smell of the loaches is eliminated, it's famous for being easier to eat than most people originally expect. In some cases, green onions and mitsuba (Japanese parsley) are added to further enhance the flavor.

There are various restaurants serving eel in Japan, and here we'll introduce the 3 most famous shops according to the popular gourmet website, Tabelog.

1. Shun (瞬)
In first place is the high-class restaurant "Shun."
Originally located in the city center, the restaurant was relocated to Arinaga, Shizuoka City, Shizuoka Prefecture, surrounded by mountains, due to the owner's preferences, and it is still highly popular.
There are two courses on the menu, an omakase course where you let the chef choose what he thinks you'll like, and a seasonal course, both of which are priced in the 20,000 yen range, but it's more than worth it.

2. Kabuto (かぶと)
Kabuto is located on the first floor of the Ikebukuro ES building in Ikebukuro, Tokyo.
The restaurant sources both wild and cultured eels, and although the courses vary slightly depending on the availability of eels on a given day, the flavors are simply superb, and it honestly doesn't matter if they are cultured or wild.
This is a restaurant where you can taste eel in all forms, not just kabayaki, and they also offer take-out.

3. Unagi Uomasa (うなぎ魚政)
Unagi Uomasa is an eel restaurant in Higashi Yotsugi, Tokyo, that is particular about its cooking method using Kishu-binchozumi (binchotan) charcoal, a high-quality white charcoal made from ubame oak.
Because the eels are carefully grilled using Kishu-binchozumi, the cooking time is at least 40 minutes, but the flavor is worth the wait.
The bento lunchboxes are lavishly made with domestic eel and are priced very affordably.

Unaju and unadon are a favorite in Japan on hot summer days.
If you learn more about the cooking methods and history of these dishes, you'll be able to enjoy them even more, and start making them on your own as well!