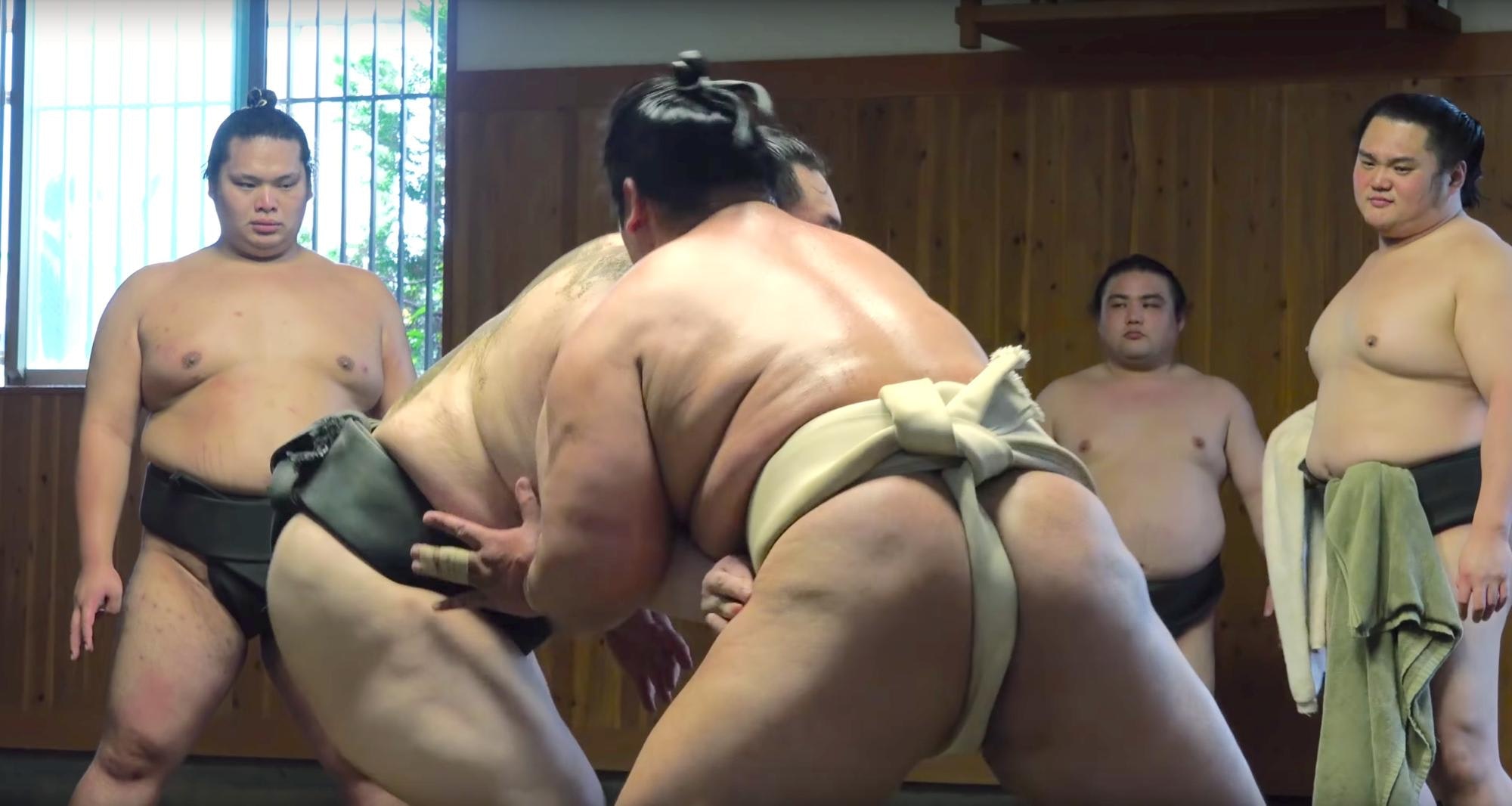 Enjoy the Exquisite Chanko Nabe Dishes at Kotogaume, a Restaurant in Sumida Ward Run by a Former Sumo Wrestler! What's the Secret Behind Chanko Nabe That Gives Sumo Wrestlers Their Big Bodies?

Sumo wrestling is a traditional Japanese sport that is loved by many fans.
In fact, sumo's origins are said to date back all the way back to the age of mythology.
What is the appeal of sumo, a sport which has been practiced in Japan for at least 1,500 years?

Humans have a fighting instinct, and for this reason, there have been many cases of competitions of strength and wrestling since ancient times.
This is the origin of the ancient martial art, sumo.
Sumo wrestling is also described in the Kojiki (A Record of Ancient Matters) and the Nihonshoki (Chronicles of Japan) as anecdotes of strength competitions and as a spectator sport for emperors.
In 23 B.C., Nomi Sukune and Togimano Kebaya practiced an ancient form of sumo called "sumai."
This "sumai" is said to have been the origin of the word "sumo."
In ancient documents, there are accounts of sumo wrestling as part of a festival to predict the year's harvest.
Sumo is also based on a ceremony called Yumitori-shiki, or "bow twirling," which has been practiced since ancient times.

During the Kamakura and Sengoku periods, sumo was widely practiced as martial arts training for warriors.
Oda Nobunaga was particularly fond of sumo and held sumo tournaments where sumo wrestlers from all over Japan competed against each other, and the winners were made his vassals.
Sumo became popular in the Edo period as a form of entertainment and spectacle for the common people.
It was during this period that sumo events were held and sumo performances began to spread throughout Japan.
From the mid-Edo period onwards, sumo was influenced by Shinto, and sumo wrestlers clapped when they entered the ring, and yokozuna began to wrap shimenawa around their necks.
The winner of sumo matches received congratulatory gifts and prize money, and strong wrestlers began to appear in the ring.
From the modern era, the rules of sumo were established, and the Japan Sumo Association was established in the Taisho period (1912-1926).

Many shrines and temples hold ritual sumo matches as part of their festivals.
In some areas, children as well as adults are invited to wrestle in dedication.
However, sumo traditionally forbids women to enter the sumo ring, and women are not allowed to enter.
That being said, there are some shows in various regions of Japan that showcase women's wrestling, known as "women's sumo."

Sumo wrestlers move up in rank as they win.
After training from a young age, a rikishi (力士, sumo wrestler) must first undergo an apprenticeship examination by the Japan Sumo Association.
If they pass this test, they are given the rank of "mae-zumo" (前相撲, lit. "before sumo"), but are not included in the rankings.
If their performance is good, they are given a higher rank on the banzuke (番付) list.

The banzuke ranking is only available to wrestlers in lower ranks.
Winning at the beginning of the rankings raises a wrestler's rank to jonidan (序二段), then to the sandanme (三段目), and finally to makushita (幕下).
Sekitori are ranked higher than makushita rikishi and make up the makuuchi (幕内) and juryo (十両) divisions; the first and second highest divisions, respectively.
The tournaments of juryo and higher rikishi are broadcast on sumo television.
If they continue winning, they are promoted to maegashira (前頭), the fifth highest rank of wrestlers and the bottom of the makuuchi ranks, then to komusubi (小結), the fourth-highest rank of sumo wrestlers, and the lowest san'yaku rank, then to sekiwake (関脇), the third highest rank, then to ozeki (大関), the second highest rank.
The strongest rikishi are awarded the rank of yokozuna (横綱), the highest rank attainable. At this point they are permitted to perform their own ring entering ceremony.

The title yokozuna derives from the magnificent rope they wear around their waist. Yokozuna is a lifetime title and once a rikishi has attained it it can never be lost.
The strongest yokozuna under the heavens is called "hinoshita kaizan" (日の下開山).
Yokozuna is the highest honor, and all wrestlers and fans of sumo aspire to be one.
Yokozuna requires dignity and manners, as well as the ability to wrestle in a manner befitting of the strongest rikishi.

Modern Japanese sumo is managed and administered by the Japan Sumo Association.
Sumo wrestlers belong to a sumo stable and train there on a daily basis.
The following is a list of Japan's main sumo stables:

There are many more stables in the sumo world.
There was also a Takanohana Stable, but it closed down and was absorbed into Chiganoura stable in 2018.
Each stable has many apprentices, including famous sumo wrestlers who are active in the sport.
Retired sumo wrestlers often become instructors, stable masters, or stable directors.

The Rules of Sumo and How Rikishi Fight

Sumo is a sport in which two wrestlers square off in the ring where only one will come out on top.
A wrestler loses if any part of their body, besides the soles of their feet, touch the ring, if the wrestler steps out of the ring, or if the wrestler commits an infraction.
The winner of a sumo match is decided by a referee called a "gyoji" (行司).

Nambu Sumo and other past versions of sumo used a square ring, but nowadays the ring is a circle with a diameter of 4.55 meters.
Before a bout, rikishi often squat and perform a pre-match ritual called "chirichozu" (塵手水).
This indicates that the wrestler is unarmed, and that he or she will fight fairly.
The wrestlers then enter the ring and prepare by placing their fists on the dividing line.
When the gyoji gives the signal, the two fighters collide. This is called "tachiai" (立会).

After this, the rikishi use offensive techniques such as thrusts at the throat, open hand strikes, foot sweeps, and more.
Other attacks are also effective, such as grabbing an opponent's mawashi (廻し, loincloth) and throwing him off balance or pushing him out of the ring.
Officially, there are several types of "kimarite" (決まり手, winning techniques) in sumo: throws, leg sweeps, backwards body drops, and twist down techniques.
There used to be forty-eight kimarite, but the Japan Sumo Association now specifies 82 techniques and five non-techniques, such as "isamiashi" (勇み足), where an opponent inadvertently steps too far forward and places a foot outside the ring.
In sumo, hitting with a fist, grabbing one's hair, striking a vital point, or grabbing one's throat are all forbidden.
If a wrestler does this, they are automatically disqualified.

When Is Sumo Held in Japan?

Sumo tournaments in Japan are currently held on odd-numbered months.
They are usually held according to the following schedule and broadcast on TV.

There are many sumo fans in each region who await the arrival of the sumo wrestlers in their respective regions.
Currently there are 15 consecutive days of sumo at each tournament.
The first day is called "shonichi" (初日), the eighth day is called "nakabi" (中日), and the last day, which is generally quite crowded, is called "senshuraku" (千秋楽).

Try a Game Similar to Sumo!

There are several forms of martial arts and sports in Japan and abroad that are very similar to sumo wrestling.
In Okinawa, a martial art called Okinawan sumo, differentiated by the characters "角力" (sumo) as opposed to the standard spelling "相撲," has been practiced for many years.
Other sports include Mongolia's Bokh, Shuai Jiao in China, Ssireum in Korea, Turkish oil wrestling, and Laamb in Senegal.
In Japan, there are also several games with rules similar to those of sumo wrestling.
Even children can play these games, so feel free to try them out!

Ude-zumo (腕相撲): Literally meaning "arm sumo" this refers to arm wrestling.
Yubi-zumo (指相撲): Yubi-zumo means "finger wrestling" and refers to thumb wrestling.
Ashi-zumo (足相撲): Ashi-zumo is leg wrestling where opponents sit across from each other, match legs at the knees, and try to force each others legs to the ground.
Kusa-zumo (草相撲): Kusa-zumo, or "grass sumo" is where you take two piece of grass, loop them together and pull. Whichever one breaks first loses.

How to Enjoy Traditional Japanese Sumo

If you're interested in sumo, we recommend going to a sumo match.
Sumo is also televised, so you can watch matches from the comfort of your own home.
You can also visit Ryogoku, which is famous as a sacred place for sumo.
In addition, there's the Edo-Tokyo Museum in Ryogoku, where you can learn about the history of sumo and life in the Edo period.

There are many restaurants in the area that serve chanko nabe, a staple of the sumo world, so you can taste some delicious sumo cuisine!
For information on sumo rankings, results, scores, and stars, visit the official website of the Japan Sumo Assiciation as well as their official Twitter page.