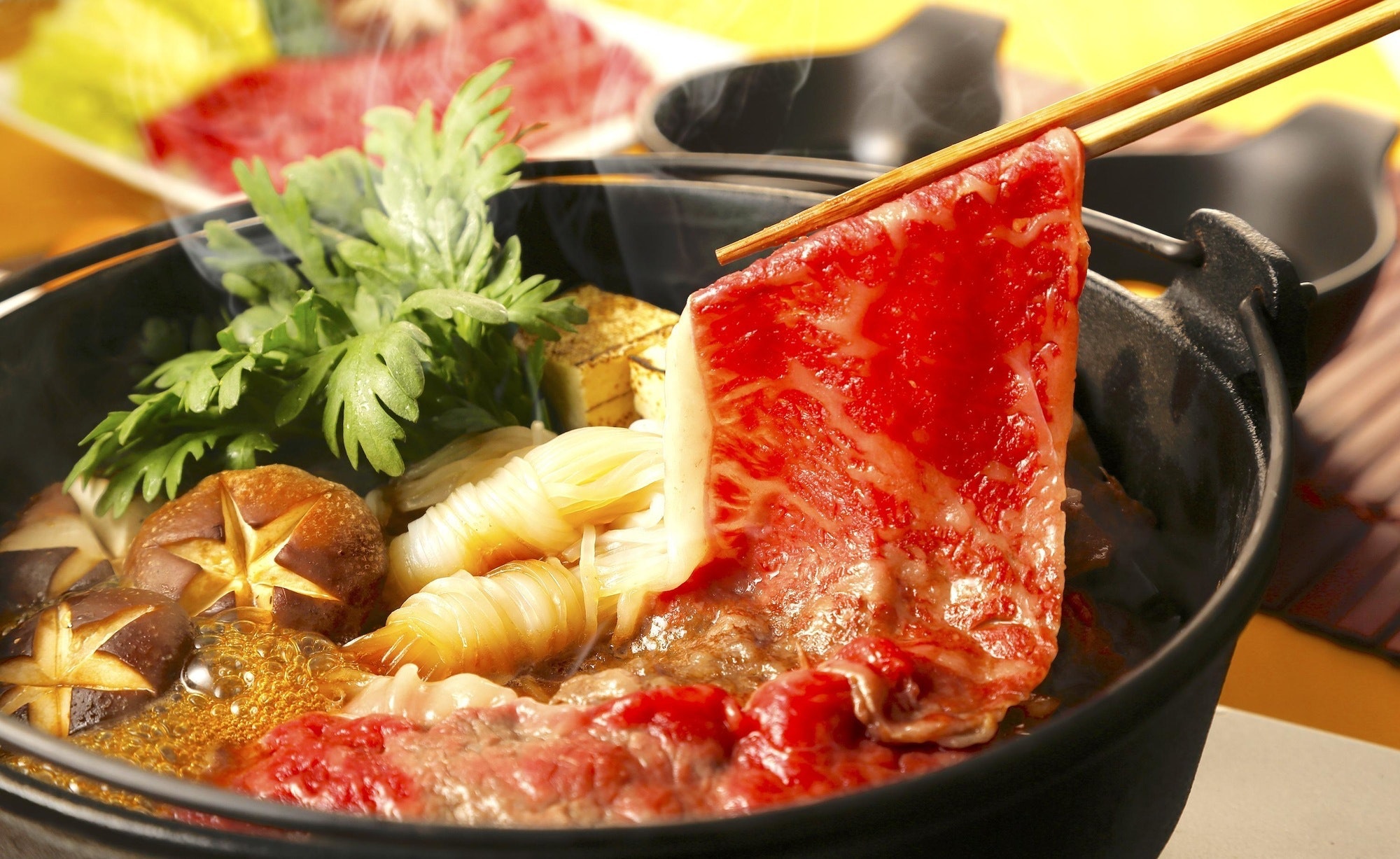 Sukiyaki - A Dish Highly Recommended by Food Connoisseurs Around the World! Ningyocho Imahan, a Popular Restaurant in Chuo City, Tokyo With 120 Years of History, Teaches You the Best Way to Enjoy It!

Ningyocho Imahan, a Japanese Restaurant Specializing in Sukiyaki and Shabu-Shabu! Enjoy the Finest Beef Selected by Connoisseurs in a Private Room! Everything From Appetizers to Desserts!

Sukiyaki is a traditional Japanese-style dish in which beef or other meat and other ingredients, such as vegetables, tofu and konnyaku (konjac), are boiled/simmered in a shallow iron pan.
In most sukiyaki recipes, thinly sliced beef is stir-fried in beef fat and then using that oil, a sauce called "Warishita" (割り下) is made with dashi (Japanese soup stock), sugar, soy sauce, and sake.
Then, ingredients such as scallions, Napa cabbage, crown daisy, shiitake mushrooms, enokitake mushrooms, grilled tofu, Shirataki noodles and wheat gluten are added.
When it has boiled to some extent, it is served with a raw, beaten egg.
Although this is one of the most popular Japanese dishes, Japanese people do not eat it every day, and is more common to eat it on special occasions or at family gatherings.

The History of Sukiyaki

During the Edo period, fish and vegetables were cooked in a box made of cedar wood and stewed in miso. This was referred to as "Sugi-yaki" (杉焼き), based on the Japanese word for cedar, "sugi" (杉).
There were also different cooking methods that involved using a worn out shovel to cook chicken, whale meat, fish, duck, etc., over a fire.
These are the origins of today's sukiyaki, but there is also a theory that it was called "sukiyaki" because of the use of thinly-sliced (すき身, pronounced "sukimi") meat.
When the port of Yokohama was opened at the end of the Edo period, meat-eating culture spread, and there is a record of a restaurant serving beef nabe (鍋, "hot pot") in Osaka in the fourth year of the Ansei period (1858).
Later, beef hot pot was introduced to Tokyo, and Otokichi Takahashi established a beef nabe restaurant called "Ota Nawa Norenm" which established a style of beef nabe cooked in miso.
Prior to the Edo period, there was a seafood type sukiyaki dish called "Uosuki" (魚すき) that originated in the Kansai region.

Sukiyaki in the Various Regions of Japan

In Kansai style sukiyaki, beef is grilled in a frying pan or a pot with beef fat and seasoned with sugar and soy sauce, then simmered in a sukiyaki pot.
After that, vegetables such as leeks and crown daisy, as well as, tofu and konnyaku are mixed in with the soup.
Kanto-style sukiyaki is based on the beef hot pot style that was popular in the Meiji period. Meat and vegetables are boiled in a pot with warishita (soup stock mixed with sugar, rice wine, sake, etc.) beforehand, and stewed.
At the time of its origin, because the quality of the meat was poor, it was seasoned with miso sauce, but with the improvement of the quality of meat and the influence of sukiyaki in the Kansai region, sukiyaki became soy sauce-based.
The most popular Sukiyaki restaurants in Tokyo are Imahan in Ningyo-cho, ONIQUE TOKYO, and Moritaya.
In Hokkaido and the Tohoku region, it was common to use pork instead of beef.
Beef was expensive to begin with and in Japan it was uncommon to eat beef, so some restaurants still call it beef sukiyaki to this day.
In Aichi Prefecture, chicken is also used for sukiyaki.
In the Owari area of Aichi Prefecture, Nagoya Cochin's sukiyaki is referred to as "hikizuri" (ひきずり).

In the Lake Biwa area of Shiga Prefecture, there are also dishes made with eels, catfish and other lake and river fish in addition to beef.
In Osaka Prefecture, fish and shellfish are used in "Oki-suki," and in Kochi Prefecture, whale sukiyaki is also eaten.
In Okinawa Prefecture, sukiyaki is cooked in a frying pan, as there is no culture of using pots and pans.
In some restaurants, vegetables such as cabbage and lettuce are used, and sukiyaki with a fried egg is served as a menu item at many popular restaurants.
It is also sometimes served with margarine, Tabasco, or hot sauce.

Sukiyaki with a Beaten Egg

The most common way to eat sukiyaki is by dipping the meat or vegetables into a beaten egg.
The origin of this popular practice of dipping the boiled food into a raw egg mixture is uncertain, although there are some theories about how it came about, such as to cool down the heat and to neutralize the rich flavors.
It is said that early beef nabe did not use an egg, and it's said that the renowned artist Rosanjin did not use an egg. It is also said that the use of an egg may have been related to hot pot dishes that used the shamo chicken.
Even when making sukiyaki at home, commercially available tare is heavily seasoned, so it's common to use a beaten egg.

Sukiyaki and Shabushabu are two of the best examples of Japanese cuisine, or "Washoku" (和食), which was designated a UNESCO cultural heritage in 2011.
Here are six great restaurants where you can enjoy sukiyaki and shabu-shabu.

1. Shibazakura (日本料理芝桜)
The first restaurant is Shibazakura (Nihonryori Shibazakura), located in The Prince Park Tower Tokyo in Tokyo's Shiba Park.
This restaurant serves traditional kaiseki cuisine.
You can enjoy the aesthetics of Japanese cuisine, with seasonal flavors matched with sake, shochu, wine, and carefully selected dishes.
The high-class sukiyaki, served with a view of Tokyo Tower, is exquisite.

2. Kakiyasu (牛鍋店柿安)
The second restaurant is Kakiyasu, a beef nabe restaurant established in Kuwana City, Mie Prefecture in 1871.
It uses exclusively Matsusaka beef raised in the Ise plains surrounded by natural greenery and rivers.
You can enjoy the long-established taste of beef that is expertly handled from the time the cows are raised to the time they're cooked by skilled chefs.
Kakiyasu serves the finest Matsusaka beef in a variety of preparations, including charcoal-grilled, sukiyaki, and shabushabu.
You can enjoy delicious sukiyaki in a high-quality space that combines a Japanese-style room with a modern design.

3. Mita Basara (三田ばさら)
The third restaurant is Mita Basara in Akabanebashi.
At this restaurant, you can try the incredibly rare tomato sukiyaki, a combination that may seem like a mismatch, but the acidity of the tomatoes go great with the Yamagata beef and sweet warishita sauce.
The use of olive oil instead of beef fat to fry the beef gives it a flavor reminiscent of Italian cuisine.
You can add pasta to the leftover soup to create a meat sauce flavor pasta as well.

4. Iseju (伊勢重)
The fourth restaurant is Iseju.
This is a long-established restaurant that has been in business for more than 140 years since it was established in Kodenmacho in 1894.
Iseju has inherited a traditional technique of removing the finest grade A5 marbled wagyu beef by hand, one cut at a time, to bring out the full flavor of the beef.
In addition, you can enjoy a delicious collaboration between their secret warishita sauce and cuisine cooked over a charcoal fire.

5. Yoshizawa (すき焼き吉澤)
The fifth restaurant is Yoshizawa's, founded in 1924.
Located in Ginza, this restaurant was originally a butcher shop and because they are also a middleman for the Tokyo Meat Market (食肉市場), the owner buys whole cows that he carefully selects himself.
The beef used in Yoshizawa's sukiyaki is selected by a skilled chef and slowly matured in a water-cooled refrigerator to lock in the natural flavor of the meat.
In addition, the eggs used are produced by chickens that are raised at a designated farm in Tochigi, where the hens are supervised during their daily meals.
We recommend using a combination of ponzu and sesame sauce for the sauce, which gives it a unique taste that you won't find in other restaurants.

6. Omoki Ginza (しゃぶしゃぶすき焼き専門店おもき)
The sixth restaurant is Omoki, a shabu-shabu/sukiyaki specialty restaurant located in Ginza.
The meat used is carefully selected sangen pork raised in Matsusaka City, Mie Prefecture.
It's characterized by the delicious tasting fat that has no odor and doesn't leave an aftertaste in one's mouth.
They also offer freshly picked vegetables from Matsusaka that are picked every morning.
The beef is Matsusaka beef, one of Japan's top three wagyu breeds, with a beautiful marble, and a soft texture that melts in your mouth.

Some of these shops offer online ordering or take-out, so be sure to check out the information on their official websites!