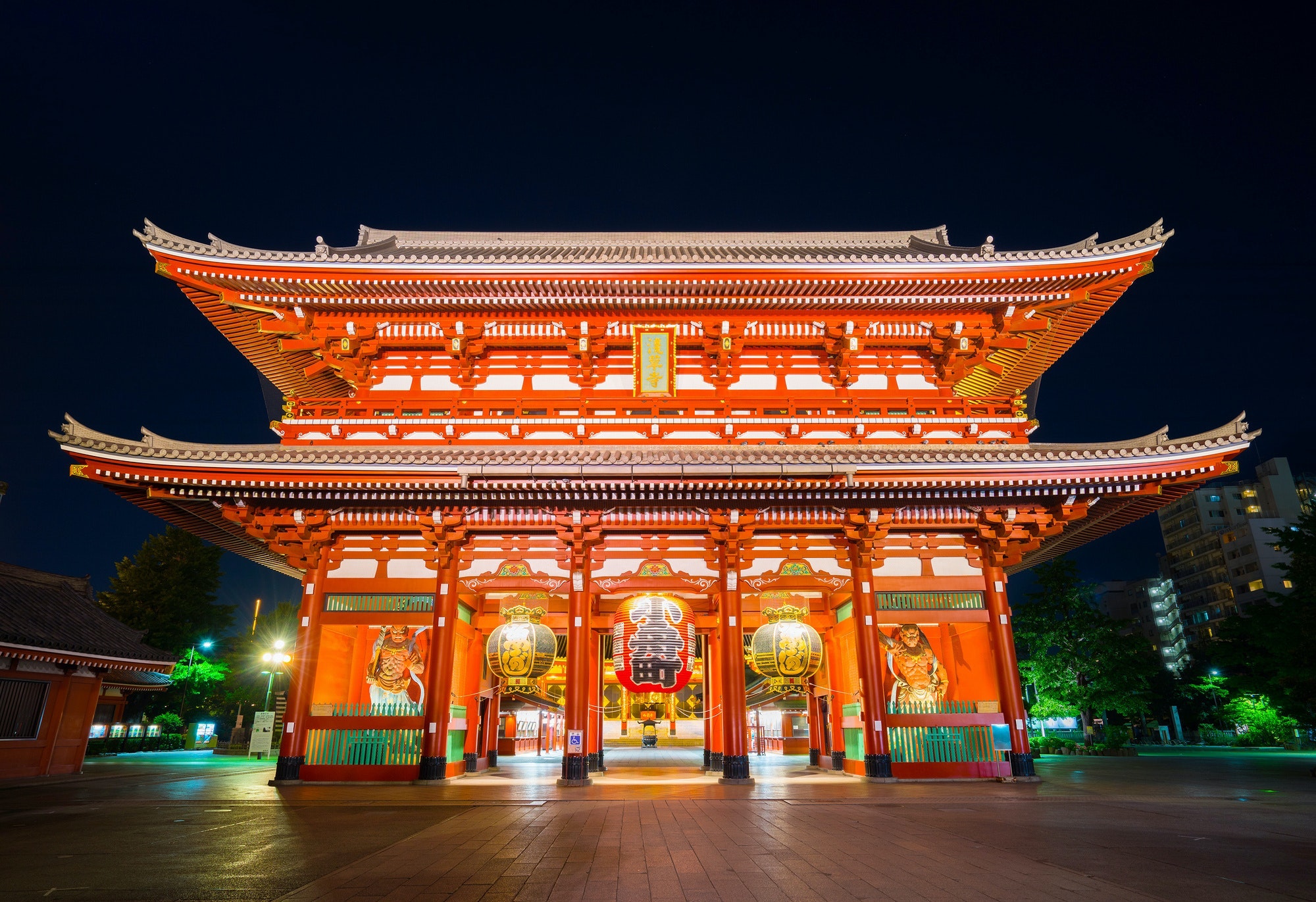 Sensoji Temple is located in Tokyo's Taito Ward (台東区, taito-ku).
Every day from sunset to around 11:00 in the evening, the Kaminarimon Gate (雷門, kaminarimon), Nakamise Shopping Street (仲見世, nakamise), and the main hall of Sensoji Temple are lit up beautifully.
Even at night, visitors are allowed to worship at the brilliant red Kaminarimon Gate and the temple itself.
Many people pop in to visit after checking in at a hotel, or while waiting for the bullet train.

Sensoji Temple is hosting a light-up event to commemorate the 400th anniversary of the Edo Period, aiming to promote the image of Asakusa as an international city under the slogan "Asakusa - Shining in the 21st Century" (輝く21世紀の浅草).
The main hall, Hozomon Gate, and the five-storied pagoda of Sensoji Temple are lit up, creating a mystical, breathtaking night view.

As seen from 2:13 in the video, on Nakamise Shopping Street, there are also painted shutter murals known as "asakusa emaki (浅草絵巻)" painted on the gates to the shops.
The night view of Sensoji Temple, with Tokyo Skytree soaring into the sky opposite Nakamise Shopping Street, coupled with beautiful weeping cherry blossoms, is great for taking Instagram photos, so be sure to bring along your camera when exploring the area.

Sensoji Temple is known for being the oldest temple in Tokyo, on top of having huge numbers of visitors (ranked within the top 10 temples in all of Japan).
The temple belongs to the Sho-Kannon Sect and is dedicated to Kannon Bosatsu (the Bodhisattva of compassion), with a statue of the deity enshrined within Kannon Hall.

Summary of Sensoji Temple at Night

As you can see, Sensoji Temple is a must-visit spot not only during the day, but also at night!
As times vary by season, be sure to check out times for the light-up event before visiting.
There are also many restaurants near Sensoji that serve delicious food!
Kamiya Bar (神谷バー), Asakusa ROX (浅草ROXまつり湯), and Hoppy Street (ホッピー通り), are a few popular spots.

In the video, you can also see Tokyo Skytree, another popular tourist attraction in Tokyo.
The beauty of the crossover between "new" and "old" in Tokyo is one of the highlights of the video!