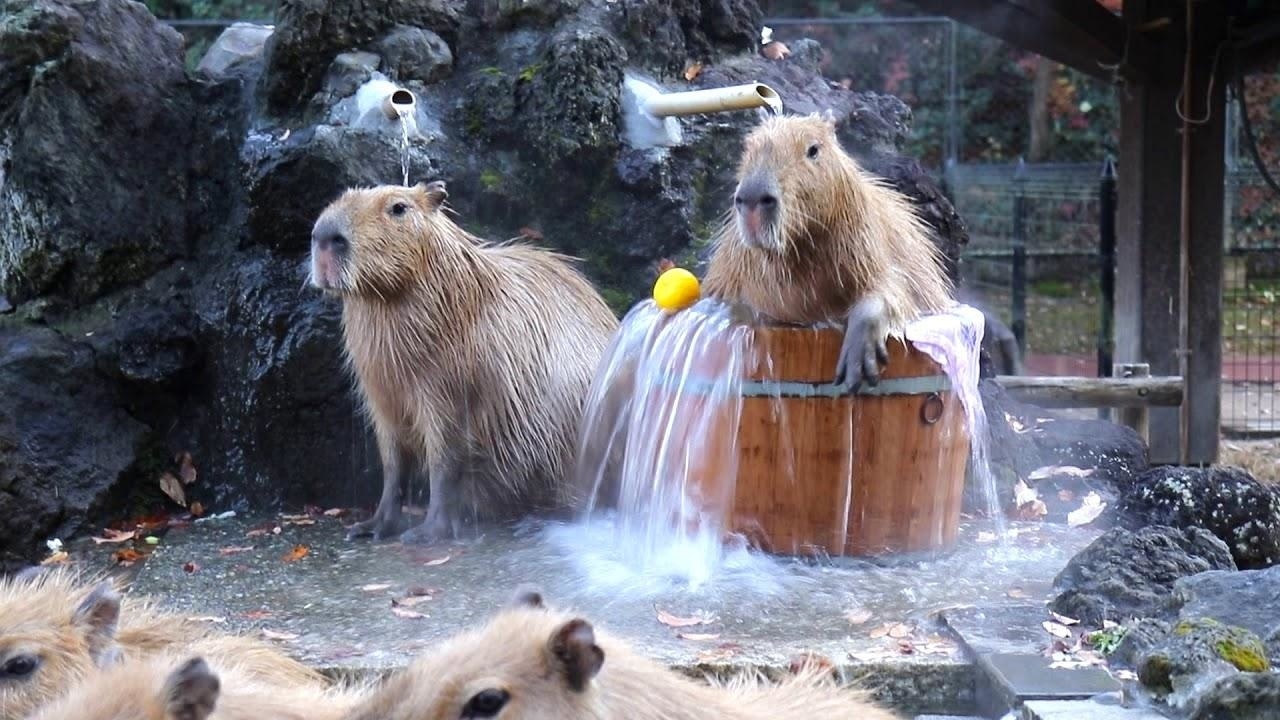 Capybaras are the largest members of the rodent family, and the video 「みんなで入浴 カピバラ温泉～桶風呂～始めました！ 2017.12.5（埼玉県こども動物自然公園 公式/SaitamaChildrensZoo official ）capybara onsen』, created by 「埼玉県こども動物自然公園（SaitamaChildrensZoo）」compiles scenes of capybaras enjoying bathing in the hot springs.

These scenes of six capybaras considerately entering the hot springs together will warm your heart.
The video has also become popular, not only among the Japanese, but also with people from overseas.

The Capybaras Introduced in the Video, and Why They’re in the Hot Springs

Capybaras are members of the rodent family, and can be found from Panama in South America, all the way to Northeast Argentina.
With calm and gentle personalities, capybaras are also popular as pets, and are the largest members of the rodent family, growing up to 106 to 134 centimeters.
Males weigh around 77 to 141 pounds, while females weigh around 81 to 145 kilograms.

Being proficient swimmers, capybaras tend to escape to the water once they sense approaching danger.
They can remain underwater for up to 5 minutes.
Although the water is their shelter and haven, due to their warm natural habitat, capybaras are weak to the cold.
As a countermeasure to combat cold winters, the “Capybara Hot Springs” was created.

The Capybara Hot Springs and the Saitama Children's Zoo

The Saitama Children's Zoo holds a “Capybara Hot Springs” event every year.
The event lasts from November through March, with the location being at the Capybara/Wallaby enclosure.
Pools built to look like rock baths are filled with water warmed to a suitable temperature by the sun.
Besides the unique springs such as the yuzu bath, a waterfall bath and tub bath are also prepared.

The video begins with five capybaras heading towards the hot springs.
Of the five, three enter the bath with floating yuzu, one makes for the smaller tub bath, and the last heads for the waterfall bath.
Without any jostling or competition for space, the atmosphere is calm and peaceful.
From 1:22 in the video, another capybara appears.
The scene of this capybara unobtrusively lowering itself backside-first into the yuzu bath is extremely heartwarming.

From 1:43 in the video, the capybara in the waterfall bath can be seen wiping its face, and from 1:53 is seen staring peacefully into space, contently settling into the water.
The fact that these capybaras act just like little humans will bring a smile to your face. In the Saitama Children's Zoo, you can enjoy viewing the capybaras while warming your feet in the foot baths.
Why not stop by and enjoy the relaxing hot springs together with the capybaras?

Saitama Children's Zoo is a spacious park located in Saitama Prefecture, Higashi-Matsuyama City in Japan's Kanto region (関東地方・埼玉県東松山市, Kanto-chiho・Saitama-ken Higashi-matsuyama-shi).
Besides the zoo, the park also boasts the "Children’s Castle" (こどもの城, Kodomo no jo) as well as a large playground (みんなの広場, Minna no hiroba) where children can run around and play.
In the playground is the “Adventure Forest Athletics” area (冒険の森アスレチック, Bouken-no-mori asurechikku) as well as the “Shabu-shabu Pond” (じゃぶじゃぶ池, Shabu-shabu ike) with water activites. Here, children can enjoy playing and being active.

In the animal area, pony-riding as well as animal-feeding activities are available.
Also, from September of 2019, the “Small Animals Enclosure” (ecoハウチュー, eco hauchu) was opened. There, you can observe small animals such as hedgehogs.

The video introduced in this article shows capybaras enjoying a nice soak in the hot springs of the Saitama Children's Zoo.

Definitely take a second to relax by watching this video of capybaras relaxing in the hot springs.