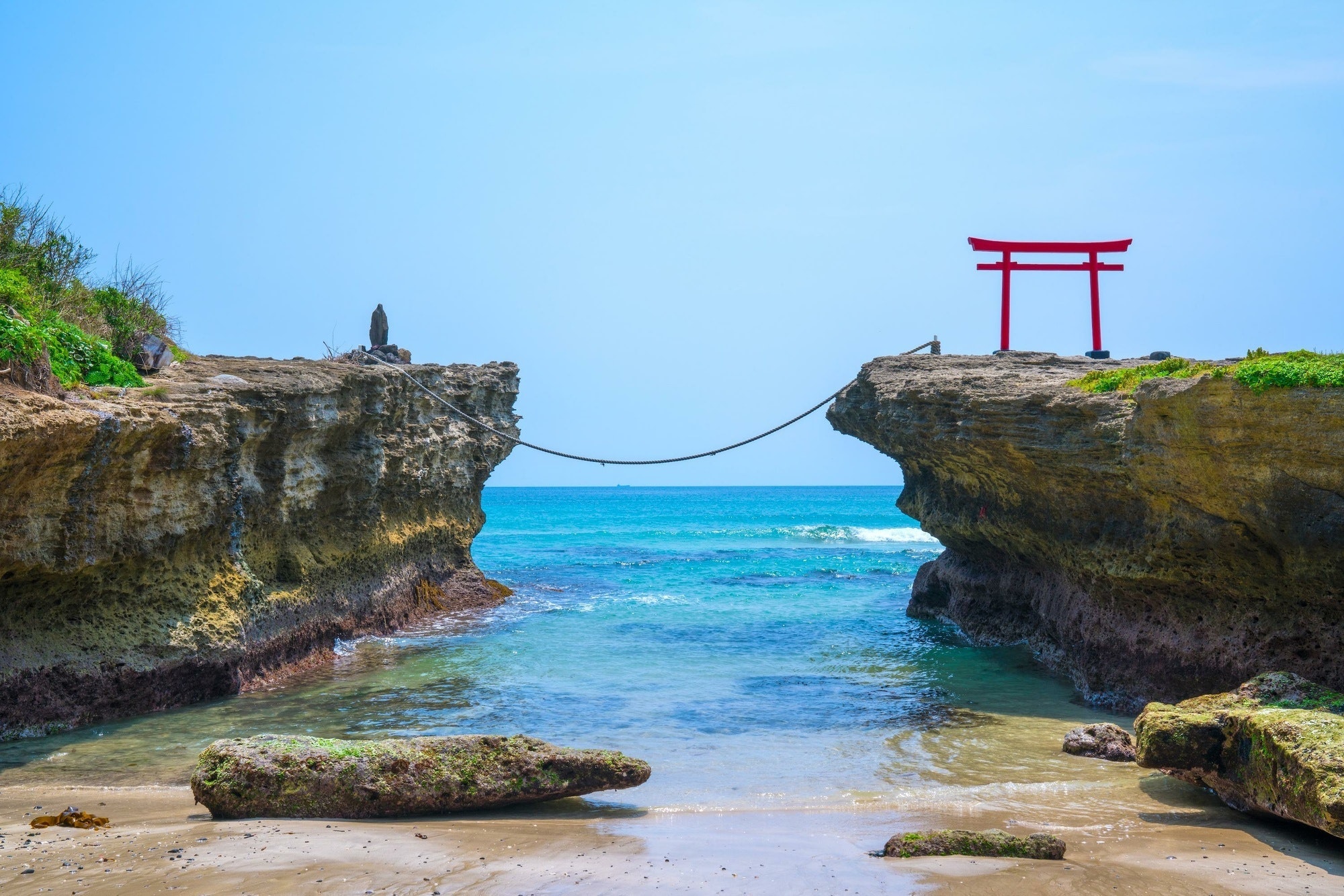 The Encounter of Waves, Brought Together by Two Islands, Is Reminiscent of Long Lost Lovers Being Reunited. Come Check Out the Amazing Scenery at Lover’s Cape in Wakayama Prefecture!

Beautiful Scenery in Shizuoka Prefecture! Enjoy Sightseeing in the Blue Ocean at Izu Shirahama Beach and the Historic and Sacred Shirahama Shrine!

Introducing the Popular Family-Friendly Takenohama Beach! Enjoy the Crystal Clear Waters of Toyooka, and Spectaculars Views of the Ocean and Mountains!

Suishohama Seaside Resort in Fukui Prefecture Is Regarded as One of the Top Beaches in Japan! It's Hard To Believe This Cobalt Blue, Crystal Clear Water Is in Fact the Sea of Japan!

Shirasaki Coast in Wakayama Prefecture, Called the "Aegean Sea of Japan," Is Just Like a Painting! Introducing the Charms and Activities of Shirasaki Coast!

An Introduction to Japan's Beaches

There are many coast lines, beaches, and seas in Japan.
Each one has its own unique charm, and the beauty and scenery of these coastlines, beaches, and seas are endless.
Each person has a different idea of the type of beach or seaside area they want to visit.
If you're looking to go for a swim, it's helpful to know when the beach opens and whether there's transportation access or not.

The following is an introduction to popular beaches and seas for those interested in Japan's various bodies of water.

There are many coasts, beaches and seas to choose from, so it's useful to narrow down your choices to some extent.
Let's take a look at some of the coasts, beaches, and seas in Japan.

・Ishigaki (石垣島)
Ishigaki is an island located about 410 km southwest of Naha, the main island of Okinawa.
It is known as one of the most famous tourist destinations in Japan.
There are various ways to enjoy the beautiful scenery of the beaches, and you can also go diving and eat seafood, such as Pacific bluefin tuna.
Kabira Bay is one of Japan's most spectacular spots for viewing the emerald green waters.
It has been selected as one of the top 100 views of Japan.

・Taketomi Island (竹富島)
Taketomi Island is one of the islands in the Yaeyama Islands of Okinawa Prefecture.
It is famous for its beautiful beaches, coastlines, and waters.
It is also known for its star sand at Kaiji beach.
Kondoi beach is characterized by its white sandy beaches.

・Kouri Island (古宇利島)
Kouri Island is an island in Okinawa Prefecture.
Tine Beach is also known as Heart Rock Beach because of its heart-shaped rocks.
In addition, there is a cave at Chigunu beach where Adam and Eve are said to have lived.

・Iriomote Island (西表島)
Iriomote Island is an island in Okinawa Prefecture.
It is famous for its mangrove forests and the wild Iriomote cat.
It has been called the Galapagos of the Orient.
Enjoy the beautiful coral reefs on the beach and in the ocean.

・Yakushima Island (屋久島)
Yakushima is an island located in Kagoshima Prefecture and is unique in that it has been registered as a World Heritage Site.
Both subtropical and subarctic plants have been identified here.
While there aren't many facilities along the coast, one of the great things about the island is that you can encounter sea turtles while swimming.
Inakahama Beach is also known for being a wetland registered under the Ramsar Convention, in addition to being a spawning ground for sea turtles.

・Hateruma (波照間島)
Hateruma is Japan's southernmost inhabited island located in the Yaeyama Islands in Okinawa Prefecture.
In addition to having beautiful beaches and oceans, it is also known as a place to observe the Southern Cross.
The waves on the north beach are calm and you can enjoy swimming here.

・Shirarahama Beach (白良浜)
Shirahama is a sandy beach located in Shirahama, Wakayama.
Its quartz sand is characterized by its white color and silky texture.
In summer, numerous parasols can be seen lining the shores.
It's known as a popular beach in the Kansai region.

・Tsunoshima (角島)
Tsunoshima is an island in Yamaguchi Prefecture.
It is also famous as a movie location.
The beach and ocean are beautiful.
Many people come to see the spectacular view of Tsunoshima Bridge.

・Jodogahama Beach (浄土ヶ浜)
Jodogahama is a beach in Miyako City, Iwate Prefecture.
It is also a ria on the Sanriku coast.
A ria is an intricate submerged coast with narrow bays.
A submergent coastline is a coast where the sea level was raised by land subsidence.

・Oarai Sun beach (大洗サンビーチ)
Oarai Sun Beach is a swimming beach in Oarai, Ibaraki Prefecture.
It's a beautiful beach that has been selected as one of the top 100 swimming beaches.
It is also known as a "universal beach," with facilities that are designed to be enjoyed by people with disabilities.

・Ishihama Beach (伊師浜海水浴場)
Ishibahama Beach is located in Hitachi City, Ibaraki Prefecture.
This beach is famous for its loggerhead sea turtle spawning grounds. One of the features of this area is a series of pine forests along the coast.
Japanese cormorants also fly here often.

・Moriya Beach (守谷海水浴場)
Moriya Beach is located in Katsuura City, Chiba Prefecture.
Access is a 10-minute walk from JR Kamiso Okitsu station.
There is a ferry island 170 meters off the coast.
The waters here are also incredibly clear.

・Maehama Beach (前浜海岸)
Maehama Beach is a beach located in Kozu Village in Tokyo.
You can enjoy surfing all year round here, except when there are dangerous waves or typhoons.
It is also characterized by its 800 meter stretch of continuous white sand.

・Tomari Beach (泊海水浴場)
Tomari Beach is located on Shikinejima Island in Tokyo's Niijima Village.
Located just 5 minutes from Nobushi Port on foot, it is characterized by crystal clear waters.
The beach is surrounded by large rocks.

・Ogi Ike (扇池)
Ogi Ike is a scenic spot on the Ogasawara Islands.
It is characterized by turquoise waters and sandy white beaches.
It is also famous for the presence of sub-fossils of the mandarina luhuana, which is believed to have gone extinct around 1,000 years ago.

・Futatsugame Beach (二ツ亀海水浴場)
Futatsugame Beach is located on Sado Island in Niigata Prefecture.
It is also known for its crystal clear waters and scenic beauty.
The island, called Futatsugame, gets its name from the appearance of two turtles huddled together (二つ, Futatsu "two," 亀, kame/game, "turtle").

・Hirizo Beach (ヒリゾ浜)
Hirizo Beach is a beach located in Minami-Izu, Shizuoka.
It is known as a tourist spot for its clear waters and snorkeling.

・Atashika Beach (新鹿海水浴場)
Atashika Beach is located in Atashika, Kumano City, Mie Prefecture.
It's a 10-minute walk from JR Atashika Station.
It's characterized by its clear blue waters and sandy white beaches.
You can also enjoy water sports such as sea kayaking here.

・Chirihama Beach (千里浜海水浴場)
Chrihama Beach (Chirihama Nagisa Driveway) is a tourist spot where you can park your car on the beach and enjoy swimming.
In summer, the Chirihama Sand Statue exhibiting objects made of sand can be admired next to the Chirihama Rest House.

・Suishohama Beach (水晶浜海水浴場)
Suishohama Beach is located in Mihama, Fukui Prefecture.
The white sand is characterized by its fine texture.
Some people enjoy water sports such as windsurfing here as well.

・Mizu Island (水島)
Mizu Island is an uninhabited island at the tip of Tsuruga Peninsula in Fukui Prefecture.
When swimming is allowed here, you can ride a ferry that operates daily.
It is characterized by clear waters and white sand.

・Uradome Coast (浦富海岸)
The Uradome Coast is a ria in Tottori Prefecture.
It is known for its spectacular view of the Sea of Japan from a sandy hill called Uma no Se "Horse's Back."
A scenic boat ride allows you to enjoy views that cannot be seen from land.

・Tainohama Beach (田井ノ浜海水浴場)
Tainohama Beach is a beach in western Japan that is known for its excellent water quality.
It's 1km-long stretch of white sandy beaches is also a selling point.
It's located in Muroto-Anan Quasi-National Park.

・Kashiwa Island (柏島)
Kashiwa Island is an island in Kochi Prefecture and is designated as Ashizuri-Uwakai National Park.
It is famous for its emerald green waters and scuba diving.
It's a favorite among divers.

・Takahama Beach (高浜海水浴場)
Takahama Beach is a natural swimming beach located in Goto, Nagasaki Prefecture.
With its beautiful sandy white beaches and crystal clear waters, it has been selected as one of the 100 best beaches in Japan.

・Hitotsuku Beach (人津久海水浴場)
Hitotsuku Beach is a tourist attraction in Hirado, Nagasaki Prefecture.
The beach is as beautiful as the Neshiko Beach, which has been selected as one of the top 100 swimming areas.

・Tsutsuki Beach (筒城浜海水浴場)
Tsutsuki Beach is located in Iki, Nagasaki Prefecture.
It has been selected as one of the top 100 beaches in Japan and one of the top 100 swimming beaches in Japan.
It is characterized by fine, sandy white beaches.
It is also important to note that it is located next to Tsutsuki Fureai Square, which includes a camping ground and a barbecue area.

・Aoshima Beach (青島海水浴場)
Aoshima Beach is a swimming beach in Miyazaki City, Miyazaki Prefecture.
It features a variety of events, such as beach flags and beach volleyball competitions.

・Shimoaso Beach (下阿蘇ビーチ)
Shimoaso Beach is located in Nobeoka City, Miyazaki Prefecture.
In addition to being selected as one of the top 100 swimming areas, it is known for its summer flowers called bayhops, which have leaves that resemble gunbai fans.

・Tomori Beach (土盛海岸)
Tomori Beach is a blue coastline located on Amami Oshima Island in Kagoshima Prefecture.
It's known to be called the "Blue Angel."

There Are Many Attractive Coasts, Beaches, and Seas in Japan

Japan has many coasts, beaches, and seas, and there are many ways to enjoy them, including swimming and scuba diving.

When each beach opens differs from beach to beach, so one must be careful when looking to enjoy swimming in Japan.
It's important to manage risk and behave in a manner that avoids accidents and other problems.