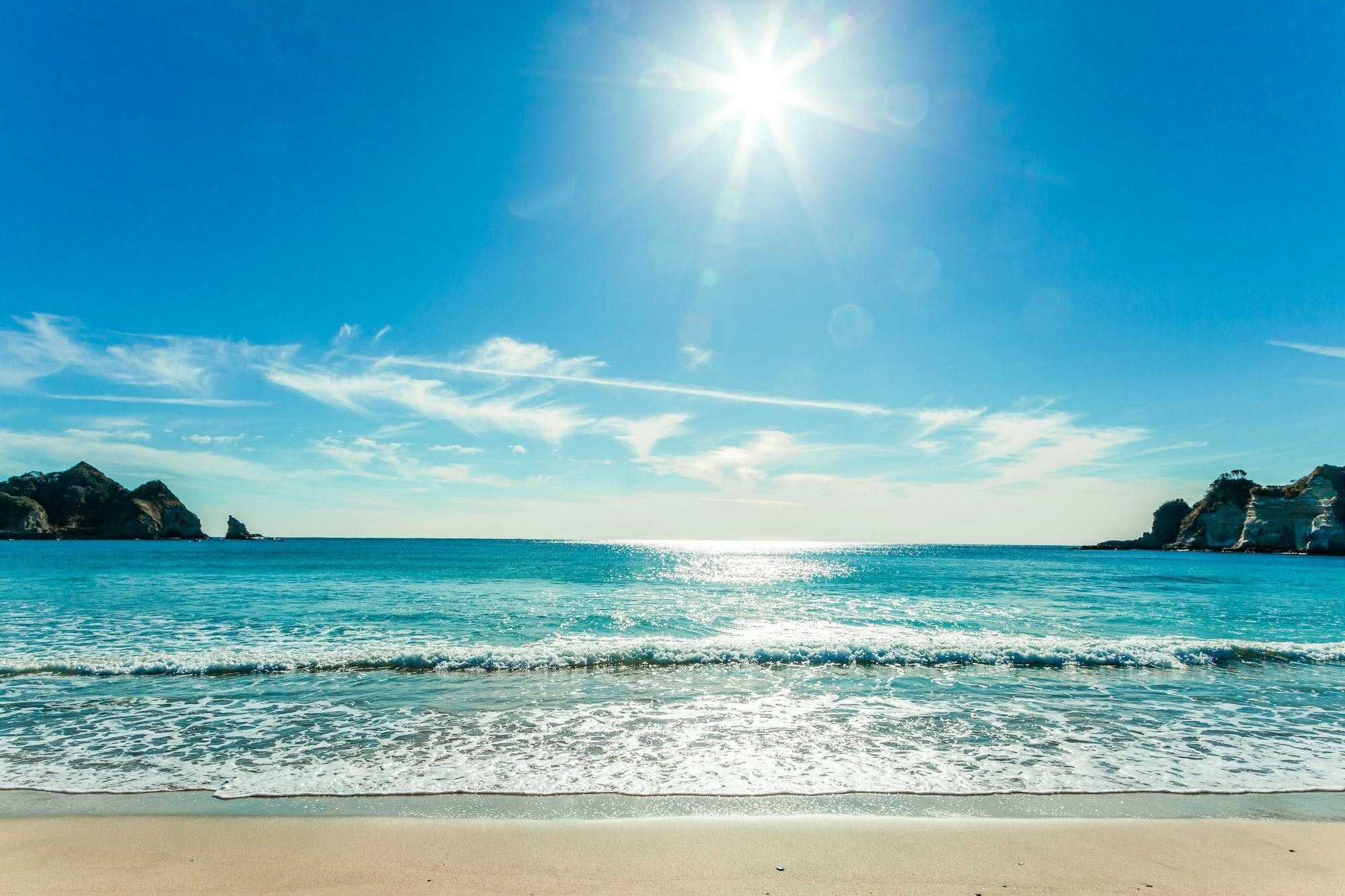 Ubara Beach is located in Katsuura, Chiba, in Japan's Kanto Region, and is part of Minami-Boso Quasi-National Park. The water at Ubara Beach is so clear that it has been called "the Okinawa of Kanto." With its rias coastline, Ubara Beach is a sightseeing spot where visitors can enjoy not only swimming in shallow waters, but also hiking courses and other outdoor activities.
Be sure to check out the video showing aerial footage of Ubara Beach and surfing, taken via drone.

Ubara Beach – A Slice of Okinawa in Chiba!

Ubara Beach in Katsuura, Chiba, is characterized by its clear waters and beautiful, pristine sandy beaches, and has been selected as one of the Top 100 Beaches in Japan.
In summer, a beach is opened in the center of the sandy beach facing Ubara Bay, attracting many people. In addition to swimming and playing on the beach, the area is also known for marine activities, such as snorkeling and surfing.

The Ubara Coast, which includes the Ubara Beach, is also known as a fishing spot, where you can catch fish, such as Japanese whiting, Japanese halibut, and Japanese black porgy.

Furthermore, there are facilities for camping in the vicinity. It has been announced that beach houses will open from July 16, 2022, for the first time in three years, so the area is expected to be crowded this summer. Please note that jellyfish are present during the Obon season (Aug. 13 - Aug. 15), so please be careful when swimming in the sea.

Also on the Ubara Coast, the "Ubara Daimyo Gyoretsu" is held every year on the fourth Saturday in July. This is a spectacular procession of daimyo that is celebrated along with "Ohamaori," a festival in which a portable shrine leaving Yasaka Shrine makes its way to the white torii gate.

The procession parades through the town of Ubara and along Ubara beach for several hours with loud chanting. Unfortunately, the daimyo procession has been canceled in 2022. Let's look forward to next year's event!
You can see the white tower in the video.
[Video] 2:56 - The White Torii Gate of Yasaka Shrine

Other Popular Beaches in Katsuura, Chiba

In addition to Ubara Beach, there are other attractive beaches in Katsuura as well. Below are two such beaches.

[Moriya Beach] Moriya Beach, like Ubara Beach, is located in Minami-Boso National Park, with beautiful scenery, including reefs and sandy beaches, and has also been selected as one of the Top 100 Beaches in Japan by the Ministry of the Environment. Watashima Island is a small island located 170 meters offshore, and is a distinctive feature of the beach.

[Okitsu Beach] This beach faces Okitsu Port, and is known for its calm waves that allow for swimming. It has been selected as one of the "100 Best Beaches for Swimming" by the Ministry of the Environment, and is a popular beach for families.

If you still haven't seen the video showing Ubara Beach be sure to check it out! It's a popular tourist spot for families as well as anglers, surfers, and people who enjoy marine sports.

If you're planning on visiting, be sure to check the weather and wave reports in advance so you can enjoy swimming, surfing, and other marine sports to the fullest.

Ubara Beach is just a 5-minute walk from Ubara Station via the JR Sotobo Line, and has a parking lot that can accommodate 300 cars.
If you're planning to stay overnight during your sightseeing trip to Katsuura, Chiba, you can stay at a guest house or hotel near Ubara Beach, or if you want to enjoy some barbecue, you can use an auto-camping site.

Bottle rockets are prohibited on the beach, but hand-held fireworks are allowed, so feel free to bring your own fireworks if you're staying overnight.

Make some summer memories at Ubara Beach this summer in Chiba!