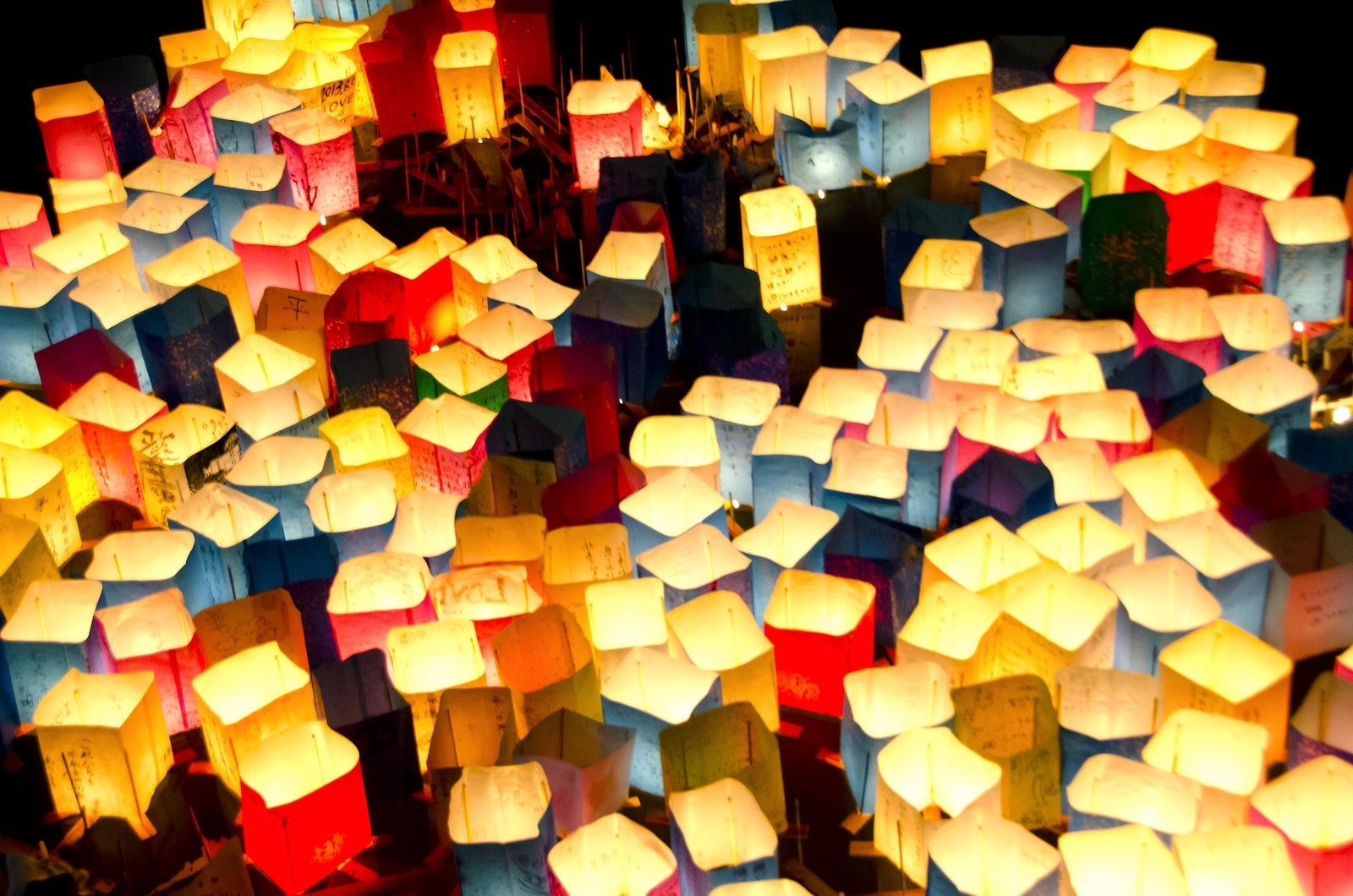 Hiroshima City (広島市, Hiroshima shi) in Hiroshima prefecture, in Japan's Chugoku region, was where the atomic bomb was dropped during World War II.
In Hiroshima City, a lantern celebration is held on August 6th every year at the Motoyasu river (元安川, Motoyasugawa), Hiroshima Peace Memorial Park, located on the shore opposite of the Atomic Bomb Dome.
Make sure to visit Hiroshima City to see the traditional lanterns that mourn the souls of the war dead.

In the lantern flow held at Hiroshima Peace Memorial Park in Hiroshima Prefecture in 2018, featured in the video, colorful lanterns illuminated by lights make a fantastic image as they slowly float down the river.
In this article, we'll introduce the history of lanterns and the prayers that go with them. Be sure to follow along with the video.

The Origin and History of the Ancient Japanese Ceremonial Bonfire

In August, lantern floats are held in various parts of Japan.
This is a kind of festival called the Bon Festival in Japan.
The festival acts as a memorial service to send off the souls of the deceased.
In some areas, in addition to lit lanterns, there are also bon festival offerings.
The origin and history of Japan's bon festival are unclear, but it is said that these festivals were already taking place in various places during the Heian period (794-1185 AD), more than 1200 years ago.

The atomic bomb was dropped on Hiroshima City, Japan, on August 6, 1945.
Hiroshima City holds the Peace Memorial Ceremony on August 6th every year in the hope that the memories of the tragic war that caused many casualties, not be seen again.
After the ceremony is over and the sun goes down, beautiful lanterns float down the Motoyasu River next to the Hiroshima Peace Memorial Park with hopes of peace.
The video introduces this lantern float throughout its entirety, so be sure to follow along and see the beauty of the lanterns as they float downstream.

Visitors to Hiroshima Peace Memorial Park are welcome to participate in the lantern floating ceremony.
After receiving colored paper and candles at the reception tent on the day of the event, you can write messages on the colored paper with wishes for peace, comfort and repose.
After the candles are lit, the lanterns float down the river carrying the wishes of the people.

At the Hiroshima Peace Memorial Park, more than 10,000 lanterns are washed down the Motoyasu River.
As you can see in the video, this event is filled with prayers of many people hoping for peace. You can also enjoy the size and beauty of the event throughout the video.
We hope you will participate in the lantern floating event at the Hiroshima Memorial Park, which is meant to repose the souls of those who died in the atomic bombing and to mourn the loss of loved ones.