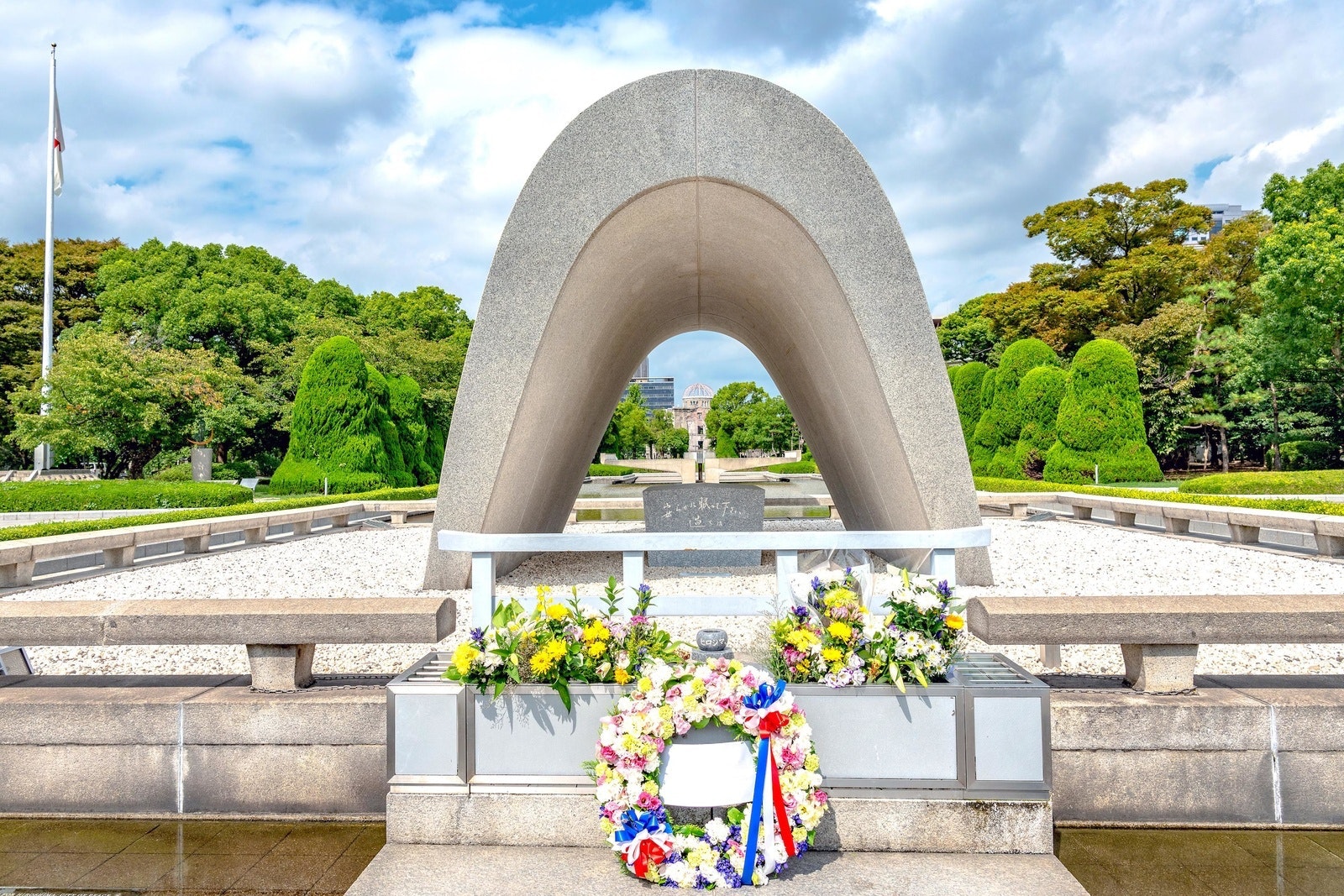 A Look at Peace Memorial Park

Peace Memorial Park is a city park located on the delta where the two rivers of Hiroshima city diverge.
It is 122,100 square meters in size and was completed in August 1955.
It has no entrance fee, is open year round, and is truly a park that represents Japan.
You can see the entire view of the Peace Memorial Park from 0:06 in the video.

The park is home to 35 cenotaphs and memorials, as well as the Hiroshima Peace Memorial Museum (広島平和記念資料館, Hiroshimakinenshiryokan), the Hiroshima National Peace Memorial Hall for the Atomic Bomb Victims (国立広島原爆死没者追悼平和祈念館, Kokuritsuhiroshimagenbakushibotsushatsuitoheiwakinenkan) and the International Conference Center Hiroshima (広島国際会議場, Hiroshimakokusaikaigijo).
You can access the Peace Memorial Park by taking a 20-minute train ride from JR Hiroshima Station (JR広島駅, JR Hiroshimaeki) to Atomic Bomb Dome Station (原爆ドーム前駅,Genbakudomumaeeki) on the Hiroshima Electric Railway (Streetcar).
There is no parking lot at the park, so we recommend using public transport such as a train or bus when you visit.

Peace Memorial Park is one of Japan’s most famous tourist destinations, chosen as one of the "Top 100 City Parks in Japan" and the "Top 100 Historical Parks in Japan."
The Atomic Bomb Dome, which conveys the terror of the atomic bomb, was designated as a UNESCO World Heritage Site in 1996.

The Children’s Peace Monument (原爆の子の像,Genbakunokonozo), a bronze statue of a little girl lifting up an origami crane, consoles the spirits of those who lost their lives in the atomic bomb, and calls for peace.
There are origami crane booths around the statue, where strings of a thousand origami cranes from all over Japan are laid.
You can observe the Statue of Prayer (祈りの像, Inorinozo), a monument built on the 15th anniversary of the end of the war, and the Phoenix Trees Exposed to the Atomic Bomb (被ばくしたアオギリ,Hibakushitaaogiri), which sprouted the following year despite half of its trunk being burned by the atomic bomb from 0:47 in the video.

The sound of the Peace Bell (平和の鐘,Heiwanokane), which is rung as a prayer for peace, has been chosen as one of the "100 Soundscapes of Japan."
Also, if you can have the tourism volunteer guide show you around the model course inside the park, you can learn in depth about the history and famous areas of the park, making it a popular choice for tourists.

You can also take part in the Lantern Float (とうろう流し, Toronagashi) held on the river next to the Atomic Bomb Dome on August 6th.
You can feel the emotions of countless people come together as one, as the prayers for peace are reflected on the river.
The Lantern Float can be observed from 2:17 in the video.

A recommended tourist spot near Peace Memorial Park is Itsukushima Shrine (厳島神社, Itsukushimajinja), a World Heritage Site and also one of the most prominent tourist attractions in Hiroshima and Japan.
The shinden-zukuri style building (a style of architecture used for nobles’ residences during the Heian period) on the sea is popular as a beautiful, instagrammable tourist attraction.

After visiting some tourist attractions, enjoy some local Hiroshima dishes!
There are many Hiroshima-style okonomiyaki restaurants near Peace Memorial Park.

Visiting Hiroshima Peace Memorial Museum, which was renovated in April 2019, to look at the exhibits of atomic-bomb-related materials and artifacts, and remembering the people who were lost on that day, is a life-changing experience.
We hope this article and video inspired you to visit Peace Memorial Park in Hiroshima Prefecture.