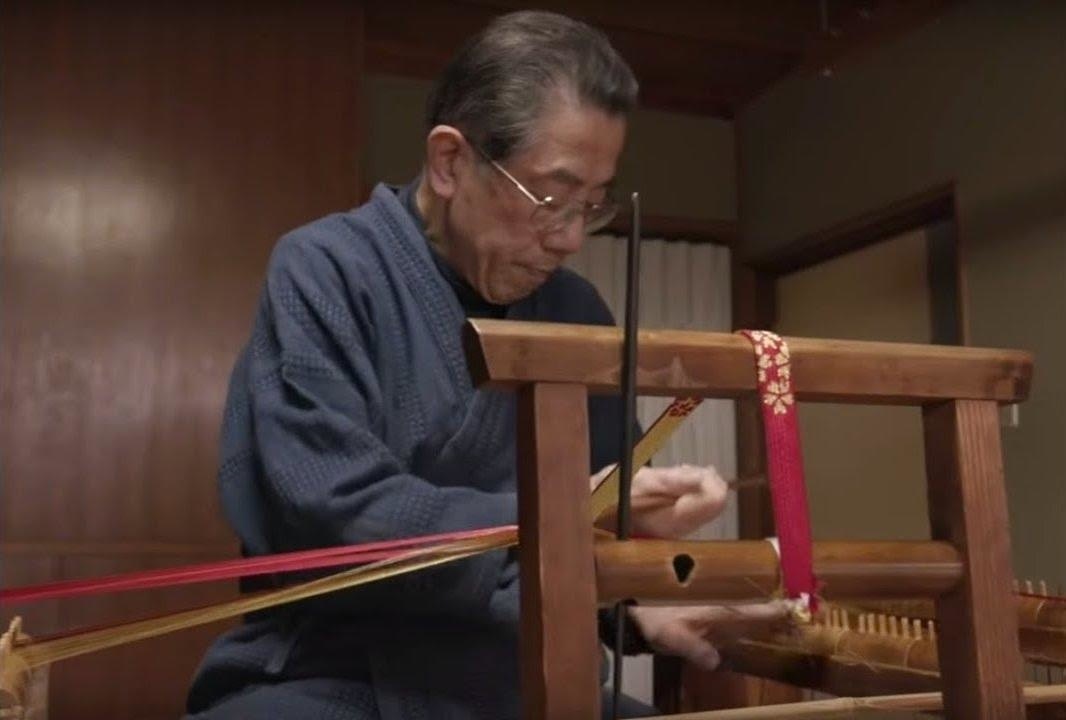 This video is “TEWAZA- Iga Kumihimo Braided Cord,” introducing Iga Kumihimo, produced by “Japan Traditional Crafts Aoyama Square.”
Iga Kumihimo is a traditional handicraft that has gained a lot of attention thanks to the popular animated movie “Your Name.”
It has been popular since ancient times, used to make Kimono accessories, such as Obi straps.
Kumihimo’s charm lays in its beautiful design, which has been hand-braided using elaborate techniques.
Let’s peek into the beautiful world of Iga Kumihimo, where the craftman’s amazing attention to detail is packed into his crafts, and enjoy the traditional Japanese culture.

The video shows a craftsman carefully making Iga Kumihimo by hand.
It's rare footage that allows us an inside look at Iga Kumihimo

The Charm of the Iga Area, Home of Iga Kumihimo

Iga City (伊賀市, Iga-Shi), a major producer of Iga Kumihimo, is a small town located in the mountains of Mie Prefecture. Mie Prefecture (三重県, Mie-Ken), in the Tokai region of Japan.
It is said that the Iga Area was once home to many Ninjas, and is still attracting people’s attention as the “Ninja Village.”

In the neighboring area Ise City, there is Ise Shrine, which has been worshiped since ancient times.
There are many other attractive sightseeing spots in Mie prefecture as well, such as Nabana no Sato, and Meoto-Iwa.
Take your time and enjoy the area.

The History of the Traditional Handicraft, Iga Kumihimo

Braiding has a long history in Japan, dating back to the introduction of Buddhism during the Nara period (710-794 AD).
The technique of Iga Kumihimo, which is said to have originally been used for Buddhist robes and sutras, has changed over time as it has been used for Japanese clothing accessories such as obi fasteners.

At present, Iga Kumihimo is popular not only for making obi fasteners, but also in making accessories, necklace key chains, straps, charms, accessory cases, ties, bracelets, neck straps, and so on.
You can see some of the finished products from 3:11 of the video.

The Process of Braiding Iga Kumihimo

The main process of making Iga Kumihimo braids is to use silk or gold thread and to braid it up using a traditional tool called a “Kumidai.”
You can see the threads dyed in various colors at 0:29 in the video.

"Thread measuring" is the next step you can see from 0:36 in the video.
This determines the length and number of threads.
In this video, nine thin threads are bundled together to make a single thread used for Kumihimo braiding.

Finally, it becomes a “Braid.”
This process is introduced at 0:54 in the video.
Each workshop braids by following the instructions called “Ayagaki,” which have been passed down from one generation to the next.

The craftsman says that the “High loom,” used in the “braiding” in the video, can catch many more bobbins compared to other stands, and that lets them create complicated patterns.
In order to knit beautiful IGA braids, the skill of a craftsman who has been making braids for many years is essential.

You can learn about the history and culture of Iga Kumihimo, its techniques, and how to make it at the “Iga Tradition Hall –Iga Kumihimo Center Kumi-no- Sato” located in Iga City.
You can also experience making various kinds of works such as key chains and bracelets with Iga Kumihimo.

The craftsman explains at 2:42 in the video that, "Kumihimo can stretch because of the diagonal lattice weave. It adapts to the body," and that "a cord made properly with a high loom will stay snug, from morning until you come back home."
Iga Kumihimo is a traditional handicraft that is popular among many people due to its high degree of perfection.
Each hand-braided piece is truly a work of art.

If you are interested in this traditional handicraft after reading this article, why not try it yourself?
You can purchase by mail order, and they offer beginner kits so those who have never tried it before can experience the traditional Japanese culture of Iga Kumihimo!