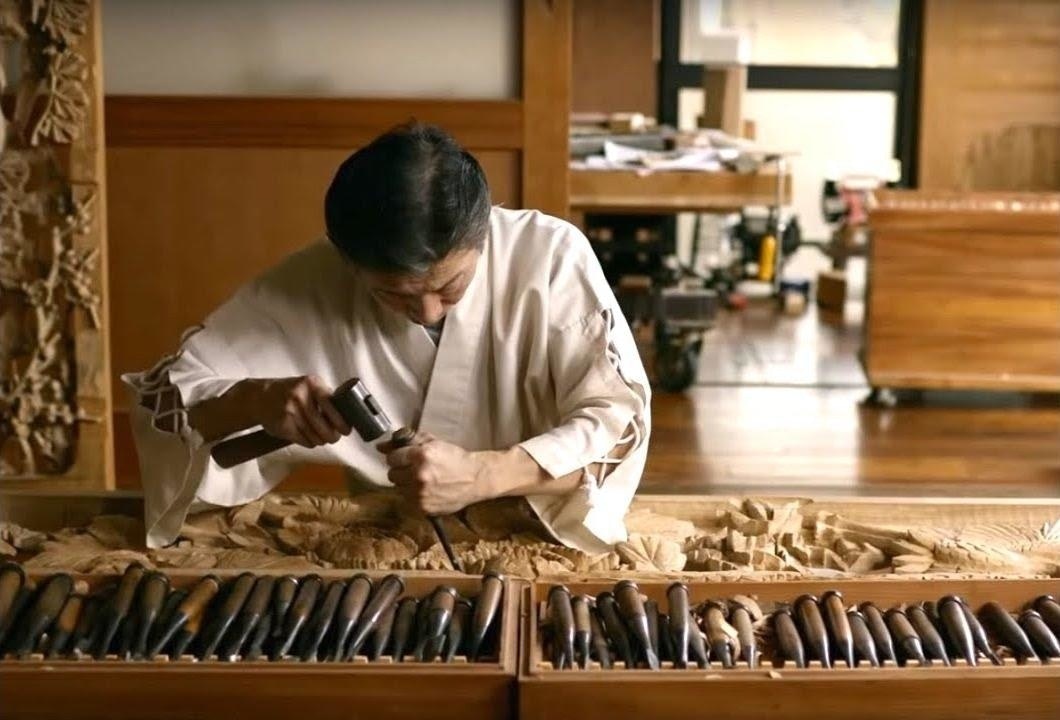 The origins of traditional Japanese Inami Wood Carving can be traced back to 1390, the first year of the Meitoku Period.
When Shakunyo-Shonin, the fifth suzerain of Higashi-Honganji temple in Kyoto founded the "Inami Branch Temple" in Toyama prefecture by order of Emperor Go-Komatsu, he dispatched carpenters specialized in temples and shrines from Honganji temple in Kyoto to the then Kaga Domain (now a region of Ishikawa and Toyama prefectures) in order to rebuild the main building of Zuisenji temple destroyed by fire.
This is said to be the origin of Inami wood carving.

Even after the beginning of the Showa era, the temple and shrine carvings continued to flourish in Inami, and they are now designated as a Japanese cultural heritage by the Agency for Cultural Affairs.
In the video you can see an Inami Wood Carving artisan working diligently, showing his unwavering dedication to the craft.
Completed Inami wood carvings are a thing of beauty.

The traditional techniques and methods of these master craftsmen have been passed on for generations in Nanto city, Toyama.
With the passage of time, these works have become not just ornaments for temples and shrines, but have also become gorgeous Ranma (transoms) and nameplates, which are indispensable for Japanese houses, as well as original works of art.
Many people still enjoy the charms of the traditional Japanese craft to this day.

Inami Wood Carvings - How They're Made

The materials used in Inami wood carving are high quality woods such as camphor and paulownia.

The work process is as follows:

It is literally the work of a master craftsman, using over 200 different types of chisels and carving knives throughout the entire process.
From 2:11 in the video, the craftsman says, "An Inami wood craftsman creates his works using chisels until the very last cut. You have to stay focused in your work to make every little line stand out."

The Craftsmanship Handed Down by the Shrine Carpenters of Nanto City, Toyama Prefecture

These shrine carpenters are highly regarded in the carpenting industry for their exceptional techniques.
While originally, they were used to decorate shrines and temples, they came to be used for decorations as well.
It is thought that the gorgeous and powerful style of these works was mainly due to the fact that during the era of shrine carpentry, they mainly used ancient Japanese mythology and Buddhism as motifs for their work.

The Inami Wood Carving Cooperative was formed in 1947 and Inami wood carving has developed and evolved into a local industry of Nanto city, Toyama prefecture.
It was designated as a traditional Japanese craft by the Minister of International Trade and Industry in 1975.

Now, craftsmen of Inami wood carving contribute to improvement of Japanese culture; exhibiting their art works at places such as the Japan Fine Arts Exhibition, as well as making industrial products.
The artisanal skills cultivated in Toyama Prefecture have become a traditional craft and are utilized in Ranma, lion masks, Tenjin sculptures, screens, panels, and more.

This video shows the long process of making Inami Wood Carvings.
Please watch the video and enjoy the historical craftsmanship and artisanal skills that have been handed down in Japan for generations.