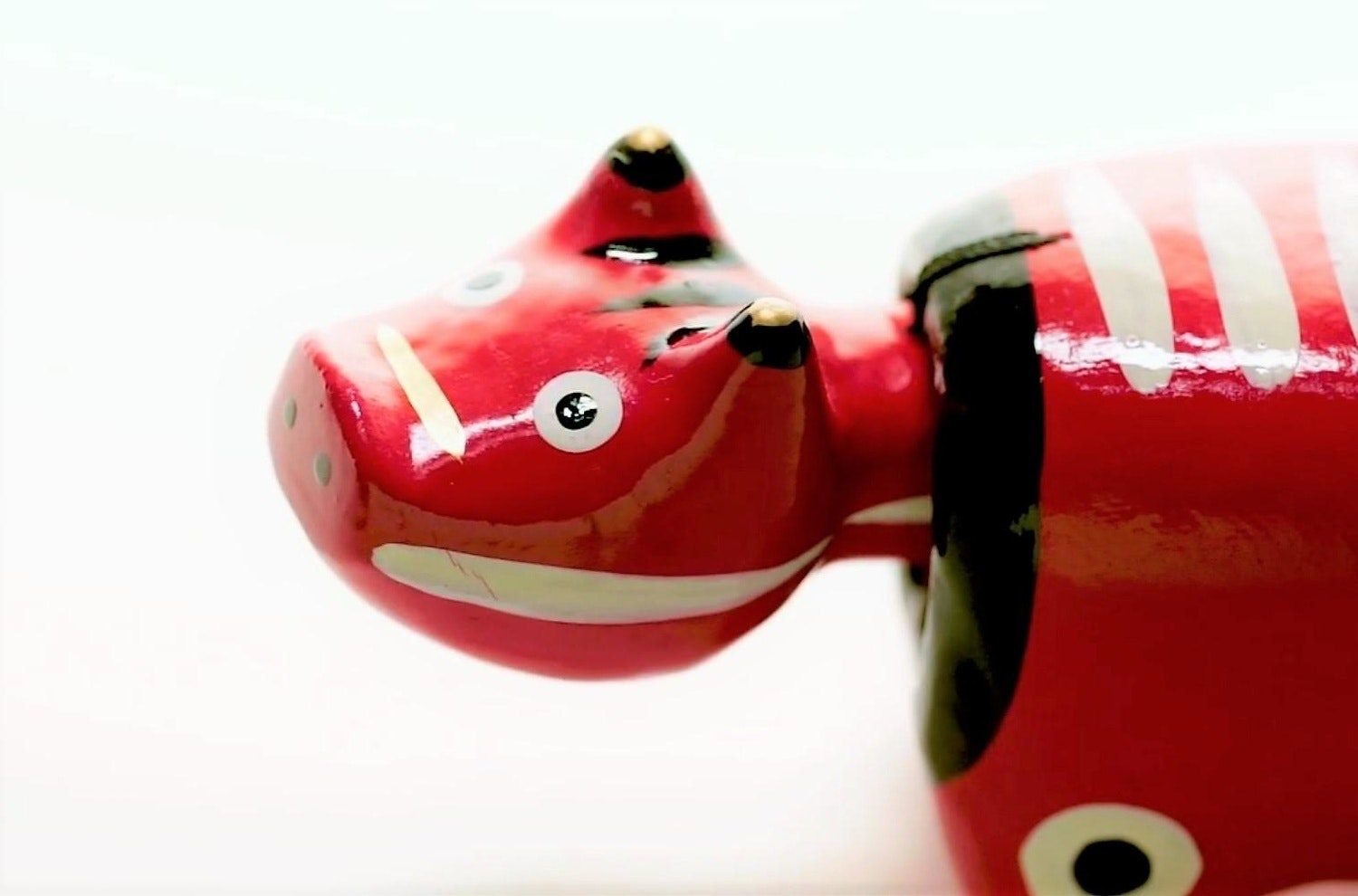 This video (TOHOKU STANDARD 03 FUKUSHIMA PREFECTURE AIZU HARIKO) was created by “Tohoku STANDARD” and introduces the craftsmen of “Aizu hariko,” a traditional craft that the Aizu region of Fukushima, the birthplace of Akabeko, is proud of.

Aizu paper mache is a traditional Japanese craft, local toy, and folk art.
During the Warring States Period (1467 to 1573 AD), Gamo Ujisato, the lord of Aizu in the northeastern region of Japan, Fukushima Prefecture, who served Hideyoshi Toyotomi, invited puppeteers from Kyoto to learn the techniques of puppeteering, which he then used to help promote the industry among the common people.
In front of Aizuwakamatsu station, there is a huge Akabeko, a traditional craft, local toy, and folk art that has taken root in the area.

It is said that the reason why Akabeko is so popular in Aizu is because of the legend of "Akabeko," a herd of red-haired cows that helped rebuild the main building of Enzoji Temple (円蔵寺, Enzoji), home to one of the three major Ākāśagarbha (Bodhisattva of the void) statues in Japan, built approximately 1,200 years ago, which has been passed down through generations.

Hariko (paper mache), is formed by attaching paper or other materials to a frame made of bamboo or wood, and is also known as "haribote" in Japanese.
The floats of the famous "Nebuta Festival" are also made using this technique.

Aizu Hariko is characterized by its bright red coloring, and is mainly made in prayer for child-rearing, good luck, thriving business, and to bring a good harvest.

The two Aizu Hariko artisans in the interview in this video are the writer "Toyorin" of "Nozawa Folk Crafts" and his daughter "Minako Hayakawa."

"There used to be about 30 Akabeko paper mache craftsmen, but they all had different shapes and made the same thing for 50 years," says Toyorin (0:33).
However, from 1:48 of the video, Minako Hayakawa said, "Although it's necessary to inherit the parts that need to be inherited, but it is also important to innovate and make something that fits people's tastes if you want to survive. While certain things may change, the fundamentals remain the same."

The interviews convey the struggle of the artisans to preserve tradition, but also their struggle to breathe new life into it due to practical issues such as the lack of successors and the decline of tradition.

How Aizu Hariko Are Made

In this video, on top of the interview, we see the making of Akabeko at 0:31 in the video.
In this article, we'll go over the steps of how to make a common Akabeko paper mache.
Be sure to take a look at their delicate craftsmanship as you follow along.

Materials: paper, soil, wood, straw, bamboo.
1. A wooden mold is shaped, and a number of sheets of Japanese paper are pasted to it with glue and dried. (Video: 0:31-)
2. When the glue dries, the back and belly are opened with a small knife and the wooden mold is removed.
3. After the wooden mold is removed, Japanese paper is pasted over the mold again and re-coated with a special paint.
4. A top coat of red dye or similar material is used to apply the color. (Video: 0:53-)
5. Patterns are then drawn on the surface with ink. (Video: 1:26-)
6. Finally, the head is attached and it's finished. (Video: 1:45-)

The completed red Akabeko can be seen at 1:22.
They're truly masterpieces!

Nozawa Folk Crafts introduced in this video, deals with various products.
The new colorful folk craft, "wish balls," introduced at 0:02 in the video, were made to aid in the recovery from the 2011 triple disaster.
There are various types of paper mache toys, "zodiac paper mache," which are paper mache tinctures shaped like the animals of the Chinese zodiac, such as rats and boars, and which bob their heads back and forth to bring good luck. Many different varieties are sold every year.

In the year of the dog in 2018, the "Zarukaburi Dog" (A dog wearing a basket on its head) was very popular.
There's "Matryoshka" toys reminiscent of babushka dolls, with eggs inside chicks, inside chickens, "Wedding Koboshi," "Okiagari-koboshi," "Aizu Tenjin," "Fukkomaru" and "Fukumasu," made to aid in the recovery of the 2011 triple disaster, as well as Akabeko, Fukubeko, Senryo-beko, Okame, and Hyottoko masks. These are just some of the different types of Aizu paper mache.

These products can also be purchased via Amazon or Rakuten online shopping websites.

In Yanaizu, the birthplace of Akabeko, you can see Akabeko everywhere in the city.
At the "Rest House Hotto in Yanaizu," you can try your hand at painting in a special space inside the building.
Why not try your hand at making your own original Akabeko?

This traditional craft has been handed down in Japan for a long time, and the craftsmen are very particular about their work and their struggle to pass it on to the next generation.
This article and video were just a small look into the world of Aizu Hariko Craftsmen.

You can see from the video that the long-loved craft is made by the amazing skills of passionate craftsmen.
We hope that this traditional Japanese craft will continue to be passed on for many years.