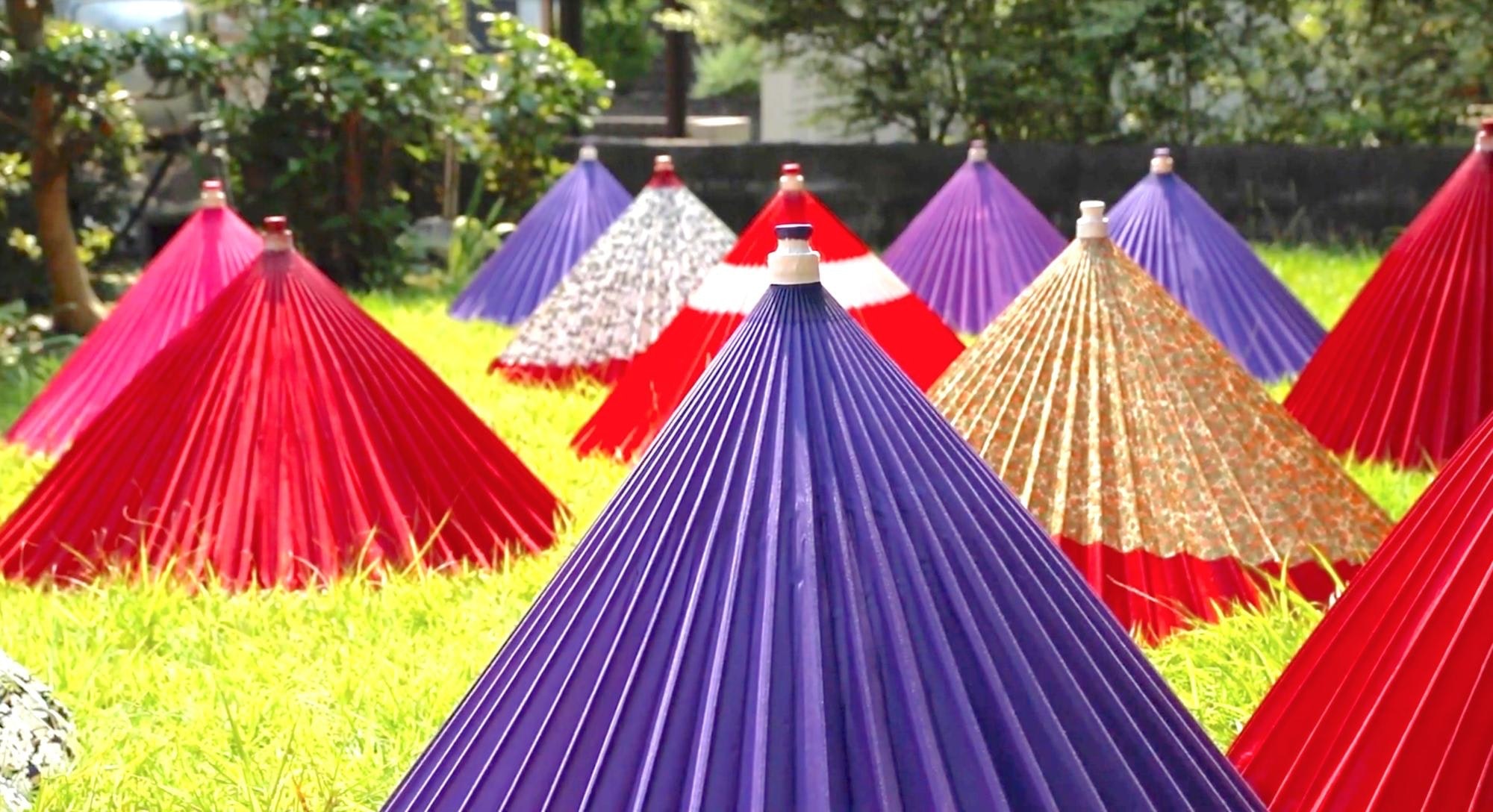 In this video [Express yourself, pass on the techniques – Gifu Wagasa]（心を伝え、技を承ぐ 〜岐阜和傘〜） we introduce to you one of the traditional Japanese crafts "Gifu Wagasa" through interviews with craftsmen who explain in detail their production process.
The traditional Japanese paper umbrella is made from bamboo and Japanese washi paper and is a very beautiful and photogenic work of art.
Gifu prefecture in the Tokai region of Japan is the largest producer of Japanese paper umbrellas in Japan.

At its peak, there were approximately 16,000 people involved in Japanese paper umbrella work in Gifu prefecture's Kanou region.
Currently, due to decrease in demand, there are only a few dozen people involved in the Japanese paper umbrella business, and they are under immense pressure to keep this tradition alive.
In this article, we would like to introduce to you (together with the accompanying video) the history and manufacturing process of the Gifu Wagasa.

The History of Gifu Wagasa

The Japanese paper umbrella dates back to the year 552AD, when umbrellas made from bamboo and paper called Karakasa were first produced.
The traditional Japanese paper umbrella was commonly used for hundreds of years. In 1950, approximately 14 million Japanese-style umbrellas were produced.
However, due to the spread and popularity of the Western-style umbrella, sales of Japanese-style umbrellas have dropped dramatically with only a few tens of thousands being produced in recent years.

That being said, traditional Japanese style umbrellas such as the Nodategasa and Bangasa are still being produced and so the culture remains to this day.
The photogenic appearance of the Gifu Wagasa makes it a wonderful souvenir or decoration and because of this, it has slowly begun to regain popularity.

How Are Gifu Wagasa Made?

Over ten craftsmen are involved in the production of a single Gifu Wagasa and they can take anywhere from half a month to a month to make. The manufacturing process is divided into six steps.
The first step, called Honekezuri, involves carving down bamboo to make ribs for the umbrella.
Followed by Rokurozukuri, which involves making a section called Rokuro from a specific tree called Ehretia acuminata.
After that, Ayatsurikomi, which slide into the Rokuro section, are made. Smaller bamboo ribs on the inner section of the umbrella called Kobone are tied together with string, a process which is called Tsunagi.
From 3:34 in the video, you can see the bamboo structure of the umbrella and from 5:46 you can see how Japanese washi paper is attached to the umbrella (a process which is called Kamihari ).
Finally, the umbrella receives the finishing touches, a process called "Shiage," which involves the application of oil, drying the umbrella in the sun, and then a final application of lacquer to complete the umbrella.

There are other areas of work which only craftsmen with specific skills can carry out, however there is the fear that the number of such craftsmen will decline in the coming years.
From 2:10 in the video, Masanori Haneda (a bamboo rib craftsman (竹骨師, takeboneshi)）speaks of how he became involved in making Gifu Wagasa.

From 4:17, Toyoko Hayakawa (who holds the title of Tsunagi-shi and Kagari-shi) talks during an interview of the low demand for Gifu Wagasa in recent years.
You can also watch interviews with several other craftsmen in this video.

Get Your Own Gifu Wagasa!

There are many specialty Gifu Wagasa shops in Gifu Prefecture, such as Nakamuraya Kasaten, where you can purchase your own Gifu Wagasa.
For those who are interested in purchasing their own Japanese paper umbrella, we recommend taking a trip to Gifu prefecture or checking out some of the online retailers where you can find Gifu Wagasa with beautiful artwork finishes.
There are even very affordable Gifu Wagasa that can be purchased for as little as a few thousand yen.

We hope you enjoyed learning about the Gifu Wagasa manufacturing process through the article and video.
A wide variety of craftsmen are involved in the making of Gifu Wagasa, from the rib-makers to the canopy-makers.
Recently, a project has been launched that aims to increase the number of Gifu Wagasa craftsmen in order to ensure this important traditional craft is passed on to the next generation.

For anyone who would like to experience using a traditional Japanese-style umbrella, we recommend purchasing one from one of the online sites where you can find a variety of styles, all beautifully designed by skilled and experienced craftsmen.