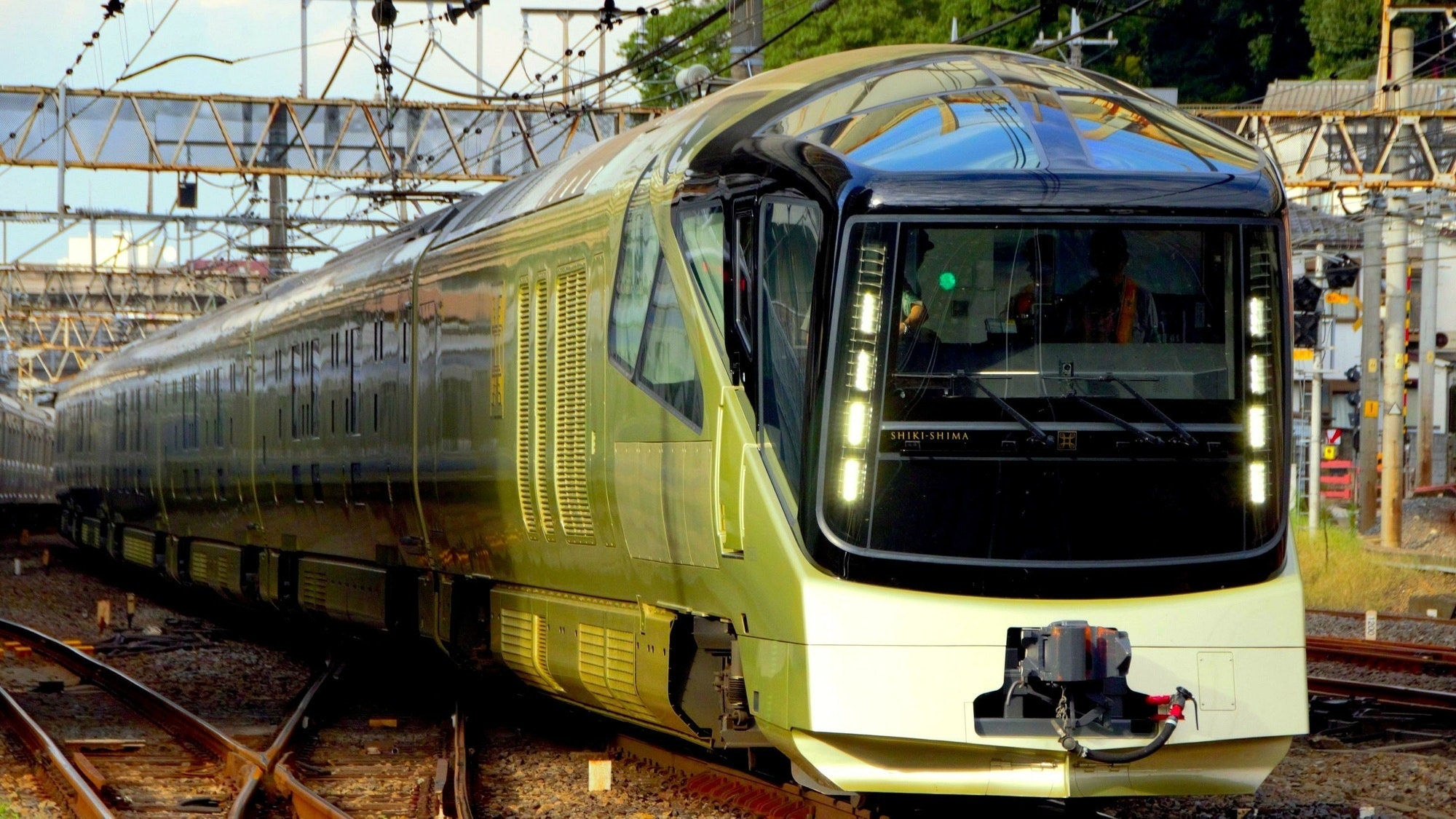 TRAIN SUITE Shikishima is a "cruise train" that departs and arrives at Ueno Station, which began service on May 1, 2017. The concept of the train is "深遊探訪" which roughly means "In Search of Fun."
In recognition of its stylish atmosphere, the Shikishima received the "Good Design Best 100" award.

What is Train Suite Shikishima?

The train is 10 cars long and, being that it's a luxury sleeper train, all of the furnishings in the guest rooms are top-notch. They focus on high-quality hospitality, with things like custom-made beech sofas, sunken kotatsu, and cypress baths.

There is also a lounge car and a dining car, and the entire train is barrier-free.
You can enjoy amazing views from the large window in the observation car.
The cars are the E001 series, which were made exclusively for this train, and the exterior paint is a specially formulated "Shikishima Gold."

The Rooms and Lounge on the Train Suite Shikishima

Cars 2, 3, 4, 8, and 9 on the Shikishima are suites, and Cars 1 and 10 are observation cars called VIEW TERRACE Kizashi and VIEW TERRACE Ibuki.
You can see the inside of the suite cars from 2:12 in the video.

Car 5, LOUNGE KOMOREBI, which can be seen from 0:53 in the video, is a lounge furnished with craftwork from Eastern Japan, reminiscent of trees and shrubs.
Car 6 is a dining room with a chandelier where you can enjoy a luxurious course meal.
Car 7 has a Shikishima suite and deluxe suite.

The Cost To Ride the Train Suite Shikishima

Train Suite Shikishima is a super-luxury train with rooms starting at ¥300,000 (~$3,000 USD) for 1 night.
Shikishima is kind of a hotel-type train that can be used like a package tour, thus the steep price.
Although most people won't have the chance to ride it, there are some events held and plastic models sold at the Railway Museum, so be sure to check these out as well.

Summary of the Train Suite Shikishima

Train Suite Shikishima, operated by JR East, is a luxury sleeper train that makes for an amazing ride.
Staying on the train is expensive, but it's popular and tickets sell out incredibly quickly.

The one-night course departs from Ueno, travels toward Koshu and Shinshu, and returns to Ueno.
There are also 2 night and 3 night courses as well.
The price for a 3 night course with a suite is ¥800,000 (~$8,000 USD).

Be sure to check out the JR East official website for more information about operating dates, routes, and timetables for Train Suite Shikishima.
Enjoy the feeling of luxury train travel through the video!