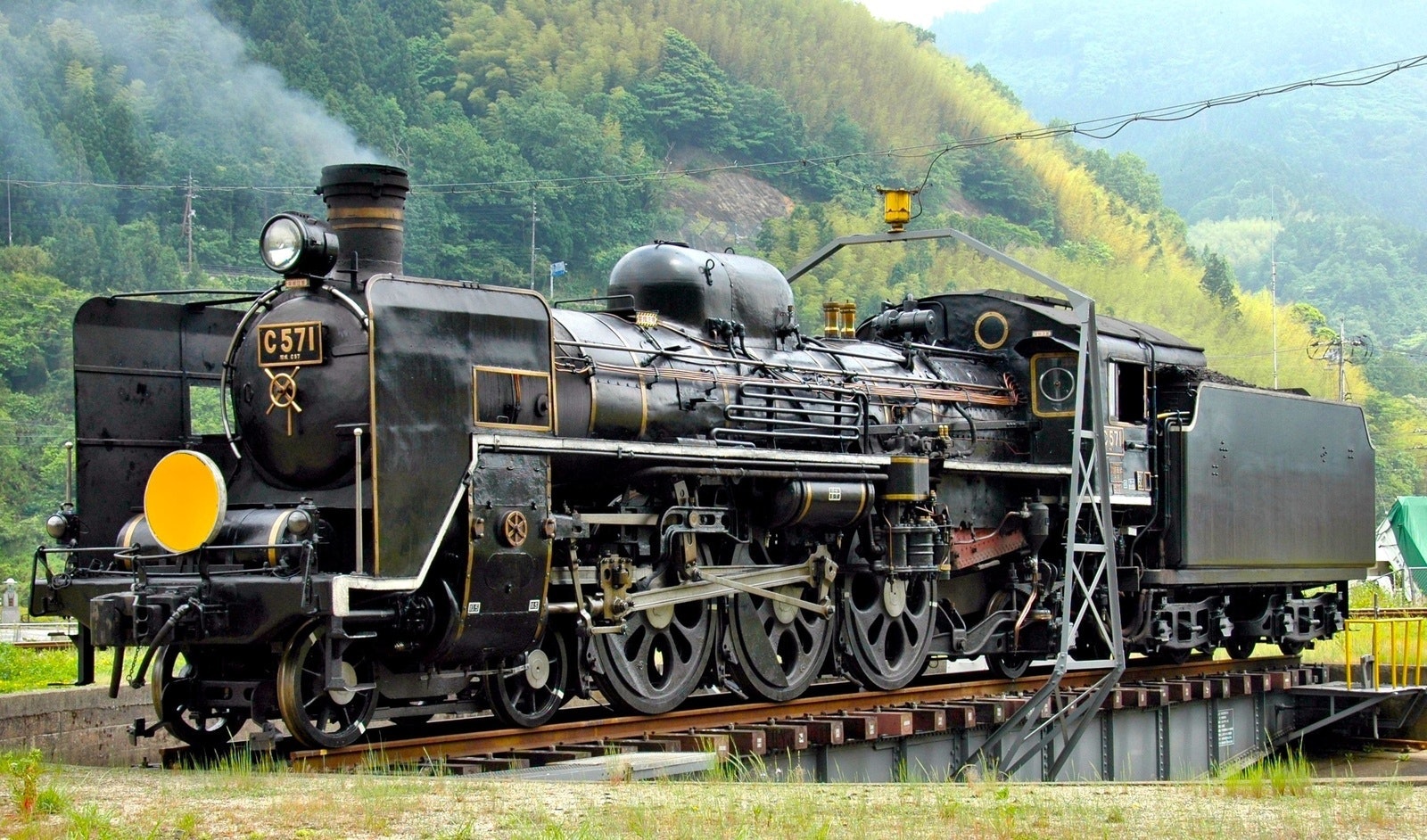 In 2019, SL Yamaguchi-go celebrated its 40th anniversary since its return. A commemorative event held at the relevant stations and in the train, attracted many fans.
The old-fashioned steam train chugging along with smoke coming out of its stack, its whistle, and the steam shooting out the side is spectacular to watch.
Enjoy the video of the retro-chic locomotive train.

About the Steam Locomotive, SL Yamaguchi-go

The steam train C571 was withdrawn from mainline service in 1965, but made a comeback in 1979 owing to the passionate requests from local enthusiasts and steam locomotive fans. As of November 2019, it runs between Shin-Yamaguchi and Tsuwano that takes about 2 hours and only runs on Saturdays, Sundays and national holidays.
This elegant machine is popularly known as "Lady".

Steam Locomotives are powered by a steam engine: The water contained in a boiler turns into steam when heated, and creates high pressure. Because of this, steam locomotives puff black smoke and big gray clouds of steam when they depart (seen in the video from 1:21).

The video shows the SL Yamaguchi-go running through the autumn landscapes in the area stretching between Yamaguchi city and Tsuwano.
Cosmos flowers swaying in the wind along the track present an astonishing coincidence of mixed colors, making a fine contrast with the black body of the steam train (from 6:25).

You can take beautiful pictures of the SL Yamaguchi-go when it crosses Tsuwano Bridge, or passes by Honmonmae Crossing, Nakaza Crossing, or Nayoshi District.
The impressive sight of the train making a turn on the railway turntable also offers a perfect photo opportunity.
The SL Yamaguchi-go typically pulls 5 coaches, but occasionally gets double-headed with another steam locomotive, D51200 (Degoichi)

Travel Information for Hagi & Tsuwano With the SL Yamaguchi-Go

Some popular local dishes in the area are: "Uzume-meshi" (a type of Japanese pilaf using wasabi), "Imoni" (Taro cooked in broth), "Oshizushi" (A variant of Sushi loosely translated as "Pressed Sushi"), "Kuro Inarizushi" (A type of Inarizushi), and Genjimaki or Emikomaki (types of Japanese confections. Emikomaki is a smaller variant of Genjimaki).

There are a wide range of souvenir collections dedicated to the SL Yamaguchi such as washi paper masking tapes whose design depicts the landmarks and attractions of the cities along the railroad, Choro-Q (miniature train cars manufactured by the Japanese toy maker "Takara Tommy") with a realistic license plate and head-sign and N gauge locomotives.
There are also plenty of food and beverage souvenirs such as apple juice, apple jam, or sweets including Ogori Manjyu, Uiro and Genjimaki.

Photo：Car window from the SL Yamaguchi

The SL Yamaguchi-go stops at stations including Shin-Yamaguchi, Yudaonsen and Tsuwano.
Travelers are able to purchase their ticket at any JR station or make online reservations as well.

There are 3 types of tickets: ordinary, green car (Japanese trains equivalent to first class), or observation cars.
The Japan Rail Pass is valid on the SL Yamaguchi-go.
There are also some sightseeing tours which include riding the steam train.
You can check the timetable on the official site.

Summary of the SL Yamaguchi-Go

Seeing SL Yamaguchi-go roaring down the track is a Heaven for railfans.

If you feel like having a steam locomotive experience in Japan, it's easy to make those dreams a reality. Be sure to reserve your seat online.
Fares and timetables are displayed on the official site.