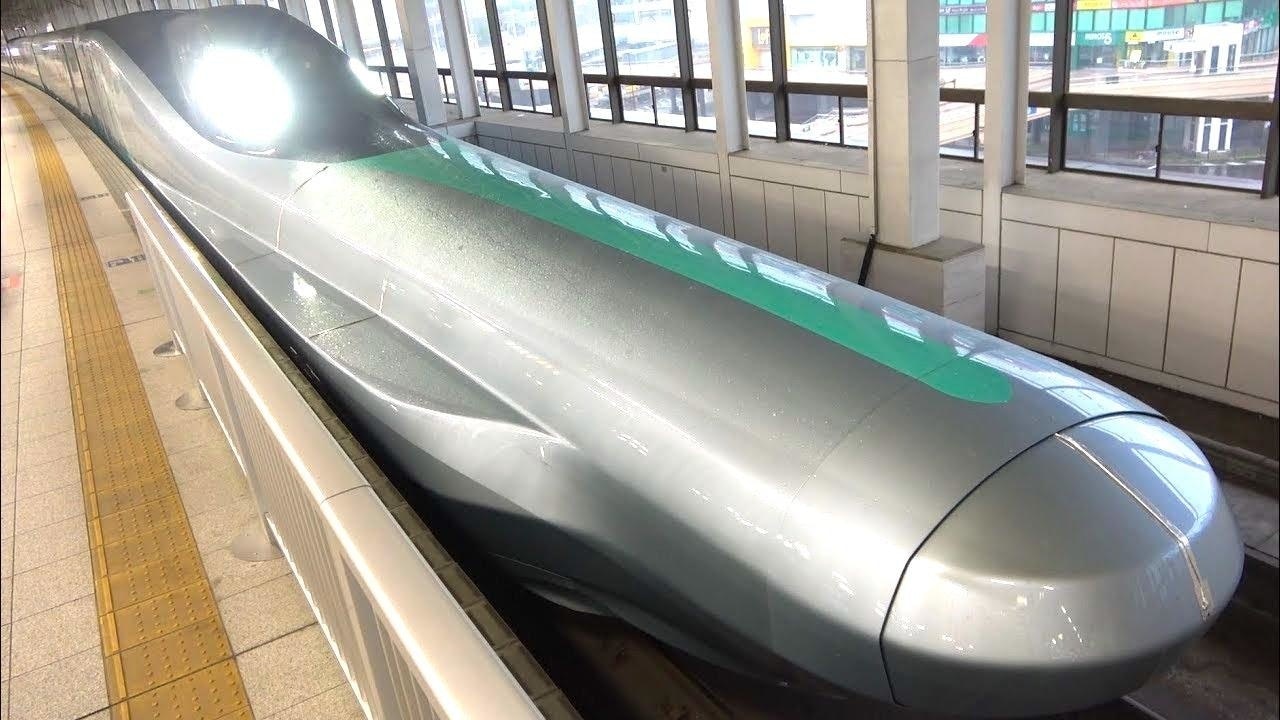 The new model of pantograph (a piece of equipment mounted on the roof of an electric train) goes up and down (from 1:15 in the video).
The car departs and arrives in the video.
Train spotters can’t resist it.
This article explains the test car “Shinkansen ALFA-X.
Please enjoy ALFA-X's futuristic design.

The test car, E956 series Shinkansen ALFA-X is a JR Tohoku Shinkansen, developed for commercial operation with a top speed of 360 km per hour.
A test run at 400 km/h is also scheduled.
The 10-car ALFA-X has different front designs between the first car and the tenth car as they were manufactured by different companies.

Kawasaki Heavy Industries is in charge of the first car. The length is about the same as the E5 series. It aims to reduce pressure waves when traveling through a tunnel and at the same time keep the pressure inside of cars.
Hitachi Manufacturing made the tenth car. Its feature is that its longer than the E5 series.
It also reduces pressure waves and tries to improve environmental performance.
The long nosed front car keeping down air pressure can fully be enjoyed from 3:25.

The orange tail lamps in front of the window are design accents.
The design of Shinkansen ALFA-X feels futuristic.
The characteristic silver metallic color and light green lines look fast.
It is shown at 0:02 through the end of the video.

Operation is scheduled on Tuesday and Saturday between May in 2019 (Reiwa 1) and March in 2022, about 70 days in a year.
On the first day of the operation, it was presented to reporters at the Shinkansen rolling stock base in Rifu cho in Miyagi Prefecture.
ALFA-X is earthquake-proof and designed to reduce the swaying of cars.
The eighth car, which is Grand Class, offers a luxurious train ride.

The test car “Shinkansen ALFA-X” which runs at a top speed of 360 km/h is gaining a lot of attention from overseas.

There are various reactions to the fastest train ever made. People sharing that they are envious and would like one to be created in their country and so on, is not uncommon.
The distinctive design of ALFA-X is also popular.

The toy Shinkalion ALFA-X modeled after the test car ALFA-X is also available, gaining more and more recognition.
We recommend the ALFA-X Plarail or N gauge model trains as souvenirs.

It is so exciting to imagine traveling Japan in such a cool train in just a few years' time.