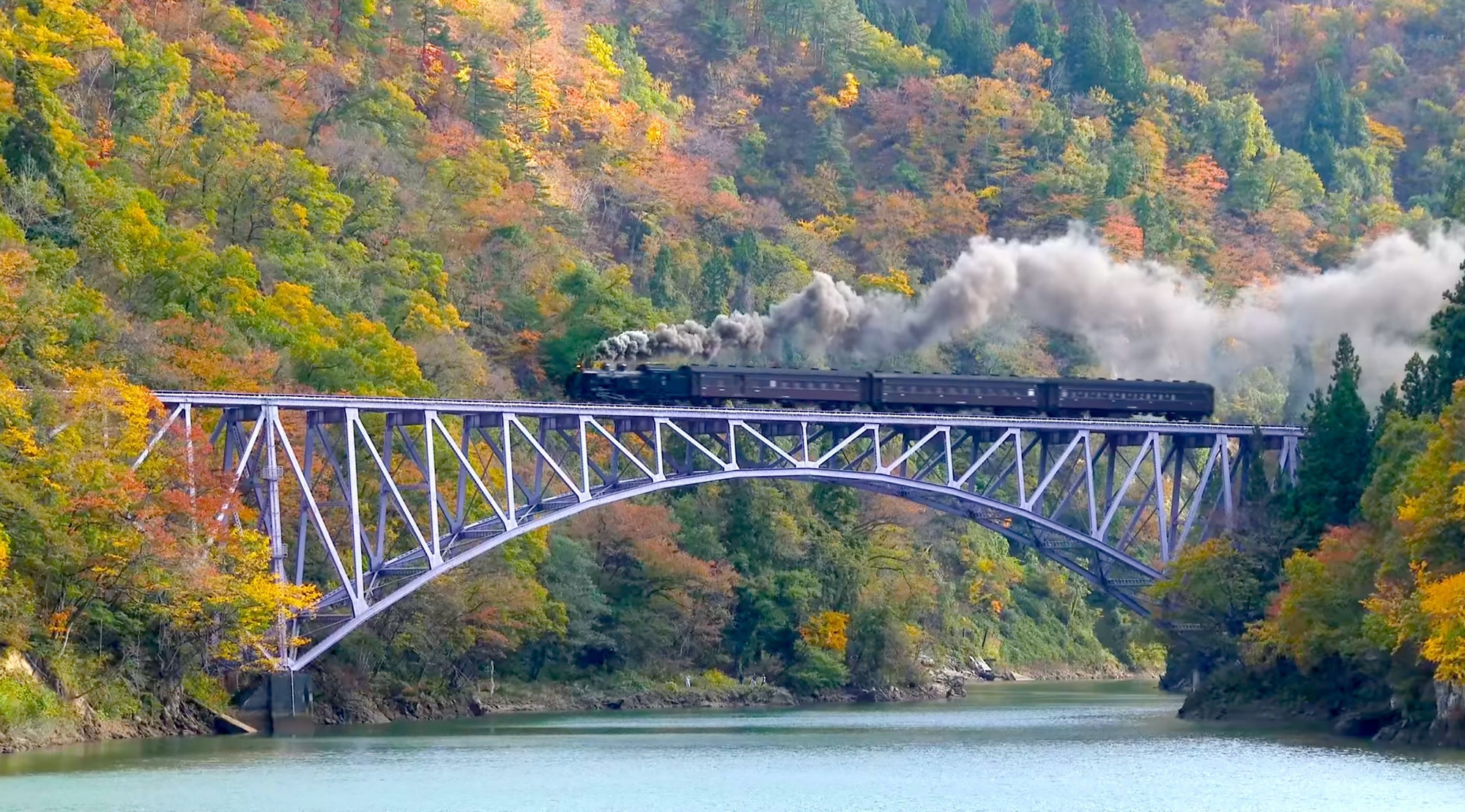 This video, titled "[4K] Tadami Line "Koyo-go 2015" - Journey Through Japan by Train - A Spectacular View of a Steam Locomotive," (【4K】只見線「紅葉号2015」〜日本の鉄道旅 絶景SL」) was released by "beaphoto1."
The Tadami Line runs along a ravine from Aizuwakamatsu Station in Fukushima Prefecture (福島県) to Koide Station in Niigata Prefecture (新潟県).
It's a popular line among railroad enthusiasts and tourists for its spectacular scenery.

The Tadami Line is a local line with a reputation for enjoyable train travel.
This video features the SL (steam locomotive) Aizu-Tadami Koyo-go, one of the most popular trains on the line.

The Tadami Line is a 135.2 km long line belonging to East Japan Railways (JR East) and connects Fukushima and Niigata prefectures along the valleys of the Aburuma (破間川) and Tadami Rivers (只見川).
The Tadami line runs through one of the most mountainous areas in Japan, so the scenery from the train windows is incredibly beautiful and it's very popular among travel lovers.
With fresh greenery in the spring, autumn leaves in the fall, and snowy scenery in the winter, you can enjoy the scenery from the train windows all year round on the Tadami Line.
As the train runs along a canyon, there are many railway bridges.
Among them, the "No. 1 Tadami River Bridge," which can be seen from 0:03 in the video, is a popular spot for photographing the beautiful SL Aizu-Tadami Koyo-go.
The "No. 1 Tadami River Bridge," which frequently appears in the video, was completed in 1938 as a truss arch bridge.

In a survey by The Nikkei on October 11, 2008, the Tadami Line was ranked first in the NIKKEI PLUS1 "Top Ten Railway Lines with Beautiful Fall Foliage."
You can see the scenery of the steam locomotive Aizu-Tadami Koyo-go running on the No. 1 Tadami River Bridge at 0:10 and 1:18 in the video.

When the steam locomotive is not in operation, there is also a trolley train called the Kaisoku Kazakko Tadami Line Koyo-go.
This is another train we highly recommend riding if you have the chance.
The Tadami Line is famous as an "unexplored line," and what better way to experience it than traveling through it on a steam locomotive?

The SL Aizu-Tadami Koyo-go starts at Aizuwakamatsu Station in Fukushima Prefecture.
This is the center of Aizu tourism, and is home to the famous Higashiyama Onsen (hot springs).

There are many other onsen inns along the route, so we recommend staying at one to relax for an evening.
We recommend enjoying Fukushima's famous horse sashimi, Aizu-Jidori chicken, and the mushroom dishes in autumn when staying at one of the local hot spring inns.

We hope that after watching this video you're thinking about enjoying a train ride to see the beautiful autumn foliage of Aizu!
Aizu is a tourist destination with different scenery in each of the four seasons.
Enjoy a trip to Aizu on the scenic Tadami Line's SL Aizu Tadami Koyo-go, and enjoy Aizu - a great place for taking Instagram photos!