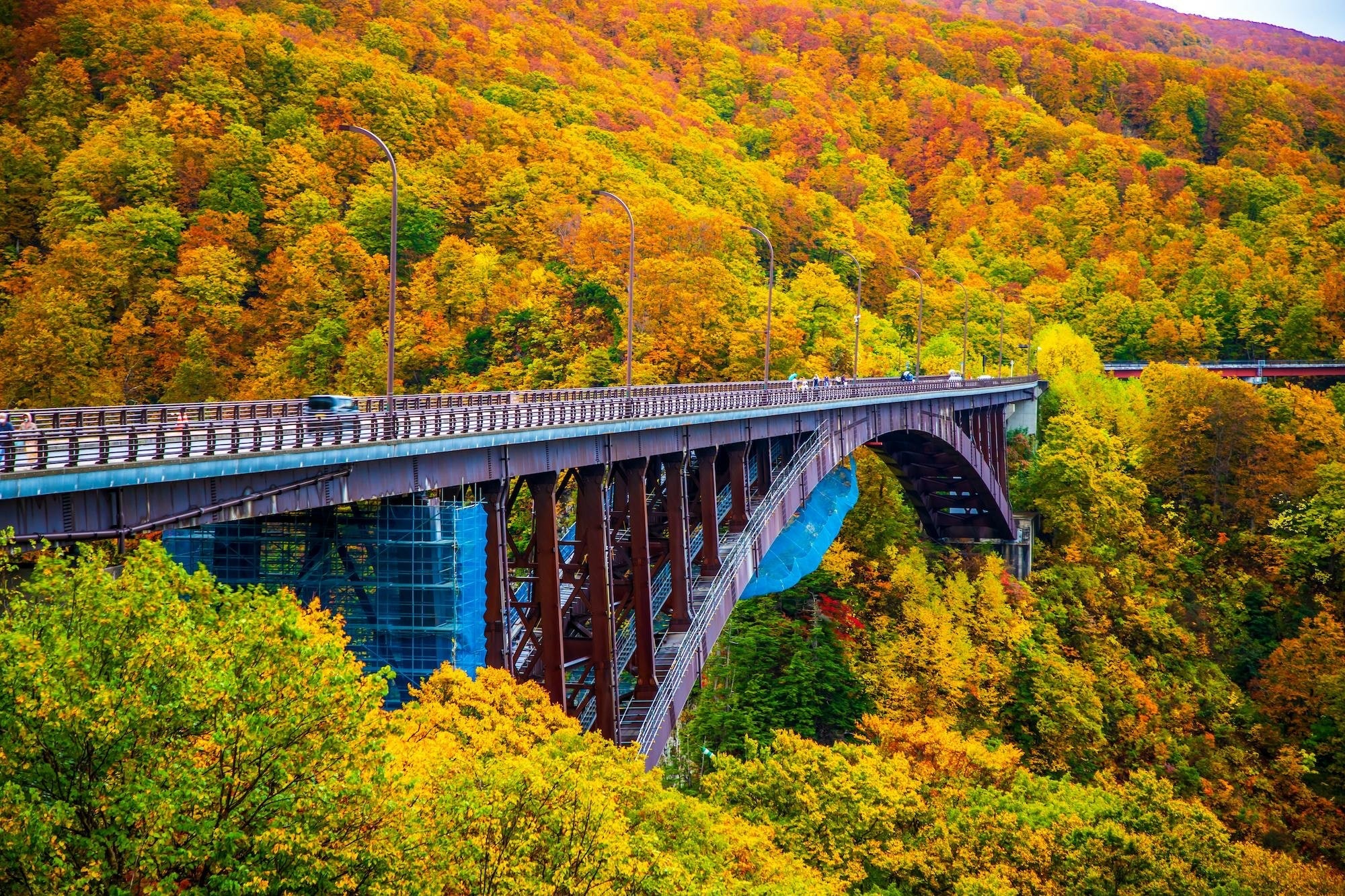 Jogakura Bridge – Facts About the Beautiful Bridge in Aomori, Japan

Jogakura Bridge is located in Towada-Hachimantai National Park in Aomori, in Japan's Tohoku region. National Route 394 connects the Tsugaru and Nanbu regions of Aomori Prefecture, and in October 1995, Jogakura Bridge was built over Jogakura Gorge, which had been a major obstacle previously. Needless to say, a great deal of effort was put into building the bridge, and many people worked hard to make it possible.

Jogakura Bridge is 360 meters long, with an arch span length measuring 255 meters. It is the longest deck arch bridge in Japan, which have their deck is completely above the arch. The arch span length is the length of the bridge between the piers (the main span).
The height from the valley floor is 122 meters! The view of the Hakkoda Mountains from the bridge is truly spectacular.

The Best Time to View Autumn Leaves at Jogakura Bridge

There are parking lots and restrooms at both ends of the bridge. From the observation space on the Kuroiwa side of the parking lot, visitors can take pictures of the arch bridge against the backdrop of autumn leaves.
You can walk across the bridge's walkway and take your time snapping photos while viewing the autumn leaves. You can see tourists doing this throughout the video as well. Because it's filmed via drone, you can also see just how large and tall the bridge actually is.
[Video] 1:25 - Tourists Walking Across the Bridge, Enjoying the Autumn Leaves

Hot Springs, Ropeways, and Other Popular Attractions Around Jogakura Bridge

●Sukayu Onsen
This hot spring has been known as a therapeutic bath since the Edo period (1603-1868 A.D.). "Hiba Senninburo," a large, 290 square meter mixed bathing area constructed entirely of hiba (cypress), is what makes this hot spring so special. The retro atmosphere is also popular.

●The Hakkoda Ropeway
Located in the northern part of Towada-Hachimantai National Park, the ropeway connects the base station and the summit park station via a 10-minute gondola ride, offering spectacular seasonal views, such as autumn leaves in the fall and ice-covered trees in winter. From the ropeway station, a walking trail is available where visitors can enjoy a 30-60-minute stroll.

●Jigoku-numa Pond
A swamp created as a result of the former volcanic activity of the Hakkoda Mountains, located not far from Sukayu Onsen Hot Spring. Even today, sulfur-containing gases spew forth from the surrounding fumaroles, and highly acidic, 90-degree Celsius water gushes into the pond.

Jogakura Bridge, built in a harsh natural environment high in the air, features a spectacular panoramic view. Did you get a chance to check out the beautiful autumn leaves in the video? In addition to the autumn foliage, winter, spring, and summer are also beautiful, so if you get the chance, we definitely recommend visiting during these seasons as well.

There is also a well-known soba restaurant near Jogakura Bridge. Some serve tempura made with vegetables grown in the surrounding mountains with soba, while others even have tempura apples, a specialty of Aomori Prefecture, and others even have soba pudding!
Enjoy the vast nature of Towada-Hachimantai National Park while also enjoying some delicious local food!

たまいゆき子（Yukiko Tamai）
Sometimes I suddenly feel the urge to try something new. Right now I'm trying my hand at being a wri
SUBSCRIBE