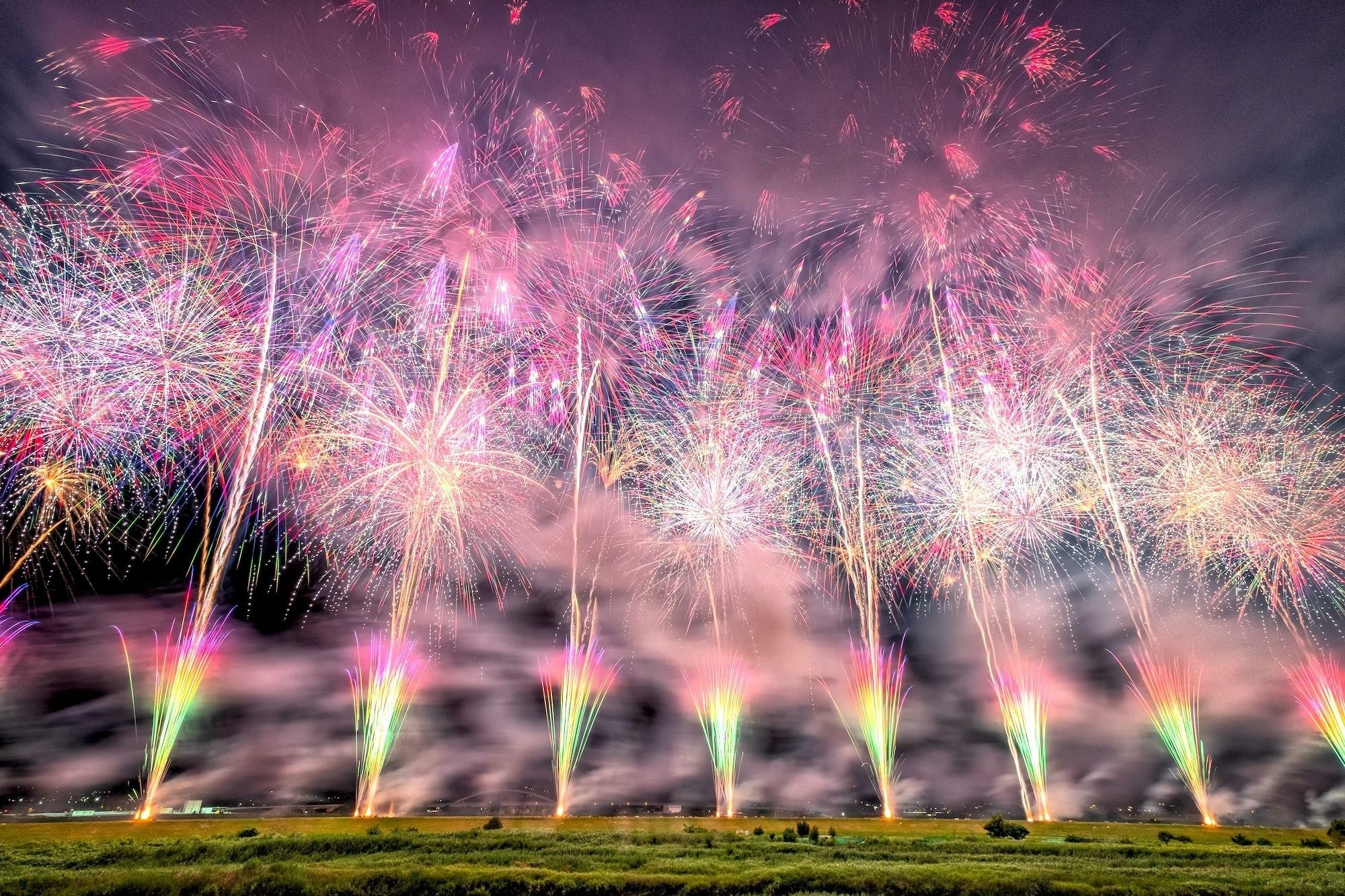 About the Shinmei Fireworks Festival

The Ichikawamisato Furusato Summer Festival, known as 'Shinmei Fireworks,' the largest of its kind in Yamanashi Prefecture, is a fireworks display with rich tradition and history.

The video provides an authentic view of the grand finale for the 31st Shinmei Fireworks Festival in 2019. Held on the banks of the Fuefuki River in Ichikawamisato, Yamanashi, in Japan's Koshin'etsu Region, a total of 20,000 colorful fireworks, including massive mortars, colored the night sky.

Unfortunately, the 32nd event was cancelled due to the novel coronavirus. Last year, the 33rd Shinmei Fireworks Festival was held with a shortened time frame and no spectators, and the Executive Committee surprised the audience by offering a live broadcast of the fireworks with a themed fireworks display.

The 34th Shinmei Fireworks Festival in 2022 will be held despite the coronavirus pandemic, and will be held while taking measures to prevent the spread of the virus. The event will start at 7:15 p.m. on August 7, 2022, the day of the fireworks.

The History of the Shinmei Fireworks Festival

The origin of the Shinmei Fireworks Festival dates back to Japan's Warring States Period, when the famous warlord Takeda Shingen sent up smoke signals in battle.

It is said that the exact location where the Shinmei Fireworks Festival originated is a shrine dedicated to Jinzaemon, who introduced paper-making techniques to the people during Japan's Heian period (794-1185), thereby enriching the lives of the people. The town also prospered as a washi (traditional Japanese paper) production center, and 'Ichikawa Washi' became an essential part of fireworks making.
During the Edo period (1603-1867), Ichikawa Hanabi was one of the three most famous fireworks in Japan, and the town became known for its fireworks because of this.

It's said that about half of the fireworks makers in Yamanashi Prefecture were located in Ichikawa, and there was a time when about 10% of the households in the town were involved in making fireworks. Local pyrotechnicians are in charge of launching fireworks in the town dubbed 'Fireworks Town.'
Saikienka Honten and Marugoh, which have won awards throughout Japan, will create a spectacular fireworks show with music and colorful fireworks. The Shinmei Fireworks Festival is a spectacular display of fireworks, which are greatly affected by the weather, wind, and wind direction, but are so artistically and beautifully presented here.

A Moving Performance of Music and Colorful Fireworks

The exquisite programming of the starmine by MARUGOH Fireworks, which delivered a knockout sensation in the grand finale, was a showstopper, with many people being blown away by the awesome display.

The rainbow-colored fireworks moved to the music as if they were living creatures, making it feel like watching a musical. While vivid colors are mainstream for Japanese fireworks, pastel colors such as pale light blue and lemon yellow gracefully danced in the jet-black night sky.

Summary of the Shinmei Fireworks Festival