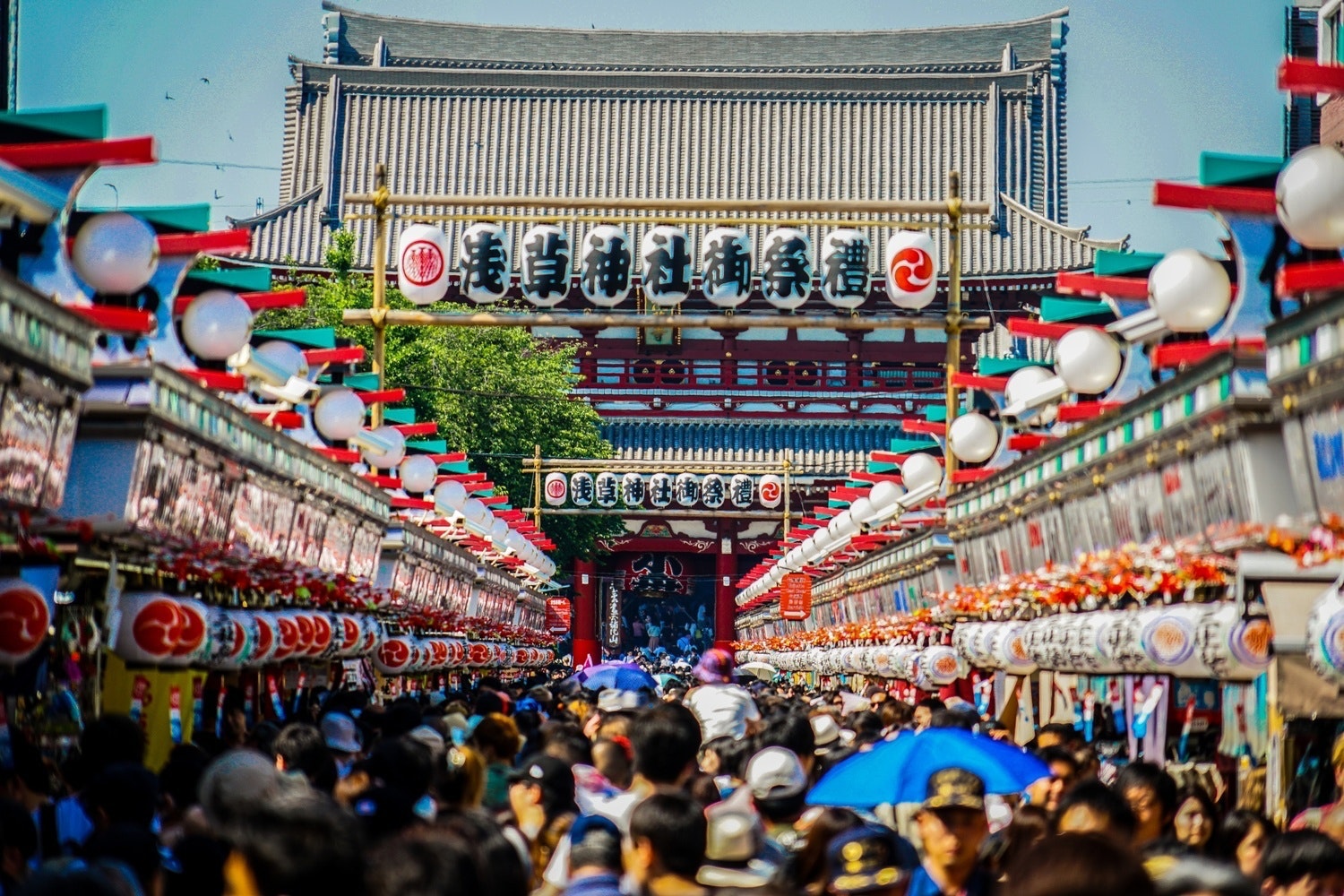 Sanja Matsuri in the Old Town Asakusa; The Tradition of Early Summer in Japan

Sanja Matsuri is held in the old town Asakusa during the 3rd week of May, every year, from Friday to Sunday.
Throughout the three days of this event, more than 1.5 million people visit the festival!
Japan has been gaining popularity due to the Tokyo Olympics in 2020, and now Sanja Matsuri is one of the very popular events representing Tokyo and Japan.
In this video, Mr. Hamasaki from the Kaminarimon West Community Association explains the charms of Sanja Matsuri.
Its highlights and history are especially interesting!
After watching this video you'll definitely want to check it out! Be sure to follow along with the video as you read the article!

The first day of Sanja Matsuri starts with “Daigyoretsu Parade.”
Beginning with a float accompanied by music, a line of chic Edokko (people born and raised in Edo), dressed as geisha and egrets, parade along the routes in each town of Asakusa.
You can see this scene from 2:14 in the video.

You especially don't want to miss the “Binzasara Dance,” the dance of rice planting.
“Binzasara” is a traditional music instrumental made of 108 thin layers of Japanese cypress boards.
Here, participants pray for a good harvest by dancing with the sound of Binzasara.

The Binzasara Dance is also designated as an important intangible folk-cultural property of Tokyo; It is a special event you can see only at this festival.
After that, the ceremony of transferring the Omi-Tama to the shrine of each town council, is held.

On the 2nd day of Asakusa Sanja Matsuri, the event called "Mikoshi Togyo" is held by the 44 parishioners of Asakusa.
A mikoshi is a portable shrine on which a god or a spirit rides during festivals.

In the afternoon, approximately 100 “Portable Town Shrines (町内神輿, Chonai Mikoshi)” owned by 44 towns of Asakusa undergo a purification ceremony at Asakusa Shrine one by one.
Then, Edokko carry Mikoshi together and walk around the town energetically.
All the portable shrines are put behind the main hall of Sensoji Temple, so it is a very good spot to take some photos.
It's definitely worth seeing the view of the 100 portable shrines. You can take some great pictures here as well!
You can see this scene from 4:32 in the video.
In the video, Mr. Hamasaki says that the events held on the 2nd day are practice for carrying the portable shrines on the following day.
He also says that there are no rules for shouts; As long as everyone enjoys carrying the shrines, it's fine.
Usually the area around Kaminarimon Gate is full of tourists. During the festival, however, many Edokko gather in this area to carry portable shrines.
You can see some great scenes from 9:30 in the video.
After that, you can see the female shrine maidens’ dance performance at Kagura Hall (神楽殿, Kaguraden).

However, Miyadashi, carrying Mikoshi out of the shrine, starts at 6 a.m. Moreover, people are not allowed to go inside Asakusa Shrine during this time.
If you want to watch this scene with the best possible view, we recommend staying at a hotel in the area the day before the event.
At 12:58 in the video, Mr. Hamasaki says that it is fun for visitors to watch Mikoshi Togyo because it is a participation type festival that is very close to the audience.
On the same day, you can also see the ceremony of spirits returning from portable shrines, female attendants dancing, and the dance offering accompanied by a Japanese drum performance.

Don’t forget the food stalls at the festival!
Enjoying street food is another fun part of Sanja Matsuri.
Asakusa is famous for many kinds of delicious local food, such as Monja, Sukiyaki, and Unagi eels.
Enjoy the sounds and flavors of Sanja Matsuri!

Asakusa Sanja Matsuri is one of the three main festivals in Japan. In recent years, collecting the Goshuin (red seals) at temples and shrines has become popular. In addition, many temples and shrines are now popular among Instagrammers, which is why a large number of visitors come to Asakusa Shrine throughout the year.

During the three days of this festival, Asakusa Shrine and the old town of Asakusa become full of the excitement of Edokko!
Sanja Matsuri, a historical and traditional festival in Asakusa, now attracts people all around the world.

This 18-minute video shows some highlights of Sanja Matsuri, including the powerful ceremony of transferring the spirits to portable shrines.
Mr. Hamasaki introduces some must-see points of the festival, so be sure to check them out! Enjoy Sanja Matsuri, the historical festival in Asakusa!

During the festival, traffic is very crowded due to traffic restrictions.
The parking lots around the shrine can also not be used, so when you visit Sanja Matsuri, we highly recommend using public transportation.

◆Information of Asakusa Shrine◆
【Address】2-3-1 Asakusa, Taito-ku, Tokyo 111-0032 JAPAN Seven-minute walk from Asakusa Station (Ginza Line/Asakusa Line)
【Parking】There are some parking lots. You cannot park your car if you are only visiting the shrine.
【Phone Number】03-3844-1575