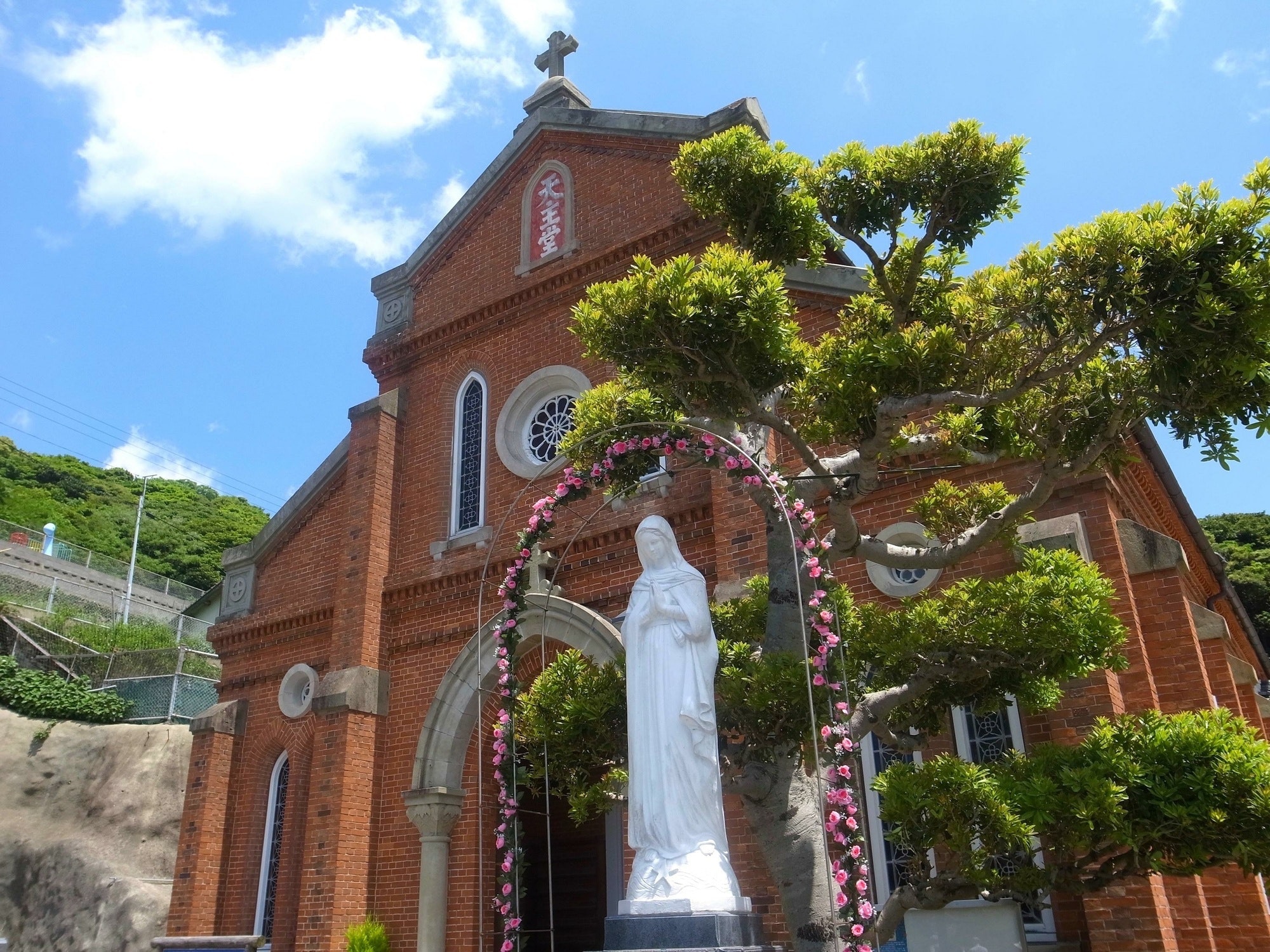 The Goto Islands and Churches in Nagasaki

With a population of about 70,000, the Goto Islands of Nagasaki are located about 100 km west of Nagasaki Prefecture, at the edge of Japan's Kyushu region.
They consist of 152 islands, both large and small, stretching 80 km in all different directions.
The Goto Islands were registered as a UNESCO World Heritage Site (cultural heritage) in 2018, and are a popular tourist destination that attracts tourists from all over Japan.

Enjoy the powerful drone shots of churches, natural landscapes, and the beautiful sea of the Goto Islands in Nagasaki Prefecture!
The emerald green sea is enough to get you in the mood for a road trip!

The history of Christianity on Nagasaki's Goto Islands began in 1566 with the arrival of Luis de Almeida and his group of missionaries to the island.
Their missionary work led to the construction of many churches in the Goto Islands.

During the Edo Period (1603-1868 A.D.), Christians were persecuted by the Tokugawa Shogunate in an effort to maintain the security of the country; 51 Catholic churches still remain to this day.
The Christian Cave, Fukumi Catholic Church, Nakanoura Church, Kashigarashima Church, and Aosagaura Church are all fantastic spots we recommend checking out.
The scenery of the historic churches is sure to be a great spot for your Instagram.

The Goto Islands Have a Lot More To Offer Besides Beautiful Churches!

The Goto Islands in Nagasaki are thought to have been inhabited since the Paleolithic Period, and traces of human life have been discovered in Jomon (14,000 BC to 400 BC) and Yayoi (300 BC to 250 AD) period ruins.
There's more to the islands than just churches!
When traveling to the Goto Islands, we recommend booking an island tour.

This video shows the Goto Islands in Nagasaki surrounded by nature, including Fukue Island (福江島) from 0:12, Hisaka Island (久賀島) from 0:52, Naru Island (奈留島, Narushima) from 1:08, and Nakadori Island (中通島) from 1:27.
All of these islands are covered in natural landscapes for you to enjoy!
There are many repeat visitors who come here for fishing and sightseeing.
If you want to go swimming, we recommend beaches such as Takahama Beach, Hamagurihama Beach, Miyanohama Beach, and Hinoshima Beach.

Also, everybody knows that when you're traveling, you've got to try the local food!
The Goto Islands' specialties include Goto Udon noodles made with agodashi (seaweed soup stock), barley shochu (distilled spirits made from barley), Karasumi (dried mullet roe), and Diamond Salt.
Don't forget to try the delicious seafood dishes made from locally caught fish as well!

Summary of the Goto Islands and Churches in Nagasaki Prefecture

In order to visit these beautiful churches, Nagasaki's Goto Islands can be accessed by ferry and airplane.
Ferries to Fukue Port are available from Nagasaki and Hakata ports.
If you plan to go to other islands, such as Hisaka Island, Naru Island, Nakadori Island, or Ojika Island, you will need to transfer from Fukue Port.

Another option is to fly to Fukue Airport from Nagasaki and Fukuoka airports.
Touring around the island is mainly done by bus, so we recommend taking a tour that includes a hotel and other services in a package.
I bet after watching the video you're already packing your bags for the Goto Islands!
We hope you have a great trip and enjoy your time in Nagasaki!