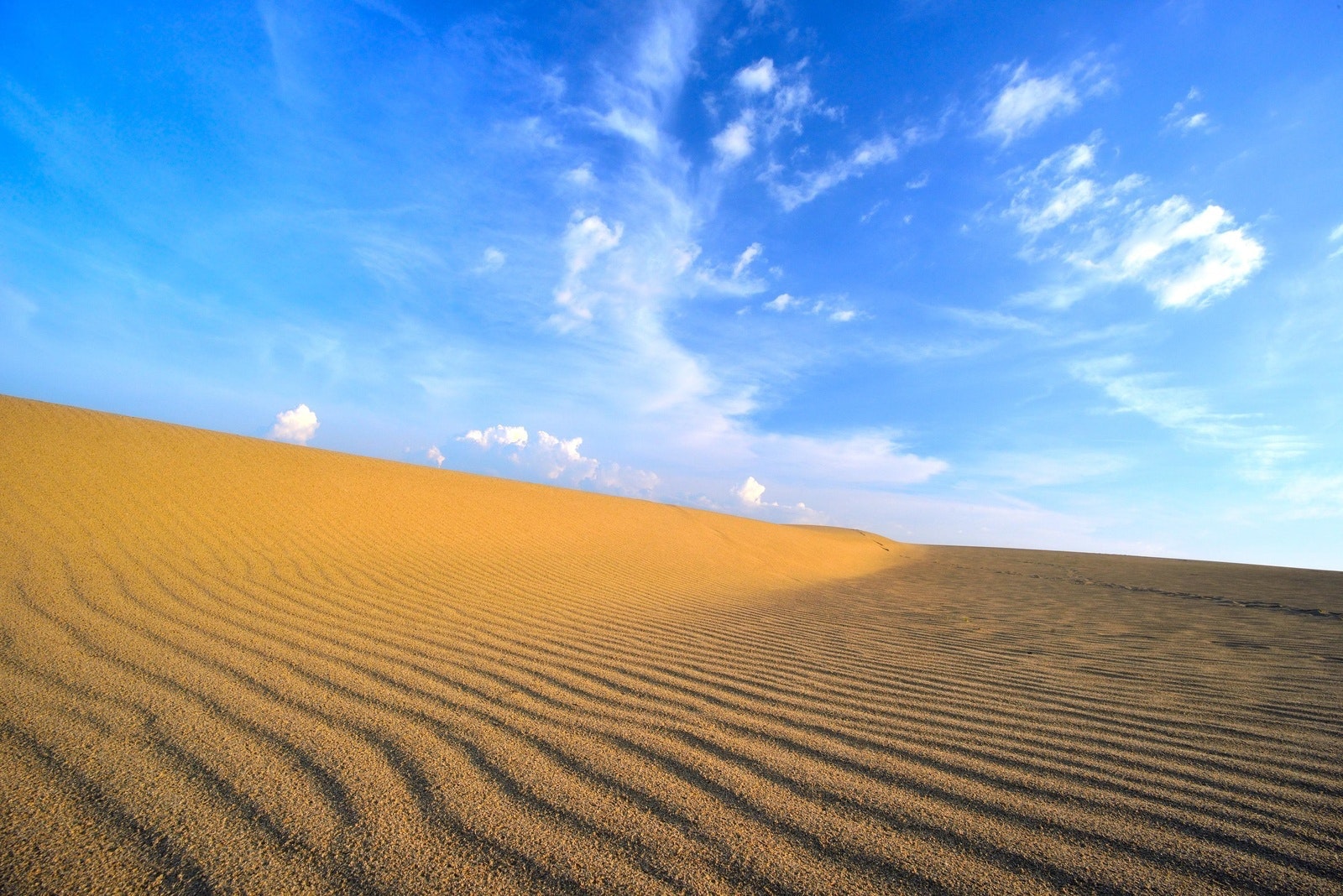 About the San’in region promotion video

Popular destinations in the region are: Lake Shinji, the Tottori Sand Dunes, Matsue Castle, Mt. Daisen, and Izumo-taisha. There's also nature, historic buildings, and local seafood dishes.
All of this is condensed into the 3-minute video of San'in.
Sit back, relax, and enjoy a look at Japan's San'in region.

Photo：Camel in the tottori sand dunes

The Tottori Sand Dunes in Tottori Prefecture, the largest in Japan, are a popular tourist attraction in the San'in Region, and are the only sand dunes in Japan designated as a natural monument.
Japan’s amazing desert-like Tottori Sand Dunes has a 90-meter difference in elevation, and visitors can enjoy beautiful views of the Sea of Japan from atop them, as well as the wind-wrought pattern, known as Fumon, on the surface of sand. There's also a beautiful sunset at the Tottori Dunes.
You can see the Tottori Sand Dunes from 0:06 in the video.
It's the only place in Japan where you'll find sand in every direction.
The dunes also attract Instagrammers looking for photogenic scenery.

The Oki Islands in Shimane Prefecture consists of 4 inhabited islands and a dozen uninhabited islands.
Due to their geological heritage, the Oki Islands have been designated a UNESCO Global Geopark.
When you set foot in Oki, you'll encounter a deep forest, home to Chichi-sugi, a mysterious 800-year old Japanese cedar tree, the coasts of Shirashima, and Jodogaura.
The Oki Islands appear at 0:21 in the video.

Next is Tachikuekyo, a narrow gorge with a beautiful suspension bridge and spires of uniquely-shaped rocks rising high into the air.
It's a great place to visit because of its five hundred Arhat statues and Reikoji temple.

The next spot introduced in the video is “Uradome coast” in Tottori. A beautiful ria coastline surrounded by the clear, rough waters of the Sea of Japan.
Mt. Daisen shown in the video from 1:21, is the highest mountain in Japan's Chugoku Region.
It's shape changes vastly depending on which side of the mountain you are standing on, and also changes its color depending on the season. The beautifully autumn foliage is a sight to behold.
The view of Sakasa Daisen, a view of Mt. Daisen together with the upside down Mt. Daisen reflecting off the water's surface, is also a popular tourist attraction.

Nariishi Beach in Kotoura has stones that have been rounded off by the rough waves, and that rattle as the waves roll in.
The beach is shown at 1:34 in the video.

At Tottori’s Sakaiminato port, one of the largest landings of queen crabs in Japan, queen crabs start being caught while it's still dark.
You can eat fresh seafood in the fish market as shown in the video at1:46.

Sakaiminato is also known as the home of Mizuki Shigeru, creator of the famous cartoon series "Gegege no Kitaro."
Mizuki Shigeru Road, a street dedicated to all the yokai characters that appear in his stories, attracts many visitors as well.
If you're stopping by the area, don't forget to try Izumo Soba. It's to die for!

Iwami Kagura, a Japanese heritage that has been handed down in Shimane Prefecture since ancient times, is a fantastic representation of the world of mythology.
It has events all year round as well so be sure to check it out.
This can be seen at 1:52 in the video.
It's a great way to familiarize yourself with traditional Japanese culture.

In the Izumo region of Tottori Prefecture, there's a history of Tatara iron manufacturing.
The Okuizumo Tatara Sword Museum is a great place to visit to learn about old iron making technology.
You can also see a sword forging demonstration as well.

The Nakai Pottery of Inshu, Tottori Prefecture, another traditional handicraft, is introduced at 2:28 in the video.

The next spot shown in the video is Miho Shrine in Shimane.
This solemn shrine is dedicated to Ebisu (the Japanese god of fishermen).

The beautiful Matsue Castle, also known as Chidori Castle, is one of the few remaining castles from the Edo period in Japan, and is known as a spot where you can see the entire city of Matsue from the castle tower.
The castle can be seen at 2:48 in the video.
It's a must-visit destination for history lovers.
Shimane also features one of the most ancient and important Shinto shrines, "Izumo Taisha."
Its shimenawa (a rope used to cordon off consecrated areas) triumphs as the largest in Japan.
It's believed that Izumo Shrine enshrines a matchmaking deity, and is a famous power spot.

At the Adachi Museum of Art, you can enjoy Japanese paintings and ceramic works by masters from modern to contemporary times.
The 50,000-square-meter Japanese garden is so beautiful that it was ranked number one on the list of best Japanese gardens.
It consists of 6 beautiful gardens, such as the "White Gravel and Pine Garden," the "Moss Garden," and more.

In Yonago, Tottori, dozens of jizo statues (statues of Buddhist deities) are lined up along the Kamogawa riverside.
One of the main events at the Kamogawa Festival in August is the "Jizo walk," where participants walk across the city hunting for jizo statues.
Taikodani Inari Shrine in Tsuwano, Shimane is one of the most important Inari Shrines in Japan, and features an approach lined with closely placed torii gates, forming a red, tunnel-like entrance.
We strongly recommend visiting here if you're traveling to the San'in region.

By the way, the name "San'in" comes from the name of the road "San'indo," a road in the San'in region from when the province was divided into seven administrative divisions.

The San'in region is full of nature, history, and has plenty of sights to see. Hopefully we've got you interested in this hidden gem.
Be sure to check out the video if you haven't yet, as it contains some great footage of the San'in region, as well as information not featured in the article.
Enjoying fresh crab, soaking in the Misasa hot springs... the ways to enjoy the San'in region are endless!