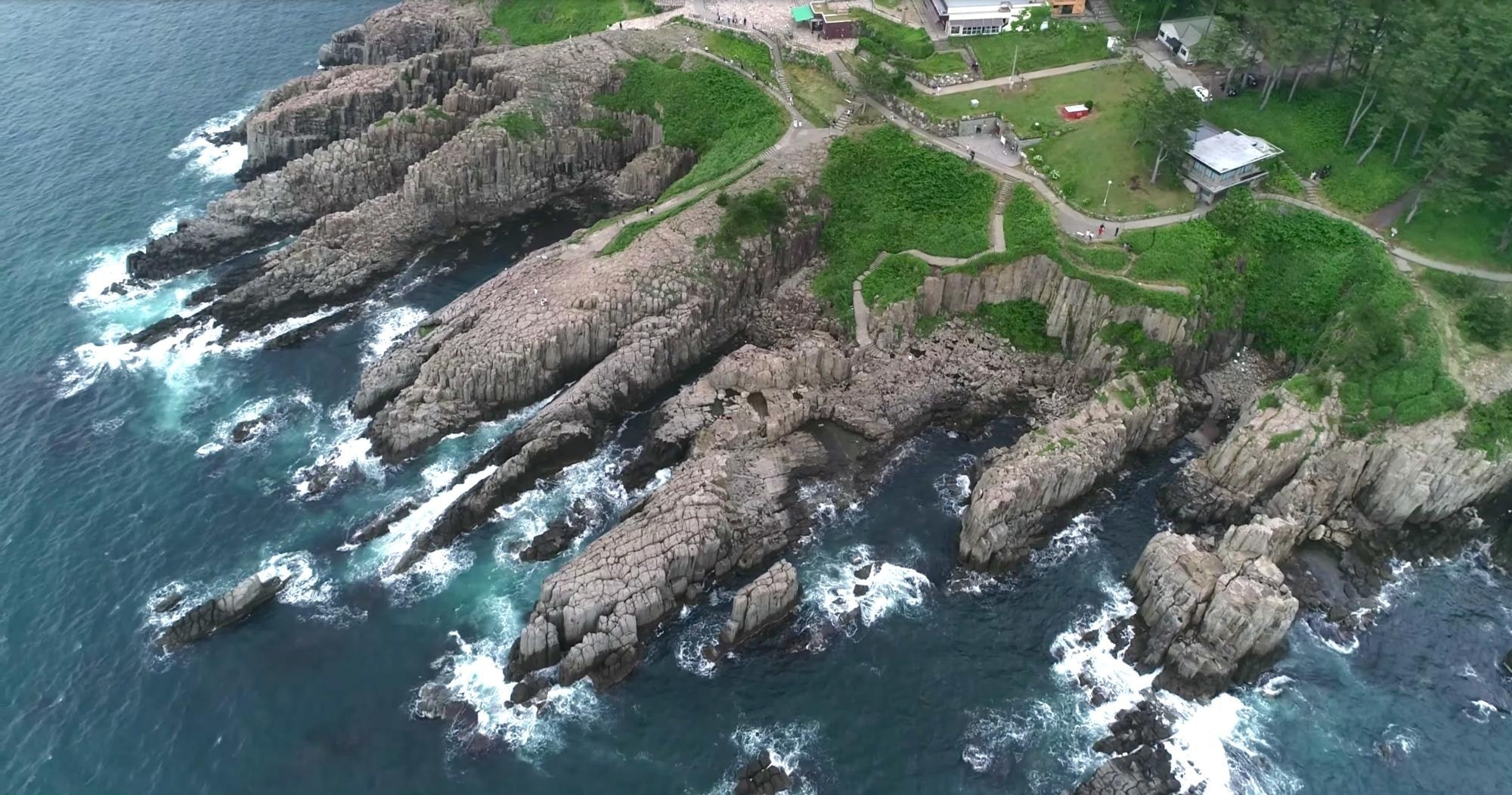 Tojinbo, in Fukui prefecture, located in Japan's Hokuriku region, is a series of vertical cliffs created by the rough waves of the Japan Sea.
It is a rare type of sea cliff which can only been seen in 3 other places in the world.
This video, titled "(4K) Aerial Drone Footage / Flown in Tojinbo in Sakai City, Fukui Prefecture" (【4K】福井県坂井市 東尋坊で飛ばしてみた / ドローン空撮), was produced by "Mattsu."
The video shows the exposed rock face and jagged landscape of Tojinbo via aerial drone footage.

The geological composition of the cliffs of Tojinbo is made up of pyroxene andesite and some of the cliffs tallest points are approximately 25m tall.
Its strangely shaped pillars extend for 1km and it has been designated a Natural National Monument and Scenic Spot, and is also a part of the specially protected area of Echizen-Kaga Kaigan Quasi-National Park.
It is also one of the world's 3 most geologically rare scenic spots, and therefore it is well known around the world.

The origin of the name Tojinbo is said to have come from the name of a monk "Tojinbo" who lived long ago and was affiliated with Heisenji Temple and lost his life after being thrown off the cliff in a romantic tangle.
After Tojinbo was thrown into the sea; another monk, his rival in love, was also pulled into the rough waves and tempestuous weather continued for 49 days. Or so the legend goes anyways...
It is also famous for being used as a film location for climactic scenes in which the culprit tries to throw him or herself into the sea after making a confession in suspenseful TV dramas or movies.

The Tojinbo cliffs, which is a rare rock formation even outside of Japan, is a famous place that even many Japanese would like to visit at least once.
In order to preserve Tojinbo's amazing view there are no safety features such as fences installed there.
You are able to walk around Tojinbo freely, however, please watch your step.

The recommended tourist sites around Tojinbo are, Tojinbo Tower, Echizen Matsushima Aquarium, the caravan campsite Kyukamura Echizen Mikuni, Echizen Matsushima, Minato-machi Mikuni, Shibamasa World, and the Araiso Shoreline Esplanade.
Also, if you take the Tojinbo/Oshima sightseeing boat tour, you will be able to see the cliff face from the ocean and will be able to enjoy all of the Instagrammable locations such as Lion Rock and Candle Rock.

In addition, the Mikuni Fireworks Festival is held near Tojinbo in the summer and every year many tourists flock to see this event.

When you the town Mikuni, in Sakai city, Fukui prefecture, that Tojinbo is in, try to stay at the Mikuni Kanko Hotel.
Japan's Hokuriku region is famous for Echizen crab and the crab dishes made from Fukui's freshly caught crab are absolutely delectable!

You should also definitely go to the nationally famous, Mikuni hot springs. Relax and rid yourself of stress by sightseeing in Tojinbo, eating delicious seafood and relaxing in the hot springs- All at the Mikuni Kanko Hotel.

Summary of Tojinbo in Fukui Prefecture

One of the world's most beautiful sights! Directions (access by public transportation such as bus), parking, events and other information about Tojinbo in Fukui prefecture, can be seen on the Mikuni hot springs official website "Mikuni Marugoto Navi."

Now that you've seen the beautifully taken drone footage, it’s time to see it in person!