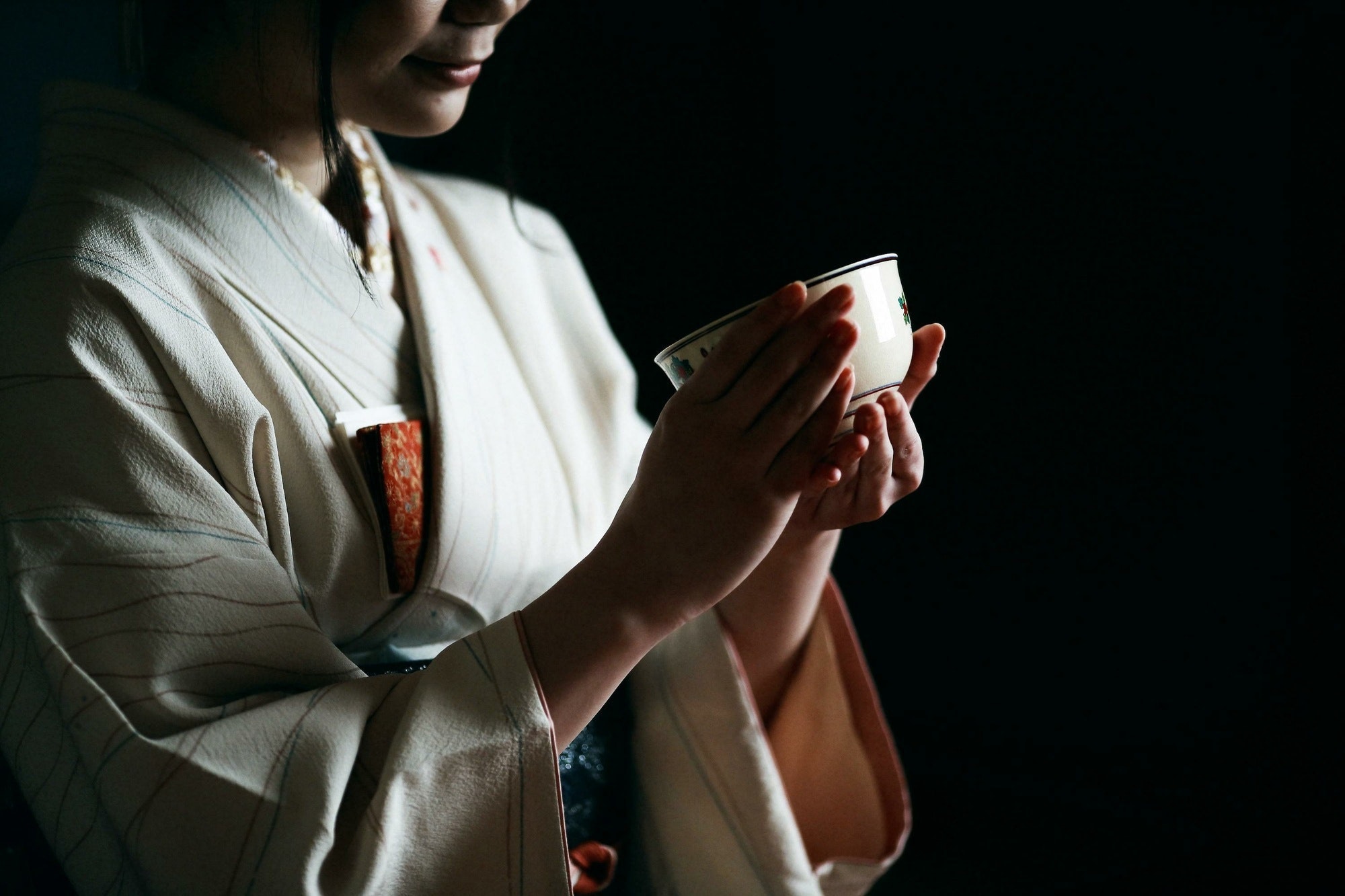 In the traditional Japanese tea school of Urasenke, there is etiquette that says one must have omogashi (main sweets) with koi-cha (thick tea) and higashi (dried sweets) when drinking usu-cha (thin tea).
Let’s check out the etiquette of Urasenke’s light tea and sweets by watching this video.

The Etiquette of the Urasenke School of Tea Ceremony

After the tea has been served by the host, the guest of honor will say "お先に" (O saki ni "Please excuse me for drinking first") while bowing to the second guest of honor, then place the tea bowl in front of their knees and say "お点前ちょうだいします" (O te mae choudai shimasu "Thank you for the tea").
This can be seen from 0:06 in the video.

Following this, they take the tea bowl in their left hand, put their right hand on the side of the bowl, and drink after having rotated the bowl clockwise twice.
The last sip will be sipped while making a slurping sound, cleaning off the drinking area with one's index finger and thumb, then cleaning the fingertips with a special paper called kaishi.
After that, the tea bowl is placed on the outside edge of the tatami mat, returning it with both hands.

One of each kind of the higashi that are served in the sweets container should be taken by hand and eaten after bowing once.
If there are 2 types of higashi, proper etiquette is to take the one furthest away from you first and then the one closest to you.
You can see the higashi being eaten from 0:16 in the video.

The Tools Used by the Urasenke School of Tea Ceremony

Other than the tea bowl, there are various tools used for tea ceremony.
In the Urasenke school of tea ceremony, these include the "chasen" (茶筅, bamboo tea whisk), "hishaku" (柄杓, ladle), "chashaku" (茶杓, bamboo tea spoon), "mizusashi" (水指, container for fresh water), "kensui" (建水, container for waste-water), "futaoki" (蓋置, rest for the lid of a teakettle), and the "chakin" (茶巾, tea cloth).
The tea bowl is placed before the knees and the brazier is placed directly in front of the "Katomado" (bell-shaped window).
As for the "fukusa" (silk cloth) which is used when handling tools in the Urasenke school of tea ceremony, women use red or plain vermilion colors and men use a plain purple color.

In addition, in tea ceremony, there are detailed teachings on the meaning of the tools and how to properly handle them, such as the "Shikaden" (四カ伝 "four transmissions").

More About the Urasenke School of Tea

Urasenke is one of the grand master tea schools of tea ceremony.
The name Urasenke was given because as opposed to the main family Omotesenke (omote = front) who succeeded Sen no Rikyu, Konnichian was seen from the back (ura) when looked at from the street.

The Urasenke school of tea ceremony, as well as Omotesenke and other schools all have detailed differences in etiquette regarding usu-cha and koi-cha and the order in which things are done.
There are events such as Ryurei and Hatsugama at the grand master tea schools, so if you're interested consider checking these out as well.

The video goes over the method of drinking tea according to the Urasenke shool of tea ceremony.
Tea ceremony may seem difficult, but there is a point in learning the etiquette, so it's easy to get hooked once you experience it.

There are tea ceremony schools giving lessons all over Japan, so if you are interested, consider checking out their websites, looking for a school nearby, and learning how it's performed? You may even find yourself receiving a certificate if you study hard!