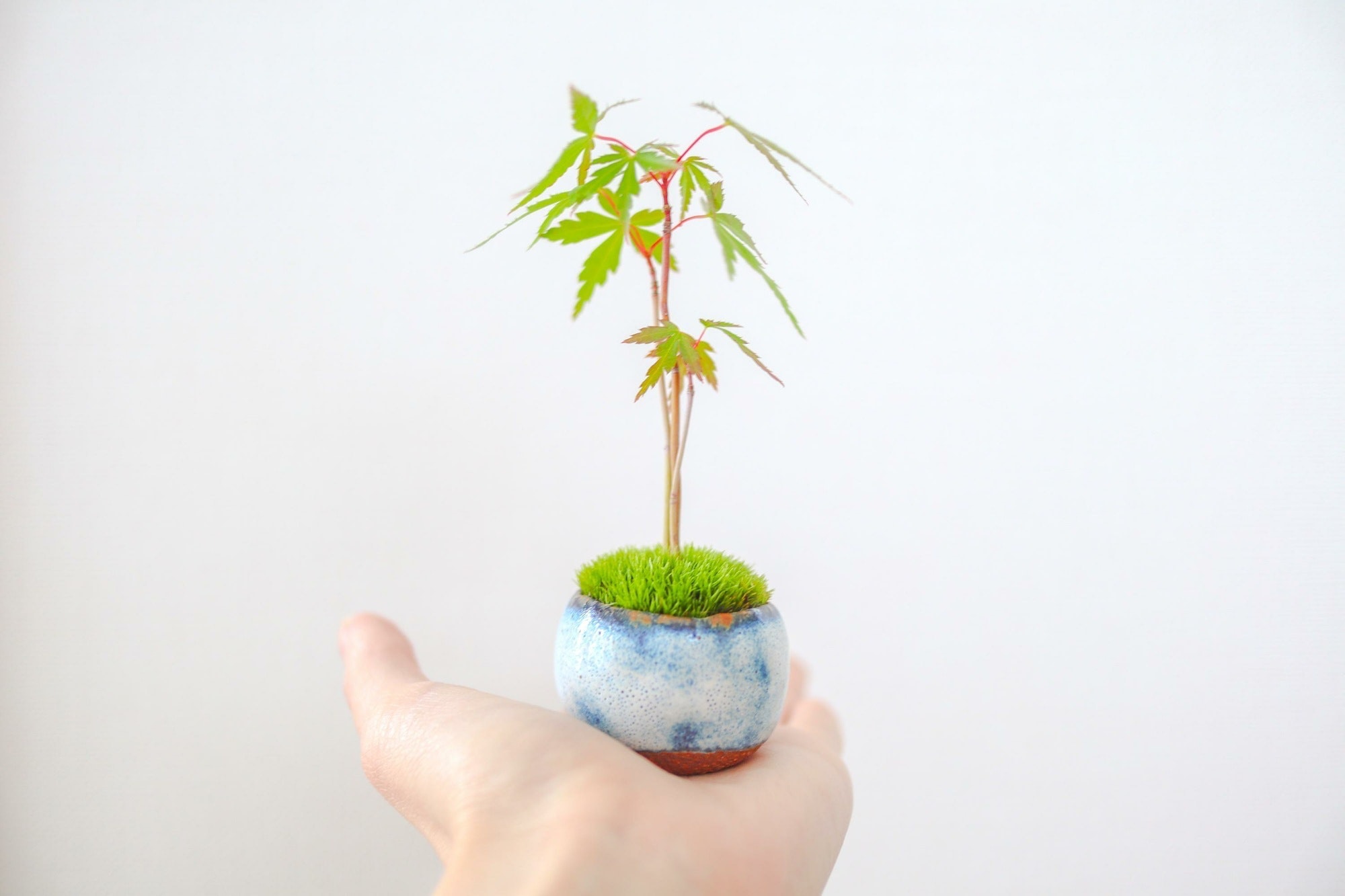 About the Video on Making Minature Bonsai

Bonsai is the appreciation of plants that have been carefully shaped to resemble natural scenery.
It is characterized by the representation of a large tree or plant in a small pot.
Bonsai has been enjoyed in Japan since ancient times, but in recent years, it has become so popular as an interior decoration outside of Japan and the term "Bonsai" is now well known.

In bonsai, there are rules on how to trim trees and also set varieties.
Here are some of the different types of plants that can be used.

【Shohaku Bonsai】: Conifers, a typical species of bonsai.
Their greenery can be enjoyed year-round.

【Hamono Bonsai】: Deciduous trees, like the maple in the video, can be used to enjoy the changing seasons.

【Flowering Bonsai】: Plums, cherries, etc. whose flowers can be enjoyed.

【Fruiting Bonsai】: Bonsai that bear fruit and can be enjoyed in all four seasons.

1. Since we'll be using a teacup as a pot, we'll start by making a hole in the bottom of the teacup for water drainage and four grooves in the base for air flow.
Use an electric drill to make a hole in the teacup, being careful not to break it, and then use a diamond file to make grooves.
This can be seen from 0:07 in the video.
2. Place a net or mesh at the bottom of the teacup. (Video 5:07~)
3. Put the large pieces of soil left over from sifting akadama soil into the bottom of the teacup. (Video 5:19~)
4. Next, make a soil mixture of 3 mulch to 7 akadama soil. (Video 6:34~)
5. Gently dig out the maple to be planted, being careful not to break the roots, and soak it in a vitalizer for about an hour. (Video 7:14~)
6. Hold the maple with one hand and add soil to stabilize it. (Video 9:12～)
7. Spread moss on the surface of the soil. (Video 11:45～)

The best place for miniature bonsai is indoors in the sun.
However, maple trees are sensitive to strong sunlight, so keep them in a semi-shaded area.

Also, place them in a place where they will not be exposed to the wind of an air conditioner.
Be sure to water generously when the moss on the surface is dry.
Water your plants about once a day in spring and winter, three times a day in summer (morning, afternoon, and evening), and once or twice a day in autumn.

The video gives a detailed introduction on how to make teacup bonsai, so be sure to check it out if you still haven’t yet.
Stylish miniature bonsai can also be purchased online, so if you don't have the time to make one you can always purchase a pre-made bonsai.

Consider incorporating miniature bonsai into your interior design to give your home a hint of Japanese culture and enjoy the fun of growing them!