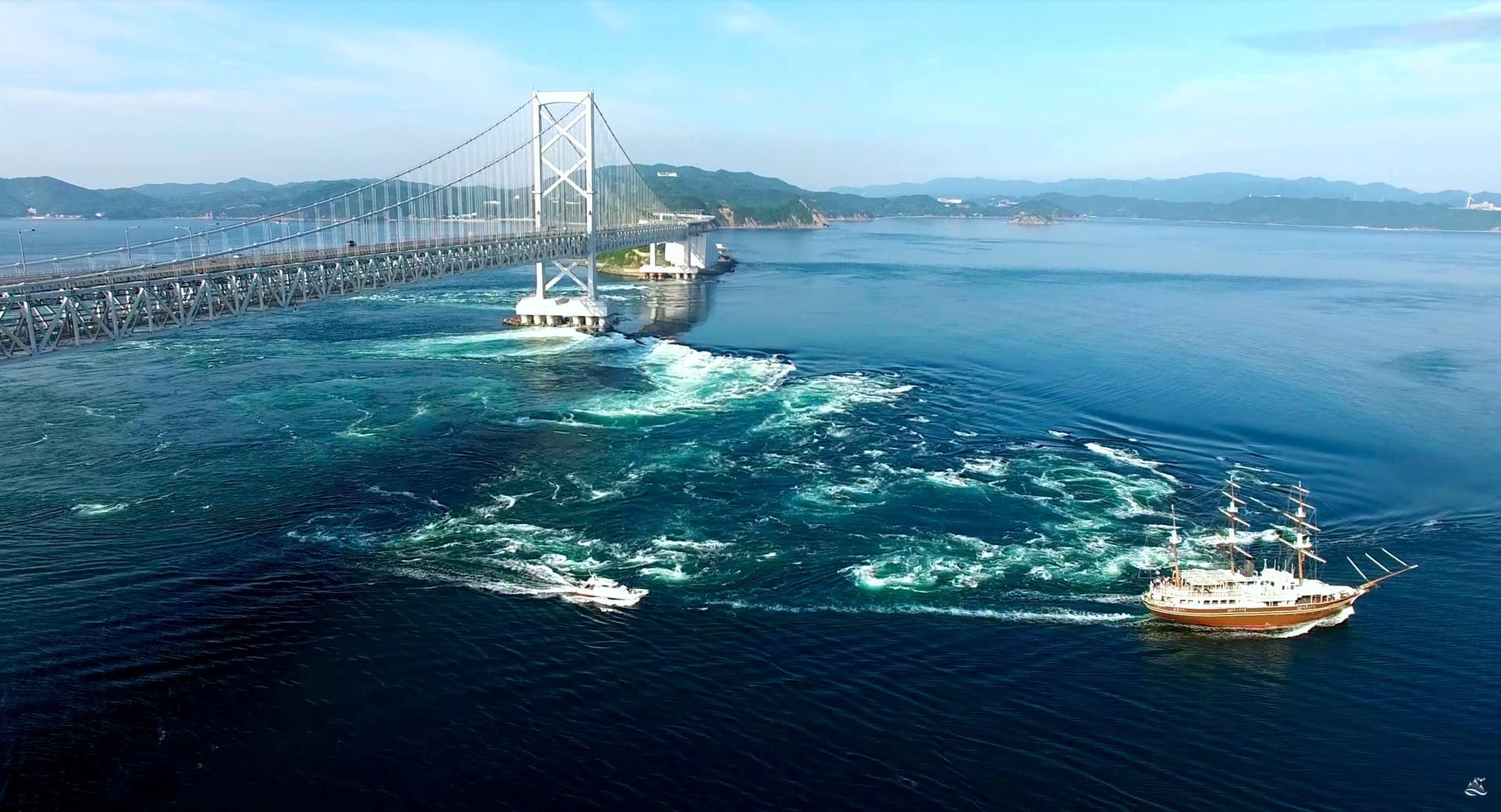 Drone Footage of the Whirlpools of the Seto Inland Sea and the Onaruto Bridge!

The video that we'll introduce today is called "[Aerial View] Seto Inland Sea Whirlpools｜Drone Footage of Onaruto Bridge [4K]｜Tokushima to Awaji Island, Hyogo" (【絶景空撮】瀬戸内海・渦潮 ドローン空撮 大鳴門橋【4K】（四国徳島〜兵庫淡路島）). The video was created by "winteroptix." It shows beautiful drone footage of the whirlpools of the Seto Inland Sea and the Onaruto Bridge.

You can enjoy a beautiful view of the Seto Inland Sea, the Naruto whirlpools, and the magnificent scenery of the Onaruto Bridge, all in one video!

The Onaruto Bridge and Whirlpools of the Seto Inland Sea

Onaruto Bridge (大鳴門橋,Onarutokyo) is a suspension bridge that connects Fukurahei, Minamiawaji City, Hyogo Prefecture and Tosadomariura, Naruto Town, Naruto City, Tokushima Prefecture.
The bridge is 1,629 meters long and 25 meters wide, and its main tower is 144.3 meters tall.
Honshu-Shikoku Bridge (本州四国連絡船橋, Honshushikokurenrakukyo), Onaruto Bridge, and Akashi Kaikyo Bridge (明石海峡大橋, Akashikaikyoohashi) are 3 of the most crucial traffic routes connecting Honshu (本州) and the Shikoku Region (四国地方,Shikokuchiho).
Since the bridges span the sea, they are often closed to traffic due to wind speeds, so be careful when passing through.
Onaruto Bridge is a motorway so you cannot cross it by foot, bicycle, or scooter.

There used to be a ferry company called Naruto Ferry that ran between the Shikoku Region and Awaji Island (淡路島, Awajishima), but it is now out of business.
There is a plan to add a railroad to Onaruto Bridge and enable the Shikoku Shinkansen to cross the Seto Inland Sea in the future, so you may one day be able to go to the Shikoku Region by bullet train!

The Naruto whirlpools are whirling tides of water that appear in the Naruto Strait (鳴門海峡, Narutokaikyo).
You can observe them at around 0:07 in the video.

Some of these whirlpools have a diameter of 20 meters, making them the largest whirlpools in the world.
The Naruto whirlpools appear due to currents from the Seto Inland Sea and the Kii Channel (紀伊水道, Kiisuido) violently colliding with one another near Naruto.
The area around Naruto has a wide tidal range, with the difference between the high tide and low tide going up 1.5 meters during the spring, and its current is said to be the fastest in Japan.
The Naruto Strait is said to be one of the world’s three major currents, along with Italy's Strait of Messina and Canada’s Seymour Narrows.

There's a sidewalk called "Uzu no Michi (渦の道) on Onaruto Bridge, which hangs over the Seto Inland Sea.
From here, you can look down at the Naruto whirlpools from the bridge.
The area gets many tourists and is famous for being instagrammable!
The entry fee is 510 yen for adults, 410 yen for junior high and high school students, and 260 yen for young children.
There's also the Onaruto Bridge Museum Eddy (大鳴門橋架橋記念館エディ, Onarutokyo kakyo kinenkan eddy) nearby, so consider dropping by during your visit.
The bridge is lit up at night, providing a a beautiful view that you won't be able to see during the day.

If you want to observe the Naruto whirlpools up close, we highly recommend taking a cruise on the whirlpool sightseeing boats run by Uzushio-kisen.
The cruise ships go near the whirlpools, so you can experience the thrilling natural phenomenon!
If you're prone to seasickness, be sure to take some seasickness medicine beforehand!

Summary of the Naruto Whirlpools of the Seto Inland Sea

Today, we introduced drone footage of the whirlpools of the Seto Inland Sea and Onaruto Bridge.

If this article/video have you interested in the Naruto whirpools, be sure to visit Tokushima prefecture!