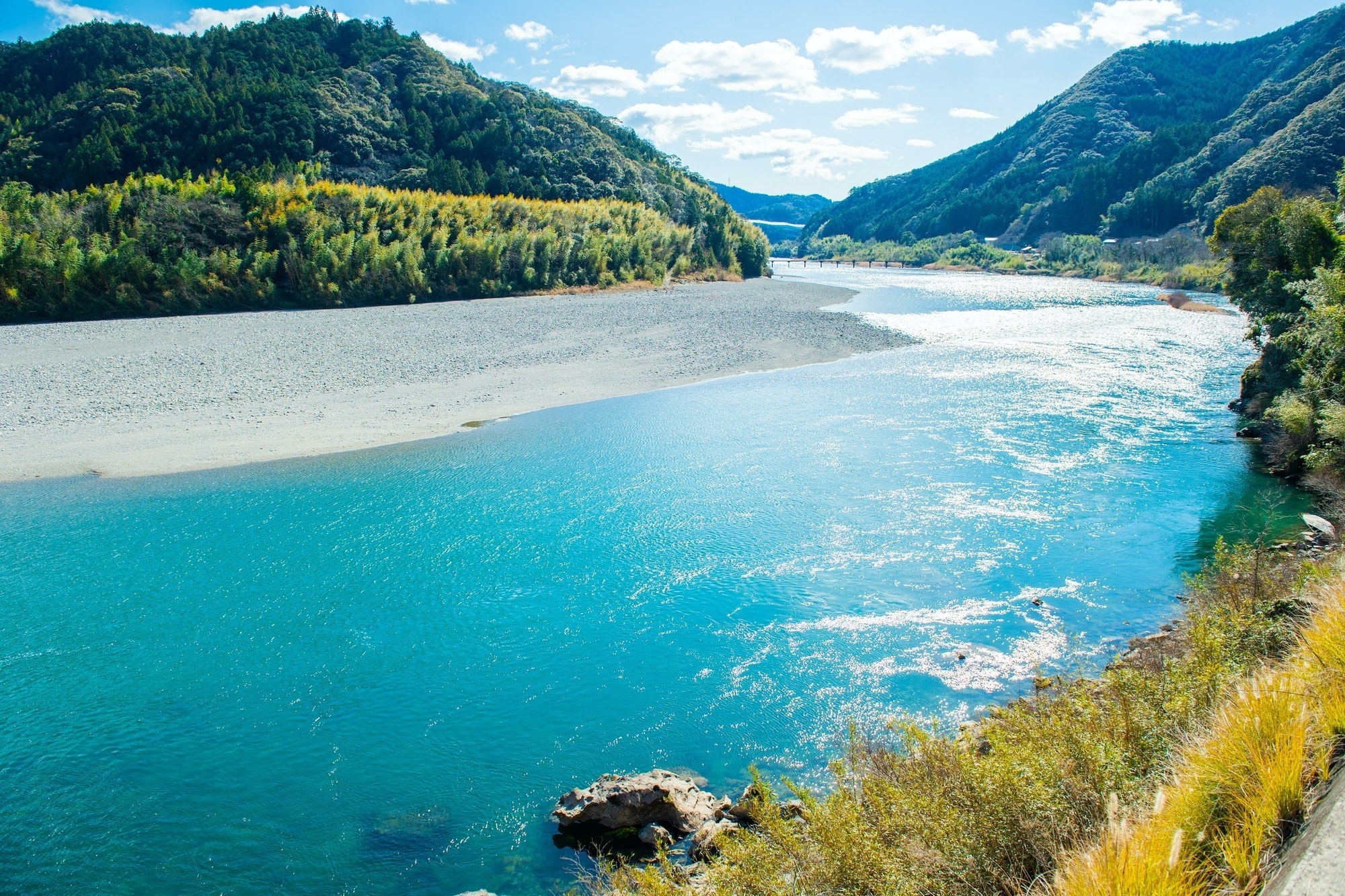 When asked about famous rivers in the Shikoku region, most people picture the Shimanto River (四万十川, shimantogawa), but did you know there is an even prettier river in the area?
I'm of course referring to the Niyodo River.
As the third largest river in Shikoku, after the Shimanto River and Yoshino River (吉野川, yoshinogawa), it ranks number one year after year as the river with the best water quality in Japan.

As you can see in the video, the crystal clear water of the Niyodo River is absolutely stunning and has been given the name "Niyodo Blue" after its mystical blue color.
In the video, you can enjoy viewing the river from both above and below the surface of the water!

Serpent Sanctuaries and Instagrammable Spots Near the Niyodo River

Mt. Ishizuchi's (石鎚山, ishizuchisan) Omogo River in Ehime Prefecture (愛媛県, ehimeken) is the main water source for the Niyodo River and the streams that run through the valleys of Kochi Prefecture (高知県, kouchiken).
Niyodo River is 124 kilometers long and has a surface area of 1,560 square kilometers.
The river runs through mainly mountainous regions and the combination of both the beautiful natural surroundings and stunning blue color of the river makes the area very picturesque.

From 1:50 in the video, you can see the basin of "Nikobuchi" (にこ淵), which is thought to be the home of the legendary eight-headed serpent Yamata no Orochi.
On a sunny day during the hours of 11 am and 3 pm, the light shines directly into the pool and the blue color of the river is even more prominent.

We highly recommend visiting Nakatsu Gorge (中津渓谷, nakatsukeikoku) and Yasui Gorge (安居渓谷, yasuikeikoku) during the fall to see the beautiful scenery.
There are many beautiful spots along Nakatsu Gorge, such as Uryu Falls (雨竜の滝, uryuunotaki), Momiji Falls (もみじだき) and Ryugubuchi (竜宮淵).
The special rocks called "Ishibashira" (石柱) are another great sightseeing spot.
The pool of water known as "Suishobuchi" (水晶淵) along Yasui Gorge changes color from blue to green depending on the season and time of day.
The contrasting colors of the fall foliage and the river attracts many visitors and the area has become a very popular tourist destination.

In the second half of the video, from 2:09, you can see some of the low-water crossings found along Niyodo River.
A distinguishing feature of these types of bridges is that they have no sides or guard rails, which allows them to blend easily into the surrounding nature creating a beautiful landscape.

The Niyodo River Is Popular Among Both Locals and Tourists!

In recent years the number of tourists visiting the Niyodo River has increased dramatically, but the river is still just as popular among the locals.
The Niyodo River area has a population of approximately 110,000.
In the middle reaches of the river, there's the multi-purpose Odo Dam (大渡ダム) and facilities for flood control and power supply development, which support the lives of people living in harmony with the Niyodo River.
There are also several campsites in the area for those who'd like to spend the night in the beautiful outdoors.

There are many fun activities to take part in, such as canoeing and rafting or you can simply go for a swim.
There is also a stone skipping competition held here each year.
The locals can often be seen playing in the river.
In 2002, the Niyodo River was the most visited river in Japan.
Not only is it the most beautiful river in Japan, it's also the most loved river by its locals.

Summary of the Niyodo River

The mystical blue water of the Niyodo River captivates all who look upon it.
The majority of the river is surrounded by mountains making it fairly difficult to access via public transportation.
We recommend renting a car or taking a trip to the river by bike!
There is a roadside station near the river with hot spring facilities where you can also spend the night, a perfect place to relax after a long day of sightseeing.

For those who don't have a valid driver's license in Japan but still wish to visit the Niyodo River, please check out the Niyodo River Tourist Association (仁淀川観光協会, niyodogawa kankou kyoukai) website for more information on how to access the river via public transport (※Unfortunately the website is only in Japanese).

Some of the roads from the car park to the spots introduced in the video can be slippery so please be careful when walking.
If you still haven't yet, be sure to enjoy the mystical world of the beautiful, blue Niyodo River in the video.