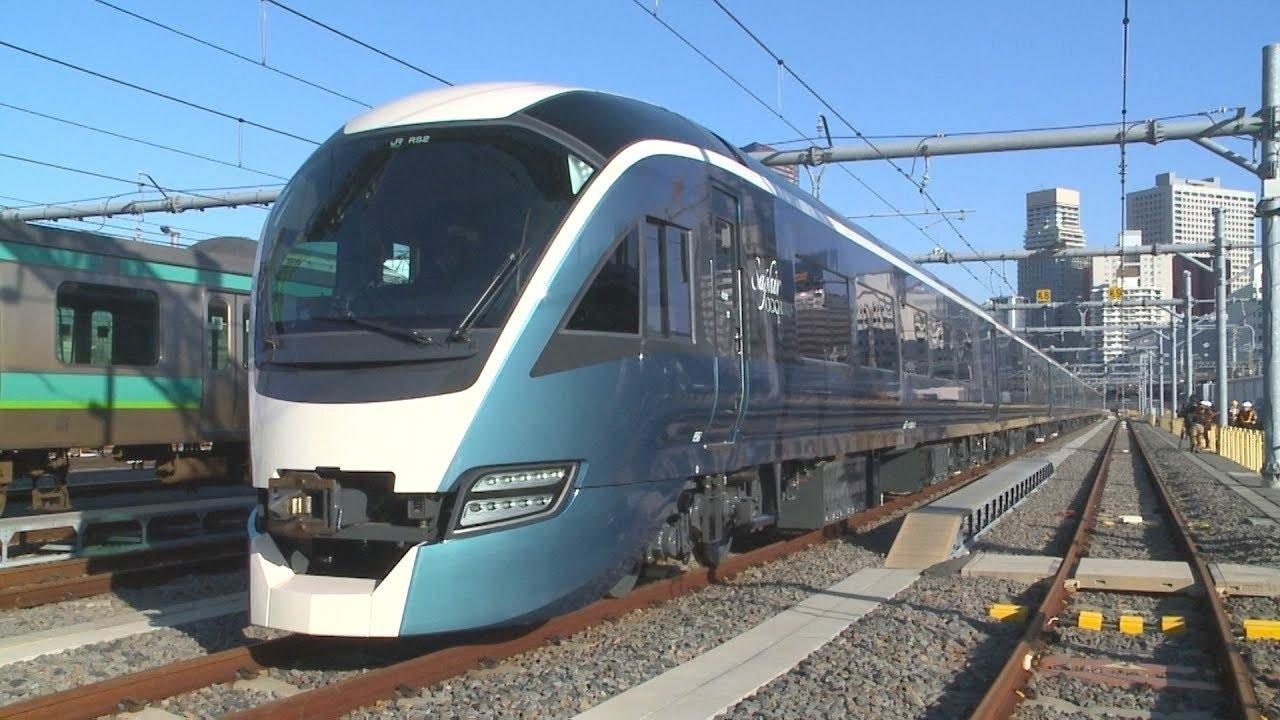 This video, titled "The Opening of Saphir Odoriko - All Seats First Class or Better" (「サフィール踊り子」公開 全座席がグリーン車以上), was released by "KyodoNews."
The video of the news was made open to the press in December 2019. The Limited express train “Saphir Odoriko” will operate on Tokyo-Shinjuku・Shizuoka-izukyuushimoda route, and it will be entered into train schedules by March 14th, 2020.

The characteristics of the Saphir Odoriko are its private rooms, and first class or higher seating.
It will become a frequently used line connecting the Metropolitan area to Izu.
Please watch the video for an inside look at the luxurious accommodations, and to feel the high class nature of this limited express sightseeing train that allows for a comfortable journey between Tokyo and Izu.

After the Super View Odoriko of JR East is decommissioned in March 2020, the Saphir Odoriko (Railway series: E261) limited express sightseeing train is a brand new train that will grant easy access to popular sightseeing locations around Izu.
The namesake "Saphir" in French means "sapphire" reminiscent of its appearance which looks like the beautiful blue sea and sky in Izu.

Saphir Odoriko has 8 cars with a capacity of 164 people and the first car (which is a premium Green Car) has skylight seating, so when traveling towards Shimoda passengers can feel the natural light of the sky with luxury 1 to 1 seating accommodating up to 20 people in each row.
This can be seen at 0:56 in the video.
The seating in the 2nd and 3rd cars are for groups of families and friends, and the private green rooms placed in them can accommodate 4 to 6 people. The seating in cars 5 to 8 are Green Cars and have 1 by 2 (◼+◼◼) seating.
They are introduced at 1:29 in the video.

In addition, car 4 is a dining car, and is made in the style of an open noodle bar, so you can enjoy some great tasting noodles during your journey.

According to the chief of vehicles at JR East's railroad technology center, the appearance of the "Saphir Odoriko" is a metallic blue that is based on the beautiful colors that can be seen in Izu's natural scenery ( 2:05). You can see the train's appearance at 0:14 in the video.

Facilities on the Saphir Odoriko

Photo：A woman using a laptop on a train

Conscious about the upcoming Tokyo Olympics, the facilities on board the “Saphir Odoriko” were designed to accommodate the large influx of inbound tourists, and are thus equipped with large luggage compartments, and free Wi-Fi services. In the private green rooms, luggage compartments are installed inside the room itself. Every seat on the Saphir Odoriko also comes with its own personal electrical outlets for charging laptops, phones, and other electronic devices.

That being said, you won’t need to worry about preserving data and battery life while riding on the “Saphir Odoriko”, and can instead use your time freely and effectively.

Summary of the Saphir Odoriko

On the way to popular sightseeing spots in Izu, you won’t need to worry about traffic jams or if the train is running on time as it’s a reputable railway.
As shown in the video, with the light pouring in through the skylights, and the train’s high-class feel, you’re sure to have a relaxing, unforgettable experience traveling with friends or family on the Saphir Odoriko.

As of this news' release, the Saphir Odoriko is scheduled to make a round trip once per day between Tokyo and Izu.
The currently announced stops for the Saphir Odoriko are: Tokyo station, Shinjuku station, and Izukyuushimoda station, but please keep in mind that these are still subject to change.
For ticket prices, or to make reservations, please stop by a JR ticket office.