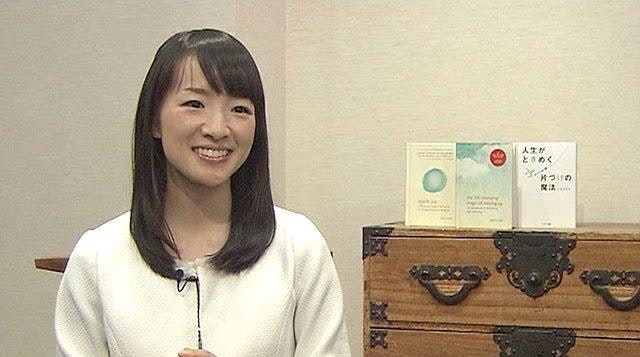 An Introduction to Marie Kondo, the Organizing Consultant!

This time, we'll introduce the video “Marie Kondo: The Life-Changing Magic of Tidying Up / アメリカでもベストセラー！「人生がときめく片づけの魔法」こんまり人気に迫る！”

This is the video featuring Marie Kondo , an organizing consultant.
Her book “The Life-Changing Magic of Tidying Up” sold as many as 5 million copies across 41 countries. Some people have even called it the "Cleaning Bible".

Marie Kondo is a small lady, at just 147 cm tall.
She lives in America with her husband and their children.
Her blog and Instagram explain how to organize rooms. Many fans pay attention to her Social Networking Service.

Marie Kondo also runs an online shop selling kitchen and bath goods.
Her picture book “Kiki & Jax The Life-Changing Magic of Friendship” published in 2019 also became a hot topic for a while.

In 2015, she garnered a lot of attention after being featured on the TV program “Jounetsutairik."
The original Netflix series “KonMari The Life-Changing Magic of Tidying Up” where American families are visited and receive help tidying up is also very popular.

How Great Marie Kondo's “The Life-Changing Magic of Tidying up” Is!

Her book “The Life-Changing Magic of Tidying Up,” published in 2010, sold over a million copies and was made into a drama in Japan.

Moreover, the English version dominated the top of the charts on Amazon's Best Sellers list.
It also came in first and second together with her new book “Spark Joy” in the New York Times' "How-To" list.
Marie Kondo was also chosen as one of “the 100 most influential people in the world”.
This is introduced at 0:20 in the video.

What Is Marie Kondo's Organization Method?

The public interview of Marie Kondo about “The Kon Mari Method” well noticed in New York in Amerika is shown from 1:19 in the video.
The secret to Marie Kondo’s organization is “To clean up and keep what is important and what sparks joy” and “to appreciate” one's belongings.
According to the journalist (from 2:54 in the video), Marie Kondo told American who love shopping and tend to accumulate things that removing some of them and simplifying, will lead to happiness.
The KonMari Method has reached the hearts of many people.

Summary of the Video of Marie Kondo, the Organizing Consultant

Marie Kondo’s way of organizing is getting a lot of attention not only in Japan but also in other countries as well.
For those who have endless worries about organizing, and are interested in the Japanese culture of organizing, please refer to Marie Kondo.

You can expect more secrets to achieve an organized life by checking out some of the books by “Yamashita Hideko” who proposed “Danshari” (detachment from possessions).