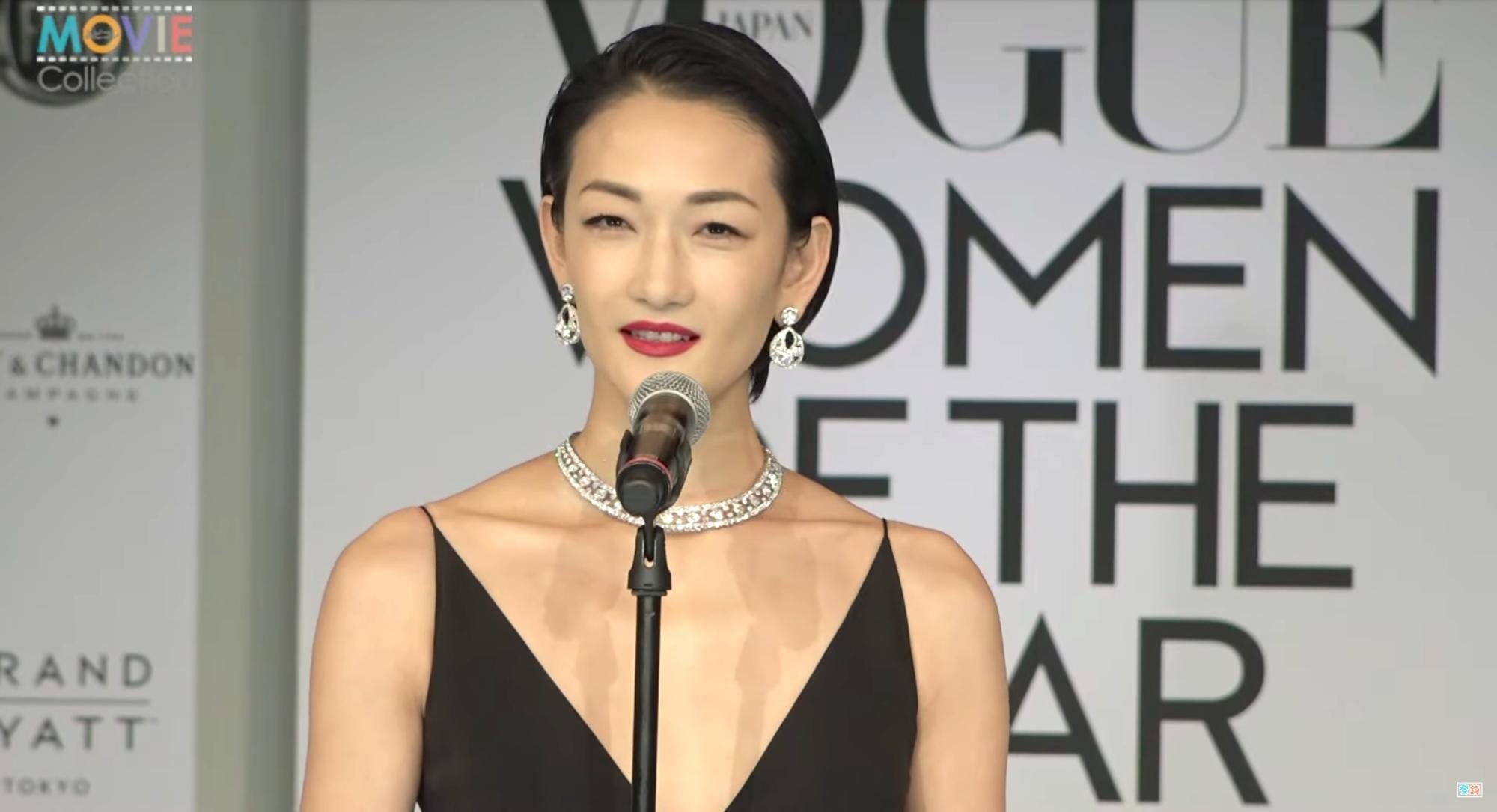 The video "Ai Tominaga Overcome With Emotion While Receiving the " Vogue Japan" Award, Sparking Her Debut / Vogue Japan Women of the Year 2019 Awards Ceremony（冨永愛、デビューのキッカケとなった「VOGUE JAPAN」の賞を受賞し感極まる／VOGUE JAPAN WOMEN OF THE YEAR 2019 授賞式）,” was produced by “moviecollection.jp”.
Shown in the video is, Ai Tominaga being interviewed on stage at the fashion magazine “Vogue Japan” awards ceremony after being nominated for the “Women forging their careers without forgetting passion and objectivity” category in 2019.

In this article, we'll comment on the relationship between VOGUE and Ai Tominaga, as well as her charming allure.
Watch the video to see the overwhelming beauty of the popular supermodel Ai Tominaga donning her black Givenchy dress and short, sleek black hair.

Who Is the Top Model AI Tominaga, and How Did She Reach the Forefront of Her Field?

She started out as an amateur model for the fashion magazine “PuchiSeven”, but having a picture of her in her school uniform during her high school years featured in VOGUE expanded her opportunities astronomically.
She made her debut on the world stage as a runway model in 2001 at New York Fashion Week and gradually became a top model representing Japan, working runways such as Paris Fashion Week.
In the video, she talks about her relationship with VOGUE on the stage at the awards ceremony.
You can see the interview from 0:45 in the video.

Presently, she not only works as a supermodel, but has also moved into television, radio, and is featured in some commercials as well. She even makes guest appearances at events.
In 2019, she appeared in the television drama “Grand Maison Tokyo” featuring Takuya Kimura. This became a very hot topic, and attracted a lot of media attention.
As for her personal life, she got married to a pastry chef but they later divorced and she now raises their son.

She also published her first beauty book “The Rules of Beauty” in March of 2020.
This book details Ai Tominaga’s personal life, including things such as diet and makeup routines.

The “VOGUE JAPAN Women of the Year” award, as shown in the video, is an award that is handed out to remarkable women by the fashion magazine “VOGUE JAPAN’.
Besides the “Women of the Year” award, they also created a new category called “Women of our Time” to celebrate the 20th anniversary of the magazine.
This category was meant to acknowledge women who have worked a long time at the forefront of their fields but that have also continued to increase their appeal over the years.
The trophies handed out to the awardees was designed by the artist, Asami Kiyokawa.

The women nominated for the 2019 “Women of the Year” award were: the celebrity Rino Shinohara, singer/songwriter Rina Sawayama, the organizing consultant Marie Kondo, professional golf player Hinako Shibuno, the actress Hana Sugisaki, and the model Mika.
In contrast, the nominees for the “Women of Our Time” award, were the actress Haruka Ayase, the model Ai Tominaga, the singer Yumi Matsutoya, and Tetsuko Koyanagi.
Each awardee shone on stage in outfits that displayed their individuality.

The video "Ai Tominaga Overcome With Emotion While Receiving the " Vogue Japan" Award, Sparking Her Debut / Vogue Japan Women of the Year 2019 Awards Ceremony" shows Japanese top model Ai Tominaga giving her thank-you-speech, saying “I am grateful to have been able to work as a model for the past 20+ years. I’m tearing up….”.

Her superb figure that she has maintained after all these years, as well as her moving thank-you-speech show that she has the radiance of someone deserving of this award.
Take a look at the video showing the continued brilliance of Ai Tominaga.
You can also see the latest information on Ai Tominaga by following her on Instagram!