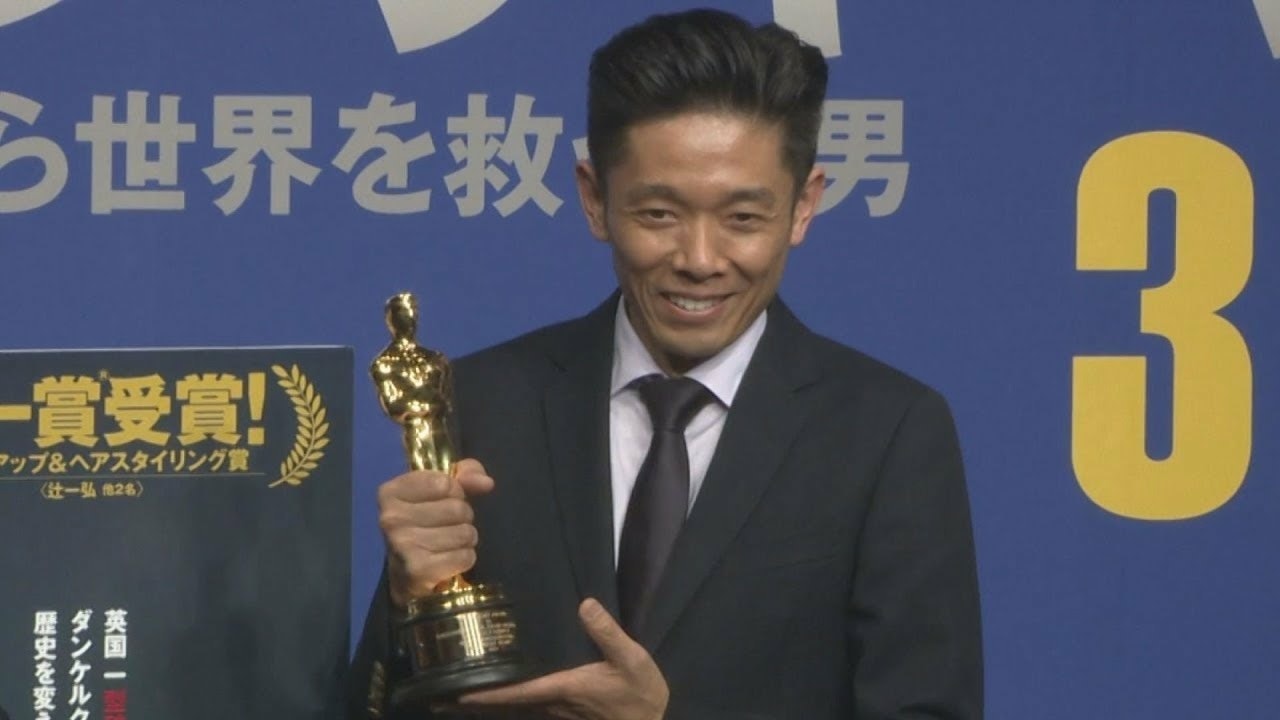 Kazuhiro Tsuji was in charge of the special effects make-up of Gary Oldman, who played the role of Winston Churchill in the film “Darkest Hour,” released in 2017.
The make-up he did on Gary Oldman received recognition and he became the first Japanese person to win the Academy Award for Best Makeup and Hairstyling.
In the video, you can see him giving an elated speech during his interview.

In this article, we'll talk about Kazuhiro Tsuji, winner of the 2018 Academy award for hair and makeup. Be sure to follow along with the video!

Kazuhiro Tsuji is a make-up artist and contemporary artist from Kyoto city, Kyoto prefecture in Japan's Kansai region.
He is an American citizen, living in Los Angeles, and goes by the name “Kazu Hiro.”
During his high school years, he happened to look at a film magazine that had an article of special effects make-up done by the world-renowned make-up artist Dick Smith, and from that, he became interested in make-up. Thus, he began learning about special effects make-up.

He was a teacher at the Yoyogi Animation Academy, and was in charge of make-up on the Japanese film “Sweet Home.” He emigrated to the United States in 1996.
He studied under Dick Smith and worked on many Hollywood movies such as “Men in Black” and “Planet of the Apes.”
He was also in charge of the make-up for movies such as “How the Grinch stole Christmas,” “Click,” and “Norbit.”

He became an American citizen in 2019, and after naturalizing in America, he also changed his name to Kazu Hiro.
He has an Instagram account where you can see some of his make-up and art as well.

Kazuhiro Tsuji was in charge of actor Gary Oldman’s special effects make-up in the English film, “The Darkest Hour,” released in 2017. This can be seen at 0:26 in the video

Kazuhiro Tsuji had actually retired from the film industry in 2012 and had been active as a contemporary artist but after receiving a passionate offer from Gary Oldman, he decided to return to the industry.
It took more than 4 hours to put on the special effects make-up that transformed Oldman into the former prime minister Winston Churchill.

The transformation of Oldman to look like former prime minister Churchill, was recognized and as it's shown in the video, he received the Academy Award for Best Makeup and Hairstyling at the 90th Academy Awards in 2018.
This is the first time a Japanese person has won an Oscar at the Academy Awards since the film “Okuribito” won the Foreign Language Film Award at the 81st Academy Awards.
From 1:03 in the video, you can see Kazuhiro Tsuji’s delighted expression as he comments on his achievement. He also comments on the Oscar statue at 1:59.

In 2019, he was in charge of the special effects make-up on "Scandal" at the request of Hollywood actress, Charlize Theron.
This was also recognized as high quality, near-perfect make-up and he received the Academy Award for Best Makeup and Hairstyling, for the second time, at the 92nd Academy awards.

In the video “Kazuhiro Tsuji, [So Excited to Have Received the Award] Academy Award Report（「辻さん、アカデミー賞報告 「うれしかった」）,” produced by “KyodoNews” in 2018, you can see Kazuhiro Tsuji at a press conference held when he returned to Japan for a visit.

At the end of the footage, he says that he will be holding an exhibit in 2020.
His exhibition is something to look forward to seeing, as he is also a renown contemporary artist.