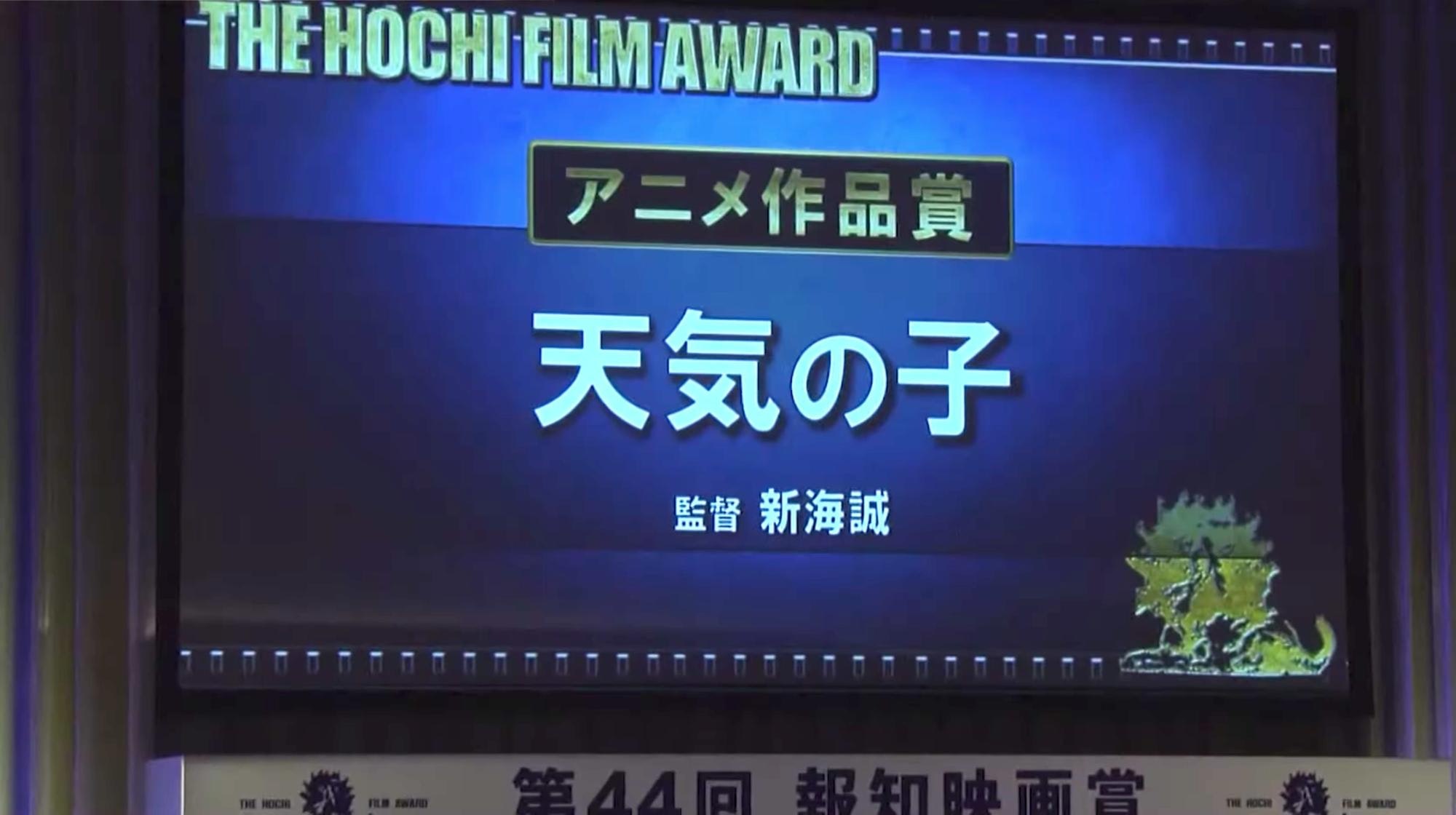 Weathering with You - Best Animated Picture

The movie "Weathering with You," won the Hochi Film Award in 2019.

This article will introduce "Weathering with You," alongside the video.

Weathering With You - Hochi Film Award for Best Animated Picture

The 2019 blockbuster "Weathering with You" received the Hochi Film Award for Best Animated Picture.
As you can see from 0:10 in the video, director Makoto Shinkai was interviewed at the award ceremony, and went on to say that he wanted to create a film that would take audiences to a world full of different types of entertainment.
The voice actor, Daigo Kotarou, who voiced protagonist Morishima Hodaka, and voice actor, Mori Nanana, who voiced heroine Hina Amano, also visited to congratulate him.

Weathering with You, which won the Hochi Film Award for Best Animated Picture, is a feature-length animated film about the weather.
The slogan for the movie was "This is a story about the secrets of the world that only her and I know." This is the 7th film directed by Makoto Shinkai, the first in three years since his previous film "Your Name."
Weathering with You is the story of how the protagonist Hodaka, who ran away from his home on an isolated island, to Tokyo, where he meets Hina, a girl who can clear the skies with her prayers, and together, they choose how to live.

The film was shown on 448 screens at 359 theaters, one of the largest screenings in history. It also broke the record for first day screening attendance.

In the first three days after the screening, it recorded an attendance of 1.15 million people and grossed 1.6 billion yen at the box office, surpassing Shinkai's previous work "Your Name." By April 2020, the film had earned 14 billion at the box office, making it the 12th highest-grossing film of all time.
It was also released in 140 countries and territories overseas, and was the number one film at the box office in its first week in Hong Kong and Taiwan.
It has become a popular work all over the world.

The music was composed by RADWIMPS as in the previous work.
There are 5 songs, including "Is There Still Anything That Love Can Do?," "We'll Be Alright," "Grand Escape feat. Toko Miura," "Celebration feat. Toko Miura," "Voices of the wind" and the ending theme.

Popular actors Shun Oguri and Tsubasa Honda also provided the voices of the characters in the film. It has become a very popular work due to the beautiful images and music.

Summary of Weathering with You

Published by "Sports Hochi," "44th Hochi Film Award｜Best Animated Feature｜"Weathering with You" gives a look at the animated picture "Weathering with You," by Makoto Shinkai, and also shows an interview with the famed director, where he talks about his films and his thoughts on his works.