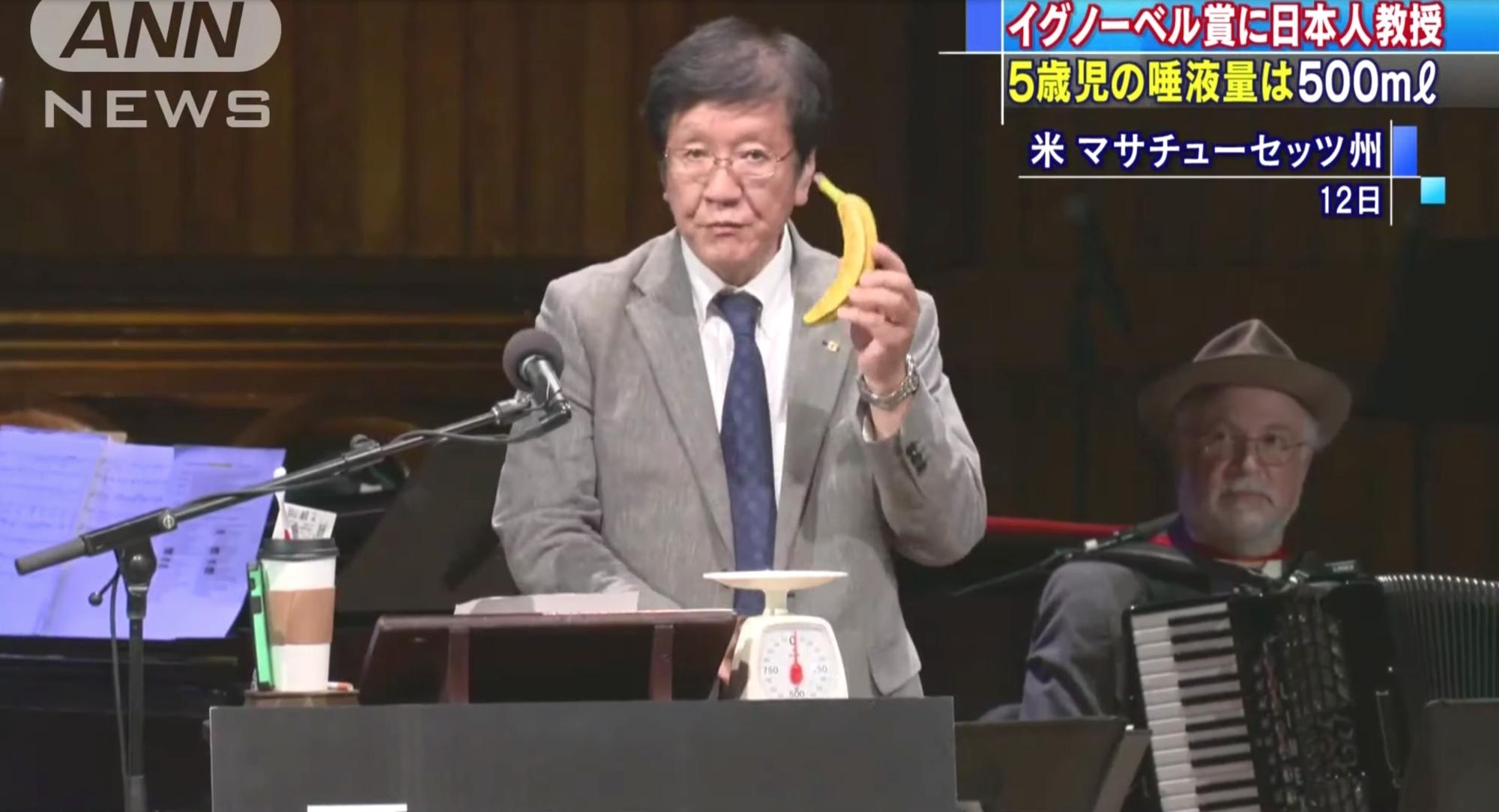 What is the Ig Nobel Prize?

The Ig Nobel Prize is a parody of the Nobel Prize, with the first awards ceremony held in 1991 at Harvard University in Massachusetts, America. Now, it has become an annual event, and is a scientific award recognized worldwide.
The selection criteria is research which “first makes people laugh, and then makes them think”, and similarly to the genuine Nobel Prize, the Ig Nobel Prize is made up of several different categories.

In recent years, the Japanese winners of the Nobel Prize have been buzzed about, but in actuality, Japanese researchers have been awarded the Ig Nobel Prize for 13 consecutive years, beginning from 2007.
The 2019 winner was Professor Watanabe Shigeru and his 5-man team from Meikai University. They were awarded the prize for their study on the “estimation of the total saliva volume produced per day in 5-year-old children”.

What is the content of this year’s Japanese Ig Nobel Prize-winning study?

In 2019, Professor Watanabe’s team won the Ig Nobel Prize for chemistry. Their study involved measuring the amount of saliva produced by 5-year-olds in order to maintain the cleanliness of their oral cavity.

The study consisted of the researchers feeding 5-year-old children a pre-determined volume of food, having them chew and then spit the food out without swallowing, then measuring the spat-out food and comparing the volume to that at the beginning of the experiment. Through this, the researchers estimated that the children produced about 500 milliliters of saliva per day.
At the awards ceremony, the researchers reenacted the experiment using a banana.
This can be seen from 0:14 in the video.

The winners of the prize have only 60 seconds to make a speech, with a girl named Miss Sweetie Poo crying out, “Please stop! I’m bored!” if that time limit is breached. This can be seen from 0:53 in the video.

The awards ceremony begins with the audience throwing paper airplanes at the stage, followed by the winners entering on a rope. From start to finish, the venue is filled with laughter.

It might seem difficult to win an award for science, but the Ig Nobel Prize is a unique international science award overflowing with humor and, occasionally, irony.
However, the academic papers concerning these award-winning research studies have even been published in the English science journal “Nature”, showing that these studies have genuine scientific significance.

These are some of the main Japanese prize winners.

・1992 Kanda Fujihiroshi (Medicine): For the discovery of the chemical compounds responsible for foot malodor. The first Japanese winner.
・1997 Maita Aki (Economics): For “Tamagotchi”, which diverted millions of man-hours of work into the husbandry of virtual pets. That year was a double win for Japan, with the prize for Biology awarded to Yagyu Takashi.
・2002 Sato Keita and others (Peace): For inventing Bow-Lingual, a dog-to-human language translation device
・2004 Inoue Daisuke (Peace): For inventing karaoke, allowing people to spend a peaceful time together
・2016 Higashiyama Atsuki and others (Perception): For investigating whether things look different when you bend over and view them between your legs
All of these and more are part of the 71 Japanese winners of the Ig Nobel Prize as of 2019.

Although Japan has a significant number of Ig Nobel Prize winners even compared to countries worldwide, in Asia, South Korea’s professors as well as religious experts have also been recipients of the prize.
In addition, the study “cats are liquids”, which trended on the Internet, was actually conducted by a team of researchers from France.
Of course, though cats are solid beings, they have extraordinary flexibility, and thus are occasionally seen as liquids. This humorous thesis invited many laughs from the audience.

The reward for winning the Ig Nobel Prize is 10 trillion Zimbabwe dollars!
However, this is a currency no longer in circulation and thus not even worth a penny…