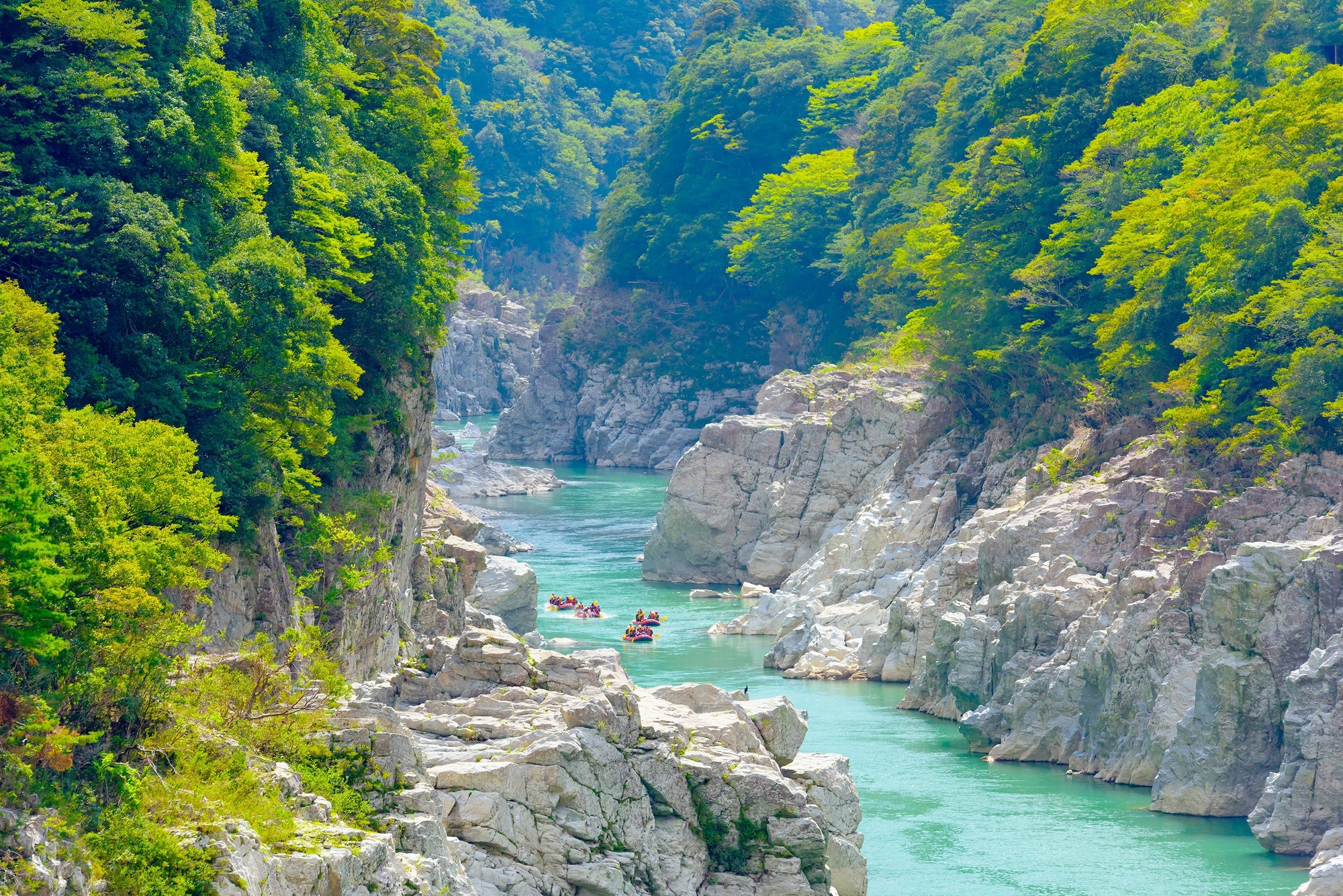 As you can see from 0:45 in the video, Tokushima City, Tokushima Prefecture, has a traditional culture called Awa Ningyo Joruri (a type of traditional puppet theatre), which is a nationally designated Important Intangible Cultural Property.
In addition, Awa Aizome (indigo dyeing), seen from 0:39, is one of Tokushima's traditional industries.
At the Aizome Craft Center (藍染工芸館, Aizome Kougeikan), you can experience aizome dyeing classes and buy craftwork that give you a sense of history and culture, as souvenirs.

In addition, Tokushima is dotted with many historical heritage sites, such as ancient tombs, temples, and shrines.
A valuable excavation site can be seen at Awashima Historic Park.
It's a recommended sightseeing route for taking walks in Tokushima while feeling the history and culture.

And there's another recommended activity that you can enjoy with your children!
That is, climbing the mountain, Bentenyama, which is famous as the smallest mountain in Japan.
Adults can reach the summit in 1 minute!
If you climb the stairs, there is a shrine that enshrines Benzaiten, so why not enjoy a casual mountain climb with your kids and bring along some lunch to enjoy as well?
The Tokushima Zoo, where you can experience feeding animals, is also a little-known tourist spot.

Tokushima is full of finger-licking-good gourmet spots!
The one we recommend most is the local okonomiyaki "Mametentama," which can only be eaten in Tokushima.
This is sweetly stewed Kintoki beans made into tempura (Kakiage in Tokyo style) and then made into okonomiyaki.
The okonomiyaki sauce and sweet beans are a perfect match and are totally addictive.

If you get tired of walking, you can always take a break and try Tokushima's famous Taki-no-yakimochi, at a cafe in Mt. Bizan.
Taki-no-yakimochi is a local dessert that uses the famous water from Kinryosui Spring on Mt. Bizan, which was loved by successive generations of Tokushima feudal lords.
Matcha goes great with the slightly sweet mochi.
If you're hungry, try Tokushima's specialty, Niku-dama ramen, and replenish your stamina!
You can see the popular gourmet foods of Tokushima prefecture from 1:21 in the video.

You can see the whole view of the cityscape of Tokushima City, Tokushima Prefecture from Mt. Bizan.
Also, you can climb to the mountaintop from the 5th floor of the Awa Odori Hall (阿波おどり会館, Awaodori Kaikan) by ropeway; and during this, you can enjoy traveling through the air while enjoying a spectacular view of Mt. Bizan and the sea.

Awa Odori is a must-see for anyone sightseeing in Tokushima.
Awa Odori has a male dance and a female dance, and the dance is performed by an organization called "Ren" (連).
Every August, the city of Tokushima comes to life with many locals and tourists attending the event.
You can see the scenes of Awa Odori from 1:51 in the video.

Summary of the Attractions of Tokushima Prefecture

In this article we introduced 5 exciting activities to enjoy in Tokushima Prefecture, but what do you think?
The Yoshino River crosses through Tokushima, the city of water, and the sea of Tokushima is a mecca for surfing in Japan's Chugoku and Shikoku regions.

In Japanese mythology, Shikoku is said to have been the first Island created in the Japanese archipelago, and it is a historically valuable place.
Be sure to visit Tokushima Prefecture, a place of mythology, water, culture and history!
When the Awa Odori Festival is held, reservations for hotels and inns will be limited, so we recommend making reservations early.