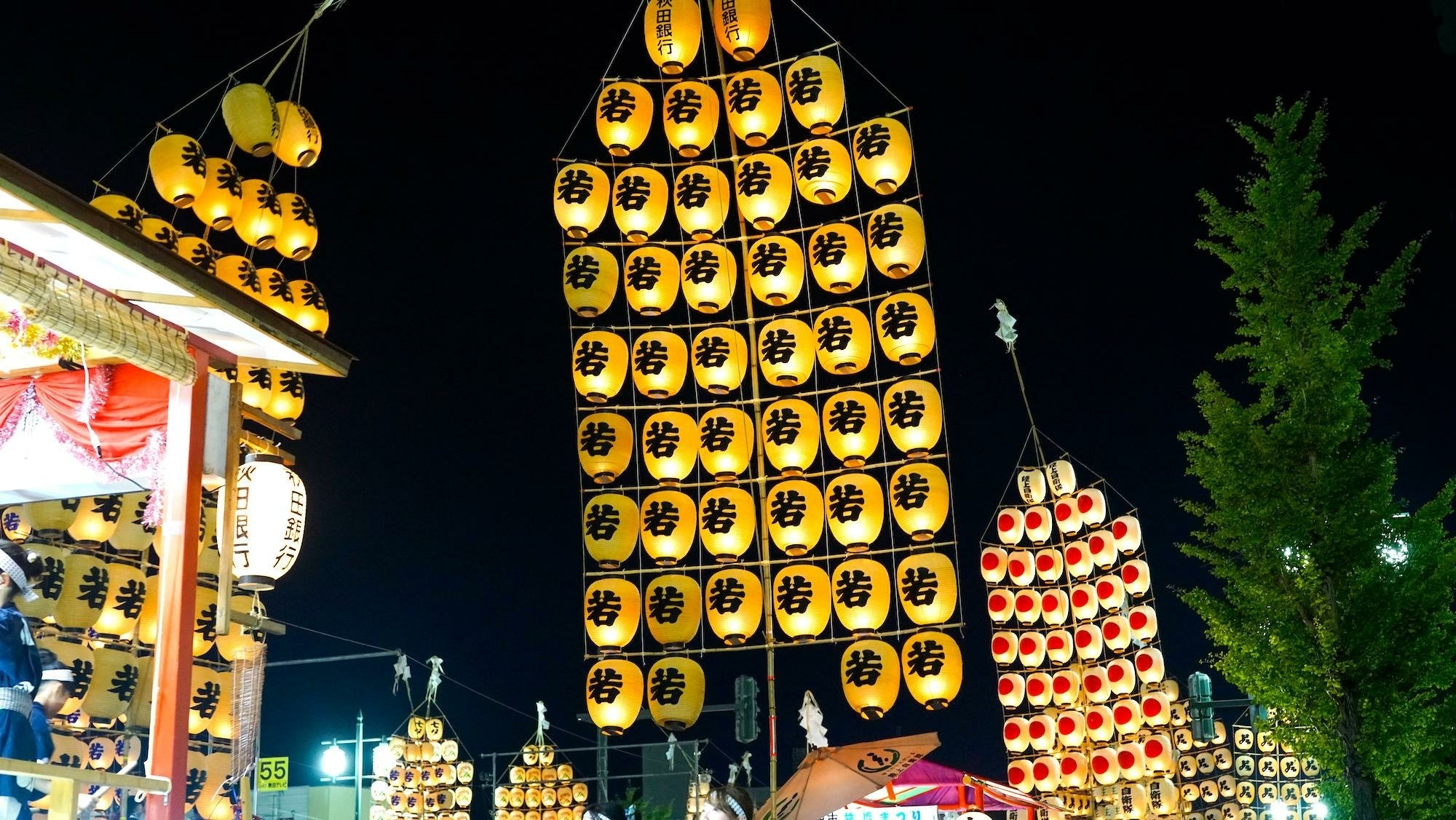 This video, titled "Akita Kanto Festival to Be Held for the First Time in 3 Years" (秋田竿燈まつり 3年ぶりに開催), was uploaded by "The Asahi Shimbun Company."
The Akita Kanto Festival, held in Akita City, Akita Prefecture, is known as one of the three major festivals in Japan's Tohoku region. Approximately 280 poles and 10,000 lanterns light up the summer night sky. This year's festival, which was held for the first time in three years due to the effects of the novel coronavirus, can be enjoyed in this immersive video.

Akita Kanto Festival – The History of the Festival

The Akita Kanto Festival attracts people with the skillful manipulation of the heavy poles and lit lanterns shaped like rice bales that resemble glowing ears of rice.

Along with Aomori's Nebuta Festival and Sendai's Tanabata Festival, the Akita Kanto Festival is one of the three major summer festivals in Japan's Tohoku region. It's an event that has been passed down for approximately 270 years to pray for the exorcism of evil spirits and a good harvest, and is designated as a National Important Intangible Folk Cultural Property.

According to literature, the Akita Kanto Festival first appeared in 1789 in a travelogue by Tsumura Soan, a merchant, poet, and scholar of Japanese studies in the mid-Edo period, titled "A Snow-Covered Road." It is said to have originated from an event called "Neburi Nagashi" held around Akita City on July 6 of the lunar calendar, in which people decorated bamboo branches and silk trees with strips of paper with wishes written on them, walked through the town, and finally floated them away in the river. Later, the spread of candles during the Horeki period (1750-1765) and the use of tall paper lanterns were combined to form what we see today.

The many hanging lanterns shown in the video show the beauty of the event as they light up the summer night sky.
[Video] 0:16 - Lanterns Lighting Up the Night Sky

The largest of the poles, called 'Owaka,' is 12 meters long and features 46 64cm x 45cm lanterns hanging from it, weighing a whopping 50 kilograms (110 lbs)! The highlight of the festival is watching the skilled performers holding these lanterns high in the air on the palm of their hand, while transferring them to their foreheads, shoulders, and even waists.
[Video] 0:31 - Skilled Performers Balancing Lantern Poles

The Akita Kanto Festival is also popular for the many food stalls set up at the festival site, including Kanto Yatai Village (竿燈屋台村, Kanto Yatai Mura), which has two locations, and the Local Gourmet Festival (ご当地グルメフェスティバル, Go-Touchi Gurume Festibaru) hosted by the Akita Chamber of Commerce and Industry, where visitors can enjoy local delicacies.

In these food and beverage areas, consideration has been given to preventing the spread of the new coronavirus, such as by changing spaces to avoid dense crowding.

The venue for the Akita Kanto Festival is Kanto Odori Street (竿燈大通り, Kanto Odori), a 15-minute walk from JR Akita Station. Spectator seats are set up around the center strip of the 800-meter-long boulevard, and traffic will be limited around the venue in the evening.

Tickets for spectator seats are also available, with prices varying by seat type.
The price for the "Masu-seki" (box seating with a capacity of 6 people) is 25,000 yen, S seats are 4,000 yen, A seats are 3,500 yen, and B seats are 3,000 yen. 2022 is the first year that the number of spectator seats has been reduced by 20% compared to previous years due to measures to prevent the novel coronavirus from spreading.

In addition, events such as "Fureai Kanto" and the "Citizens' Parade" (市民パレード, Shimin Pareido) will be cancelled due to the coronavirus, and pre-recorded voices will be used for chanting.

The many lanterns that light up the night sky and the skill of the performers who manipulate the lanterns is what makes the Akita Kanto Festival one the most popular summer events in Akita Prefecture. Each year, the festival attracts many people from both inside and outside of the prefecture.

There are many hotels near Akita Station and the festival site where visitors can stay overnight. Easy access from the station makes it convenient for travel and sightseeing.

In this exciting video, you can see the charm and highlights of the Akita Kanto Festival, as well as the fresh faces reflecting the joy of the people who are celebrating the festival for the first time in three years.
[Video] 1:05 - Comments from Performers at the Festival

We hope that at next year's Akita Kanto Festival, we'll be able to hear the taiko drums, hayashi band, and the chanting of the performers and crowd instead of prerecorded voices!