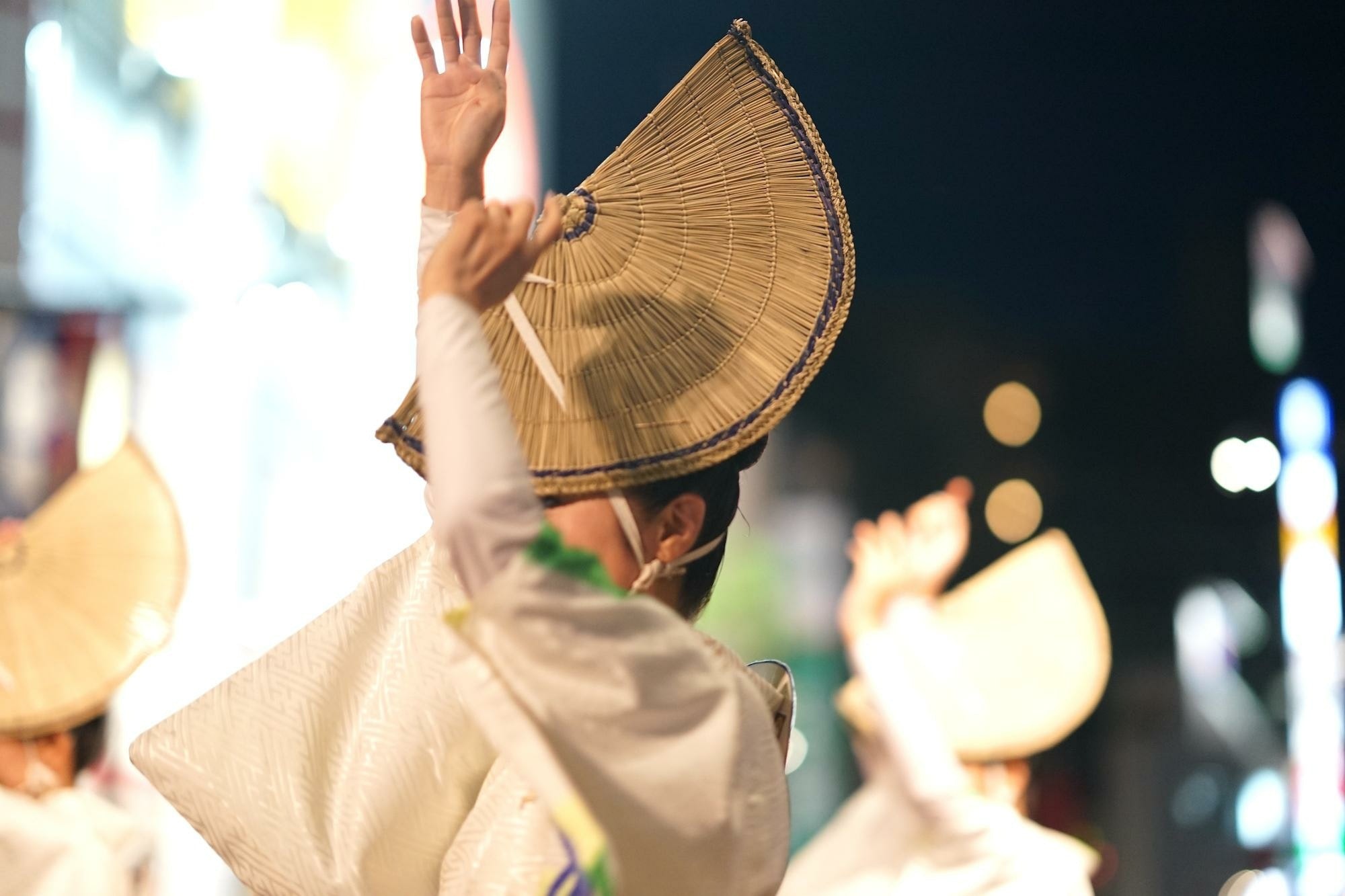 The video features a Russian woman who learned about Japan through watching anime and fulfilled her dream of wearing a yukata at a Japanese festival. Various food stalls lined up along the river, rows of lanterns, and the exciting Awa Odori dance are just a few of the many photogenic shots throughout the video. Awa Odori is one of the most popular festivals in Japan, and can be enjoyed by men and women of all ages, and even by foreign travelers. Be sure to follow along as you watch the video!

There are various theories as to the origin of Awa Odori, including Nenbutsu Odori from Japan's Kamakura period, Furyu Odori from the late Warring States period, and celebratory events held at the time of the construction of Tokushima Castle. In any case, Awa Odori has taken root among the citizens and has been passed down through the generations, even overcoming frequent bans. Awa Odori is known as one of Japan's traditional performing arts.

One of the three major Bon Odori dances in Japan, Awa Odori attracts approximately 1.3 million people, and there is said to be about 100,000 dancers in groups called ren (連). The dance style is characterized by a male and female version, and various types of Awa Odori can be seen from daytime to nighttime at theaters and other viewing spots.

In addition, Awa Odori Kaikan (a museum in Tokushima where visitors can learn about Awa Odori) has been making efforts to accommodate foreign tourists in recent years by providing English- and Chinese-speaking staff at the reception desk.

During the Awa Odori Festival, the central area of Tokushima City is filled with lively dancing and excitement, and the many food stalls and lanterns add to the festive atmosphere.
[Video] 2:34 - Food Stalls and Lanterns at Awa Odori

Awa Odori can be enjoyed by men and women of all ages and is accompanied by enthusiastic cheering from the crowd. It also features unique costumes and dancing styles for both men and women.
The men wear happi coats or yukata in a unique style, and their dynamic performance, called "Otoko Odori," is very lively and exciting to watch.
[Video] 0:30 - Otoko Odori

"Onna Odori," the women's version, is characterized by elegant and graceful hand gestures and footwork repeated at a mesmerizing tempo. In the video, you can see a woman wearing a happi coat and performing "Otoko Odori."
[Video] 0:17 - Women Performing "Otoko Odori" While Wearing Happi

Also popular is the "Chibikko Odori," a children's version of the dances. One of the highlights of the performance is the musical accompaniment, which combines instruments, such as shamisen, drums, and flutes, to enliven the dance, and the unique musical style of each dance troupe. The light, two-beat tempo creates a stage where both the dancers and the audience can enjoy a sense of unity.
[Video] 0:54 - Audience Members Participating in the Dance

Koenji Awa Odor in Tokyo is second in scale only to the Tokushima City Awa Odori and is known as a summer tradition in the area. The event is held every year in late August, and its history dates back to 1957, when it was started as a town revitalization event. The event in the shopping district led to the expansion of the event to surrounding towns and neighborhood associations, and today it is known as "Tokyo's Awa Odori" with 10,000 dancers, attracting many visitors. In addition to dancers from the Tokyo metropolitan area, dancers from Tokushima, the home of Awa Odori, also participate in the festival, adding to the excitement.

Summary of Awa Odori, a Dance For Anyone to Enjoy

Awa Odori is a popular summer event in Japan that tourists and foreign travelers can enjoy together. In the video, a woman in a yukata from Russia conveys the beauty of Japanese culture through Awa Odori. If you're planning on visiting Japan this summer, we highly recommend checking out Awa Odori, it's a dance that you can both watch and participate in, and will create a lifelong memory of your visit to Japan!