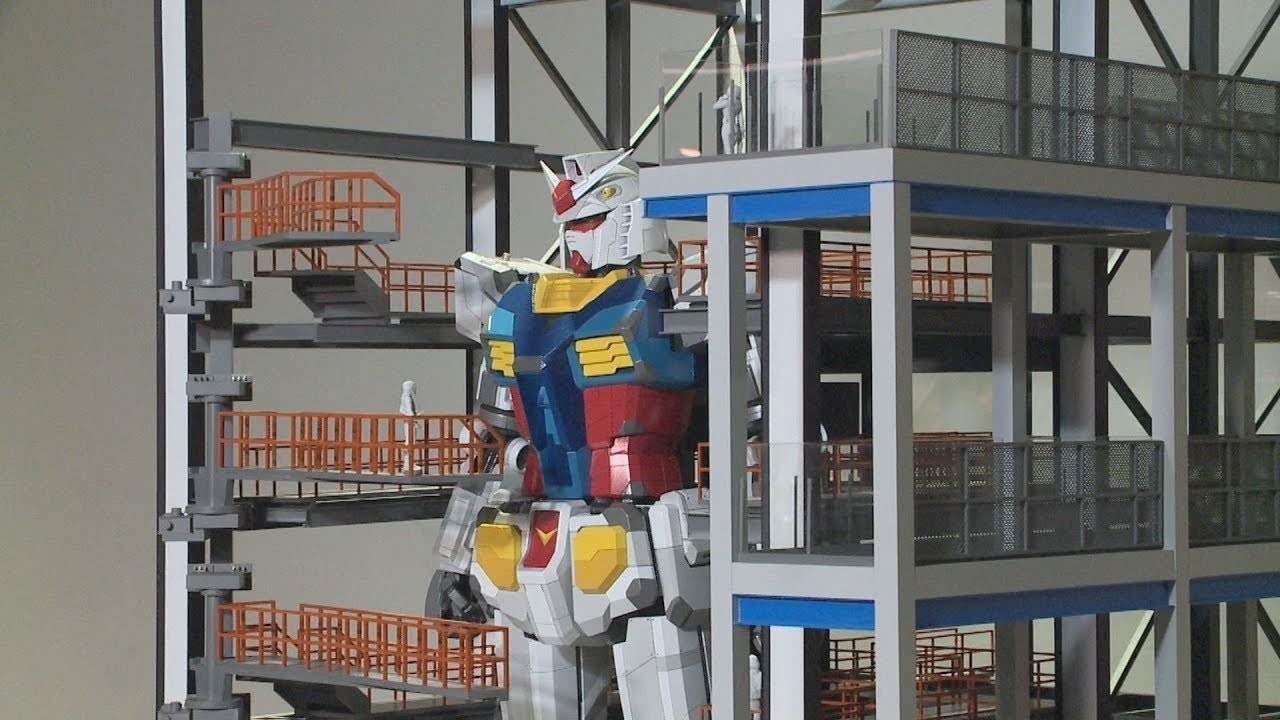 The Moving, Full-Scale Gundam Planned to Be Built in Yokohama

"A Full-Scale Moving Gundam in Yokohama｜To Open in October" (動く実物大ガンダム間近で 横浜、10月に施設オープン), is a video introducing the plan for an actual moving Gundam.

The popular anime series Mobile Suit Gundam was a social phenomenon that captured the hearts of children and adults alike.
The construction plan for a facility where you can actually see a full-scale version of the Gundam (model number: RX-78-2) up close and in action, has started at the Yamashita Pier (山下ふ頭, Yamashitafuto) in Yokohama.

This article introduces the full-scale Gundam set to be built in Yokohama alongside the video.

What Is Mobile Suit Gundam?

Mobile Suit Gundam is a televised anime series about giant robots that was broadcast in Japan from 1979.
The main character was Amuro Ray, and the show depicted a conflict between people that completely defied the conventional wisdom of the mecha anime genre.
It also gave birth to new buzz words such as "Char" and "Newtype" capturing the hearts of adults and children alike.

Even today, more than 40 years after the show's broadcast, sequels are being broadcast and Gundam series toys, Bandai plastic models called "Gunpla," and figurines are being sold one after another, and the popularity of the series continues to grow.

The "GUNDAM GLOBAL CHALLENGE project" is a group built around Representative Director Yasuo Miyakawa, with the purpose of building a moving, full-scale model RX-78-2, which is one of the main mobile suits that appears in Mobile Suit Gundam, which is celebrating its 40th anniversary since its premier.

It's planned to be built at Yamashita pier,in Yokohama.
You can see the outline of the plan being explained at a press conference at 0:08 in the video.

The Gundam is planned to be 18 meters tall when standing, weigh 25 tons, don carbon armor, and have an actuator that allows for 24 degrees of freedom. It's truly an actual gundam!
The design is the Gundam used by the popular character Amuro Ray, and it will be operated remotely by a pilot outside of the Gundam.

Life-size Gundams have been built before in Odaiba(お台場,Odaiba) and Shizuoka (静岡,Shizuoka), but this plan in Yokohama is the first attempt to create a moving full-scale Gundam, and it is catching the attention of Gundam fans all over the world!

GUNDAM FACTORY YOKOHAMA is a facility scheduled to open at Yamashita pier, Yokohama, on October 1st, 2020, and is built so that you can see the moving full-scale Gundam from the same point of view as in the anime.
This is explained in detail at 0:18 in the video.

The main facilities are "GUNDAM-CARRIER" which supports the gundam from behind, "GUNDAM-DOCK" where the gundam is stored, and "GUNDAM-DOCK TOWER," explained using a model from 1:12 in the video. This is a special viewing space where you can see the gundam up close from 15-18 meters high.

The facility is built so that visitors can enjoy and experience every corner of the full-scale gundam with the view of Yokohama city in the background.

In addition, "GUNDAM LAB" is also being built in the facility.
This is planned to be a spot that all Gundam lovers can enjoy — it has an exhibition facility explaining how the moving life-size Gundam works, shops, cafes, and communication spaces!

Summary of the Moving, Full-Scale Gundam

Since it was first aired as a robot anime produced by Sunrise Inc, it has become very popular not only as an anime, but also in video games and manga, and after 40 years, a gundam is finally being built in real life.
This article introduced the moving life-size Gundam planned to be built in Yokohama, alongside the video.
Are you excited to see the giant gundam up close?
The gundam walking plan to be held in Yokohama is an embodiment of the dreams of many people- that a gundam would move for real someday.
Think you can wait 'til October 2020?

If this article and video is your first time hearing about the project, or if you're just curious about it, don't forget to visit Yokohama in October!