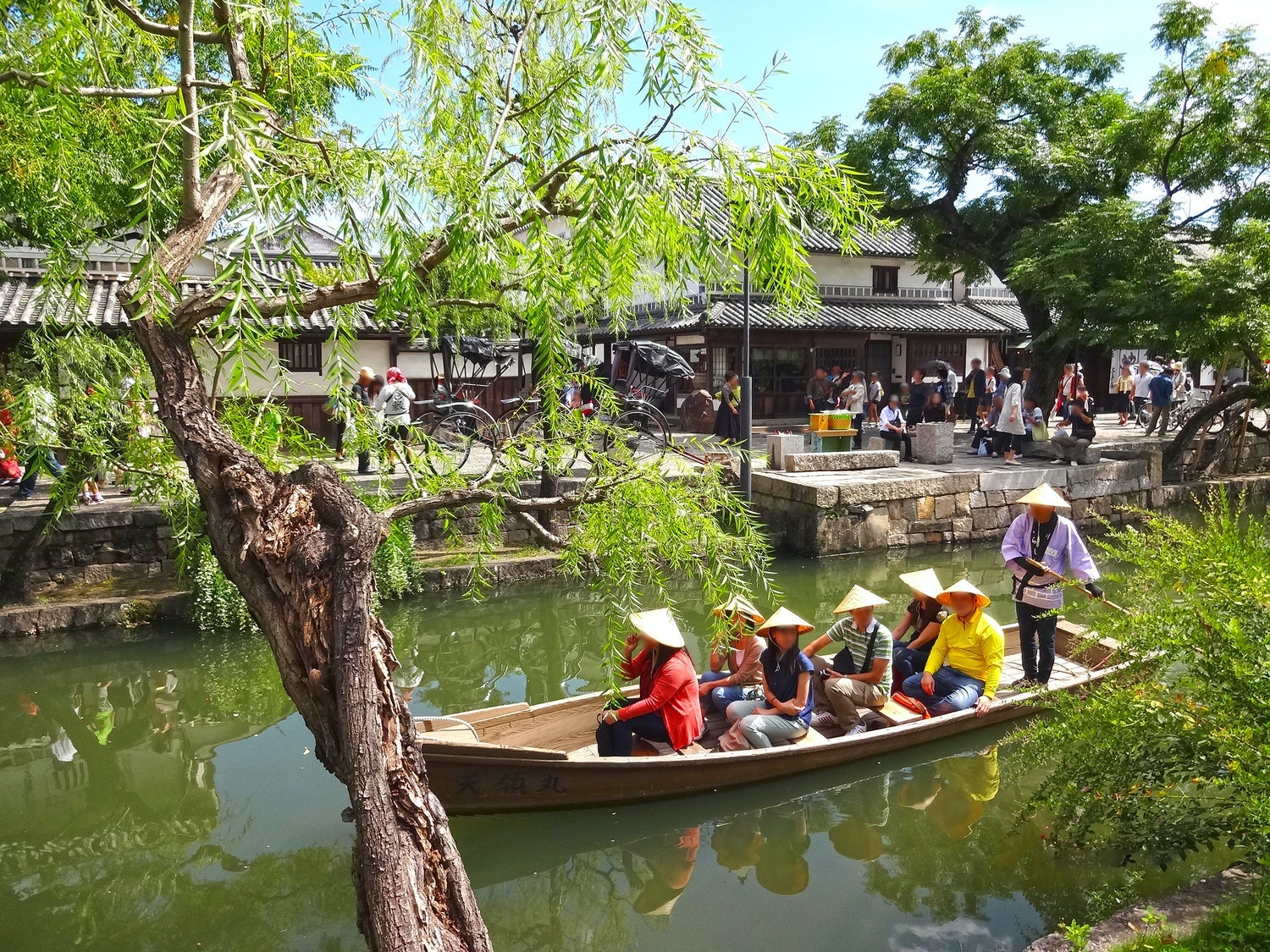 In this video, you'll see a woman traveling to famous tourist attractions in Kurashiki, Okayama .
You'll definitely see something you like while watching this video!

The woman was traveling alone at first, but met someone on her trip and they began to travel together. It even has a nice story for you to enjoy!

First, the tourist spot being shown at 0:07 in the video is "Kurashiki-kawa Funenagashi."
A boatman wearing a happi will guide you downstream in a river boat called Tenryo Maru, along the Kurashiki River, which flows through "Kurashiki Bikan Chiku, where historical buildings with white walls and tiled roofs line the river.
The townscape of the Kurashiki Bikan Chiku area was created during the Edo Shogunate era and it is one of the more popular sightseeing places in Kurashiki.

If you take a walk in the Kurashiki Bikan Chiku, you'll find people wearing yukatas, a traditional Japanese aesthetic, tea making, rickshaw rides, traditional Japanese style lunches, souvenir shops, and more. There's plenty to do, so you'll definitely be able to enjoy the atmosphere of Japan.

The Ohara Museum, which can be seen from 0:16 in the video, is a 15-minute walk from Kurashiki station, and it is the first private western art museum in Japan.
The area around Kurashiki is an area in which many museums and archaeological museums are situated. Besides the Ohara Museum, there's the Igarashi Yumiko Museum and the Kurashiki Folk Art Museum.

In Kurashiki, there's plenty of ways to experience Japanese history and culture.
Achi Shrine, which is shown at 0:22, is known for having the oldest and largest Akebonofuji tree in Japan. The tree is said to be 500 years old.
If you travel out of Kurashiki to Soja, you can also see the five-story pagoda of Bicchu Kokubunji Temple which can be seen from 0:51 in the video.

Okayama prefecture is also the birthplace of the Japanese folk tale legend, Momotaro.
Kinojouzan (Kinojou), which can be seen at 1:01 in the video, is a strange mountain castle, with a history shrouded in mystery.
There's a legend that says that the demon that appeared in the Momotaro legend lived in this castle.

When traveling in Japan, going to the tourist spots is a given; however, we also recommend checking out the traditional crafts rooted in the region's history.

At 1:05, you can see Okayama's Bizen swords, which are of the highest quality and quantity in Japan.
Okayama is even called "The Sacred Land of Swords."
It's also famous for finely woven floral patterns and geometric patterns woven into mats called Hana-goza.
Shown at 1:51, is a "Rokuro" (pottery wheel). You can enjoy a pottery making experience here as well!

Other traditional crafts of Kurashiki include, Kurashiki Hanpu (Kurashiki canvas), Kurashiki glasswork, and Kurashiki denim. There's also Kojima Jeans Street, where many jeans makers have their shops.
Kurashiki is also famous for its masking tape, and there is a tour of a masking tape factory where you can tour the factory of "mt," a manufacturer of masking tape.

The Local Cuisine of Kurashiki, Okayama

Kurashiki is also famous for producing fruit and is called "The Kingdom of Fruit."
Okayama is called "The City of the Fruit Parfait," and you can taste unique fruit parfaits at hotels, cafes, and other confectionery shops.

You can also eat fresh seafood in Okayama prefecture, as it's next to the sea.
Sawara is a sashimi especially popular among the locals.
In addition, there's a lot of popular local cuisine, such as oysters, Hiruzen yakisoba, Tsuyama hormone udon, Nissei kakioko, and Okayama demi-glace katsudon!

There are still a ton of great sightseeing spots in Kurashiki that aren't shown in the video!

Ivy Square is a tourist complex that includes a hotel and cultural facilities. It's a western-style wooden structure that was built in the Taisho era and was made using the exterior of a factory built in the Meiji era.
It has since been reborn as the tourist information center "Kurashiki-kan."
There's also Kurashiki Coffee’s "Kurashiki Teien," "Hayashi Genjuro Shoten," and "Kurashiki Roji Ichiba," all of which use old-fashioned warehouses and townhouses as they were built in the past.
Kurashiki hall is also a retro-style building that blends into the townscape.

If you want to see the sea, you can go to the port town of Shimotsui and stroll around Shimotsui or Tamashima, a retro town of Kurashiki from the Showa period.
On a clear day, you can view the islands in the Seto Inland Sea and the Seto Ohashi Bridge from Washuzan in the Seto Inland Sea National Park, the first national park of Japan. It's a scenic location in the great outdoors, and a great place to take Instagram photos.

The sea in Kurashiki is also developing as an industrial zone, and you can check out the Mizushima Industrial Zone in the Mizushima Waterfront DIstrict.
As for the shopping areas, there's the Kurashiki Aeon Mall and Mitsui Outlet Park Kurashiki so you'll have no trouble find places to shop.

You can also visit Kurashiki Civic Center, where music and drama events are held from time to time.

This article introduced many sightseeing spots in Kurashiki, Okayama Prefecture.

The solo traveler from overseas who was enjoying her solo trip in Kurashiki managed to befriend a Japanese woman who she met coincidentally at a guest house.
They went sightseeing in Kurashiki together and enjoyed their trips in Kurashiki even more.
Maybe you can make a friend on your journey as well!

She enjoyed the summer festival (Kurashiki Tenryo Summer Festival/Kurashiki Haruyoi Akari) by wearing a yukata and going to the food stalls; however, this kind of sightseeing was most likely made possible by meeting a local.

We hope that we've piqued your interest in visiting Kurashiki, Okayama. It's a great place to travel alone or with a friend!

You can visit Kurashiki by plane, bullet train, overnight train or express bus from famous cities in Japan.

Unfortunately, the heavy rains of 2018 caused extensive damage to Mabi-cho, Kurashiki, but the city has been gradually recovering since then.
There are tourist spots such as the Bisha monten ritsu-zo and Kibiji temple in Mabi-cho, Kurashiki as well.
Why not visit here and help support the victims?