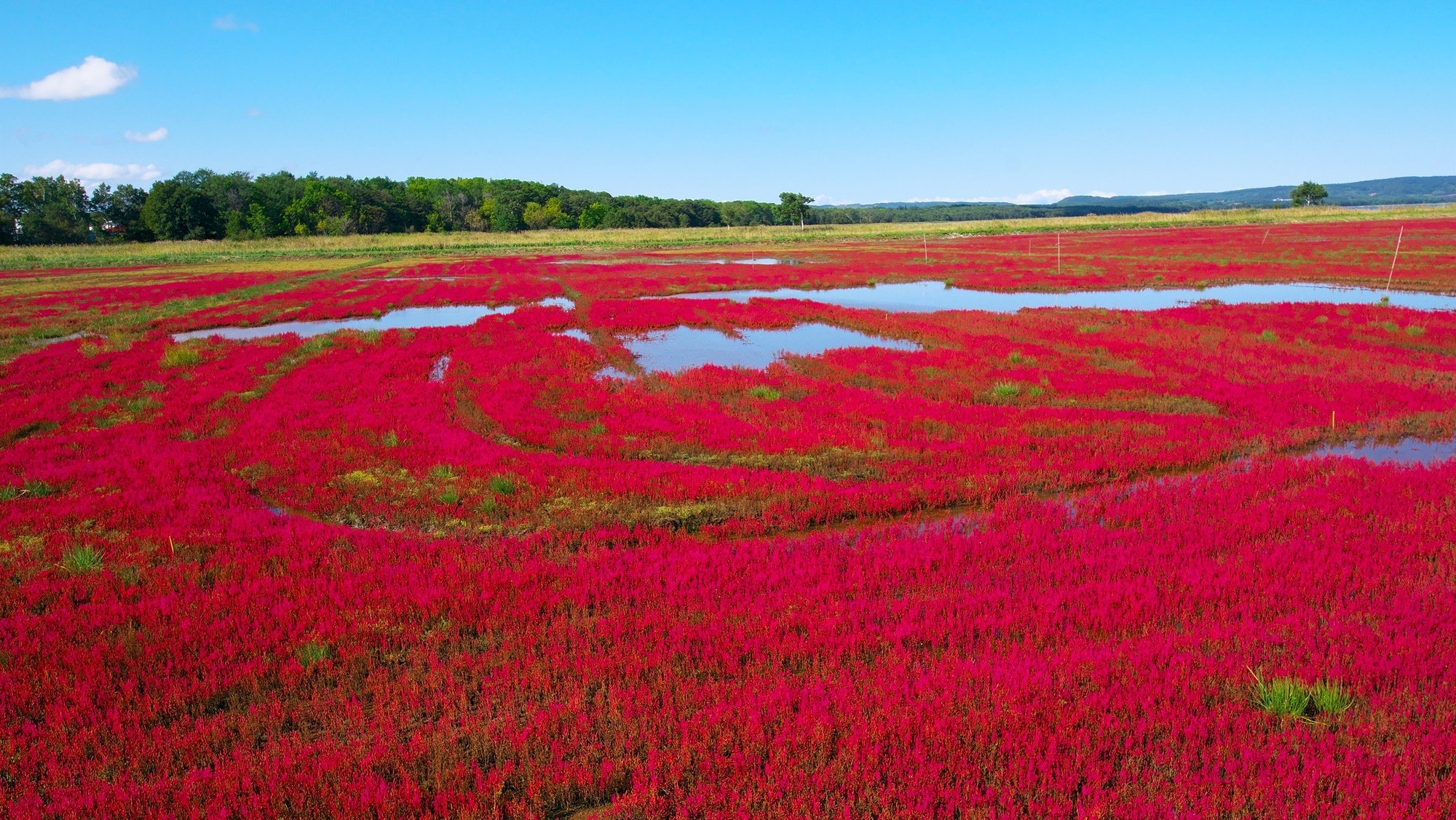 Hokkaido is one of the most popular tourist destinations in Japan, attracting many foreign tourists every year thanks to its natural beauty.
"In this 4K video, you can see the rare carpet of sea asparagus at Lake Saroma in Hokkaido, which is known as "Japan's best red carpet."

As glasswort, an annual plant, grows, its flesh stores a large amount of salt, giving it a firm texture and salty taste.
The leaves and stems are edible, and it is called sea asparagus because of its resemblance to asparagus, and is used in cooking in parts of Europe.
Lake Saroma is the largest brackish lake in Japan and faces the sea, making it ideal the ideal environment for sea asparagus to grow.

The Sea Asparagus at Lake Saroma in Hokkaido

Salicornia Europaea, this variety of sea asparagus, has been registered as an endangered species.
Lake Noto in Abashiri, Hokkaido, is home to one of the largest colonies of sea asparagus in Japan, which is artificially cultivated with a tractor to suppress the growth of other halophytes (salt-tolerant plants).
Lake Saroma, shown in the video, is one of the few areas where sea asparagus is cultivated.

In Japanese the plant is often called "Sango-so" (サンゴ草: lit. "Coral grass") because its tips are red and resemble coral.
You can see a close-up shot of the coral-like glasswort at 3:13 in the video.

Sea asparagus is a plant that tastes salty when eaten raw, so it is commonly boiled and eaten as is.
It is also delicious when added to pasta, stews, and other boiled dishes.
In recent years, it has been distributed in supermarkets across Japan, so be sure to try it if you have the chance.

It is rich in minerals and amino acids such as magnesium, which Japanese people tend to deficient in, and the extract of sea asparagus is so nutritious that it is used as an ingredient in many supplements.

Summary of Sea Asparagus at Lake Saroma in Hokkaido

Lake Saroma in Hokkaido is part of the Abashiri Quasi-National Park, and is famous as an area that cranes fly over every year in early September when the autumn leaves begin to change color.
You can see one of these cranes at 3:17 in the video.
Sango-so Matsuri (能取湖さんご草祭り) a sea asparagus festival at Lake Saroma is held from early to mid-September, and a sightseeing bus called "Dollymint Okhotsk-go" (ドリーミントオホーツク号) operates there.

As it is not a place with convenient access, many tourists visit by rental car, so be sure to research details on parking and other events in the area.