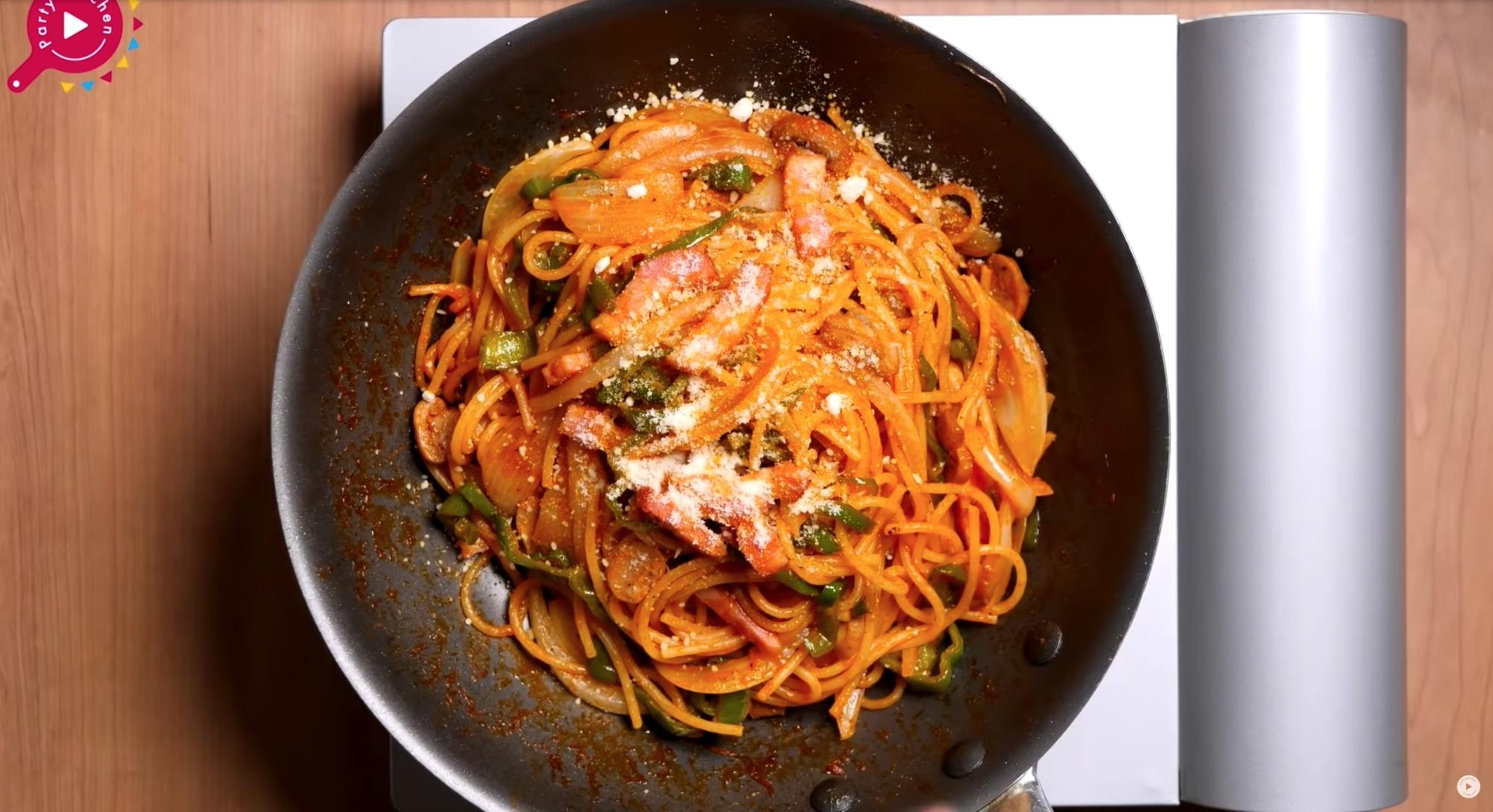 A Recipe for the Popular Neapolitan Pasta!

This video, titled "Quick and Authentic! The Family Favorite Neapolitan Pasta! One-Pan Dish! Party Kitchen Cooking Recipes" (簡単本格！懐かしの『ナポリタン』の作り方【ワンパン】【料理レシピはParty Kitchen】), teaches you how to cook the popular Neapolitan pasta with easy to follow instructions and a touch of humor!

Neapolitan spaghetti is, contrary to what most people expect of pasta, a traditional Japanese-style pasta dish using vegetables and tomato ketchup.
Neapolitan spaghetti is a typical dish served at cafes and European-style restaurants all over Japan.
After watching this video, you're sure to want to have a go at making this delicious pasta dish which has evolved with Japanese cuisine over the years.

How Did the Neapolitan Pasta Dish Come to Be a Part of Japanese Cuisine?

Neapolitan pasta, named after the city Naples in Italy, may lead many people to believe it's an Italian recipe; however, this dish was actually created in Japan.
It dates all the way back to post-war Japan.
Due to the lack of food resources after the war, hotels had to come up with new ways to provide delicious food at a relatively low cost, and in doing so, created the Neapolitan spaghetti dish.

Neapolitan spaghetti gained huge popularity in the Showa period (1926-1989 AD) in Japan.
Hachioji city (八王子市, hachioujishi) in Tokyo even has its own special version of the dish using locally sourced ingredients called Hachioji Neapolitan which is quite popular.

How to Make Neapolitan Spaghetti

One of the great things about this dish is that it can be made in a single frying pan, and tastes just as good as a dish you'd get at a restaurant.
Check out the video to find out how it's made!

For starters, as you can see at 0:13 in the video, you'll need to fry sliced onions, green peppers (sliced into rings), mushrooms, and thickly sliced bacon in a pan with some olive oil.
Next, boil the pasta following the instructions on the packet (1:28) and once the boiling water has evaporated add in the ketchup and Worcestershire sauce.
From there, add in the already softened vegetables and mix to cover the spaghetti and vegetables in the sauce.
Finally, season to taste with salt and pepper, adding a little butter for creaminess and top it with powdered cheese and parsley to finish.

Just looking at the prepared dish with its deep red sauce and healthy amount of vegetables is enough to make your mouth water! You can see the completed dish at 2:40 in the video.

Summary of the Neapolitan Pasta Recipe

We hope you enjoyed the Neapolitan pasta recipe video.
Be sure to have a go at making this surprisingly easy yet delicious Japanese dish the next time you feel like having some italian!
Don't forget to use the video as a guide too!

If you're coming from overseas, we highly recommend trying out this Japanese classic. There are many well-established restaurants specializing in Neapolitan spaghetti that are well worth the visit!